The monstrous event that happened on June 4th, 1989 will be forever remembered as one of the most tragic days in human history. However, many decades ago, this event was foreseen and was foretold in the book, 1984, by George Orwell. Orwell saw the rise of totalitarianism, and he was deeply disturbed by what he saw. He believes totalitarianism will be the method that communist party adopts to fight freedom. The book foreshadows many of the events that will happen in a communist society.

Turn in your highest-quality paper
Get a qualified writer to help you with
“ Tiananmen Square Incident(1989) – compare to 1984 ”
Get high-quality paper
NEW! AI matching with writer

In many ways, the incident of Tiananmen Square in 1989 echoes 1984, which is a warning that totalitarian government is a power abuser, propaganda manipulator, and democracy suppressor.

Power Abusiveness”The party seeks power entirely for its own sake. We are not interested inthe good of others; we are interested solely in power. Not wealth or luxury or long life or happiness; only power, pure power…we know that no one ever seizes power with the intention of relinquishing it. Power is not a means; it is an end” (Orwell 275)1984’s view about totalitarianism’s power capturing is evidenced in Tiananmen Square incident 1989.

These points were shared by both the “Inner Party Members” and the leader of communist party in China. Both of them abuse their power to dominate their citizens.

“Big Brother”, a figure of the Inner Party Leader in 1984, is the power. The Party is “seeking absolute power for the sake of power and everything is sacrificed to that end” (Coles 58). Same as the “Big Brother”, Chinese leaders abused the power their people give to them.

Moreover, Deng abused his power not only by removing some inner party members who did not agree with him, but he also used power to suppress the democracy movement. The death of Hu Yaobang triggered the Tiananmen Square demonstration in the spring of 1989, from April to June. What had begun as a relatively minor movement blossomed into something much bigger, a movement for freedom and democracy. The students were calling for democracy, an end to corruption among top officials and an honest and direct dialogue with the leaders, who had the real decision-making power over the outer party. The students first tried to communicate with the government. They then went on hunger strike, fasting. Still the government took no response to the student’s suffering but instead declared martial law on May 20th.

Propaganda ManipulationJust as the similarity of power abusive between 1984 and 1989’s Tiananmen Square incident, propaganda is the tool which both of Oceania government and Chinese government use to manipulate their citizens. Oceania has developed three slogans as propaganda to mix its citizens mind;”WAR IS PEACEFREEDOM IS SLAVERYIGNORANACE IS STRENGH.” (Orwell 6)These slogans use psychological manipulation to maintain the Party’s power by putting “doublethink” (Coles 18) into the citizens and to accept what the government is doing, accepting constant war, accepting freedom deprivation, accepting history record alteration. Also the psychological manipulation gets the effect of physical control.

Same, The Chinese government adopts this policy through propaganda. Massive propaganda was used to put false information to the public, to scare its citizens by manipulating the media. Before the massacre, the government accused student as “ruffians” and “counter-revolutionaries” by broadcasting some modified news picture. After the bloodbath, China launched a massive “public education” campaign aimed to erasing the event from its history. (Liu 16) Their “truth” campaign insists that only 300 people, many of whom were troops and police, were killed instead of students. However, the USA estimates somewhere between 700-2600. Chinese controlled television was selecting many edited video of angry protesters holding torches, weapons and guns beating on hapless soldiers, to describe to public that soldiers were the victims. These aired shows along with massive “fear” campaign and life-sized posters all make the government and the soldiers seemed like the victim of “revolutionary thugs”As Oceania does, Chinese authority used propaganda to isolate all truth in the report by eliminating foreigners and their journalist. In Oceania, the majority of the people never saw much of the outsiders.

The only outsiders they see are the prisoner of wars or those that was hanged publicly. Chinese government saw foreign correspondents as a treat by exposing the truth. Foreign correspondent’s cameras were smashed and seized. They received threats from Chinese authority that the army was been given the right to shoot on sight anyone carrying a camera. (Liu 16) They were detained on Tiananmen Square for 20 hours, and their telephone lines were cut off. The government took over China Central Television, CCTV, China’s largest national TV network, during the times of protest. No CCTV camera crew or stuff was allowed to cover the stories and only copies provided by the army were read on-air. All television and radio was closely monitored and all of them portrayed the government as the “good guys” and the protesters as the “bad guys.” However, many journalists resisted secretly and filmed some of the most heartbreaking images ever witnessed.

Democracy SuppressionAs 1984 warned us about the future totalitarianism, and how the government of both country’s method of control is use of whatever force is necessary. In Oceania, secret policy is everywhere. People are taken to Room 101 and forced to agree things like 2+2=5. The same thing happens when people crossed the government in China, they were declared to be the enemy of the people and were exiled to some force labor camp and the next thing you know, you don’t even recognize your own family.

As the situation looked brighter for the student, the government unleashed their final triumph card. Deng Xiaoping sent 110,000 soldiers from five provinces on Beijing from east, west, and south and attempted to entry the city. However, as they attempt to enter Beijing under the cover of darkness, they were stopped by an incredible display of power from the people as many citizens used their body to block the road entering the city. Soon afterward, many soldiers themselves join along side with the students for the march to freedom.

However, Deng sent extra in 15,000 veterans. These guys aren’t like the first one; they are fiercely loyal to the government. Not only that, but they are also the biggest, meanest, and most hardcore of all the soldiers in China, and took no mercy as they butchered and fight their ways through the “army of people”, like a nine-foot tall footballer in a ring with a bunch of wannabes. The soldiers didn’t just whip students; they completely annihilated the “people’s army” and then humiliated them even more by rolling tanks over dead student bodies. The government responds to this event was their policy of “Kill 200,000 in order to gain 20 years of peace””A few agents of the thought police moved always among them, spreading false rumors and marking down and eliminating the few individuals who were judged capable of becoming dangerous…” (Orwell 74)

The method of total control was evidence in this quote from Orwell’s 1984. The Chinese government then mirrors the action of the thought police and started a reign of terror upon the citizens of Beijing after that. Secret police searched house by house and made many arrests, many of whom were innocent to their charge. Hot lines were set up for anonymous people to turn others in. One student leader was even turned in by his family (Liu 41). As many parents turn against their kid, the student’s struggle to survive mirrors many of the same struggle that parents of 1984 have to go through as evidenced in the Parson’s family case.

The martyrs of Tiananmen Square lie silent. They gave their life and spoke for all of us when they bravely took to the stage at the spring of 1989. The Goddess of Democracy was shattered, much like the glass paperweight in Orwell’s 1984. However, the bloodbath in Tiananmen Square will always be remembered, no matter how hard the government tried to cover it. It will always be the symbol of courage over brute force. Wherever there is a yearning for freedom, the Chinese Democracy Movement of 1989 will be an inspiration, a lesson and a warning. 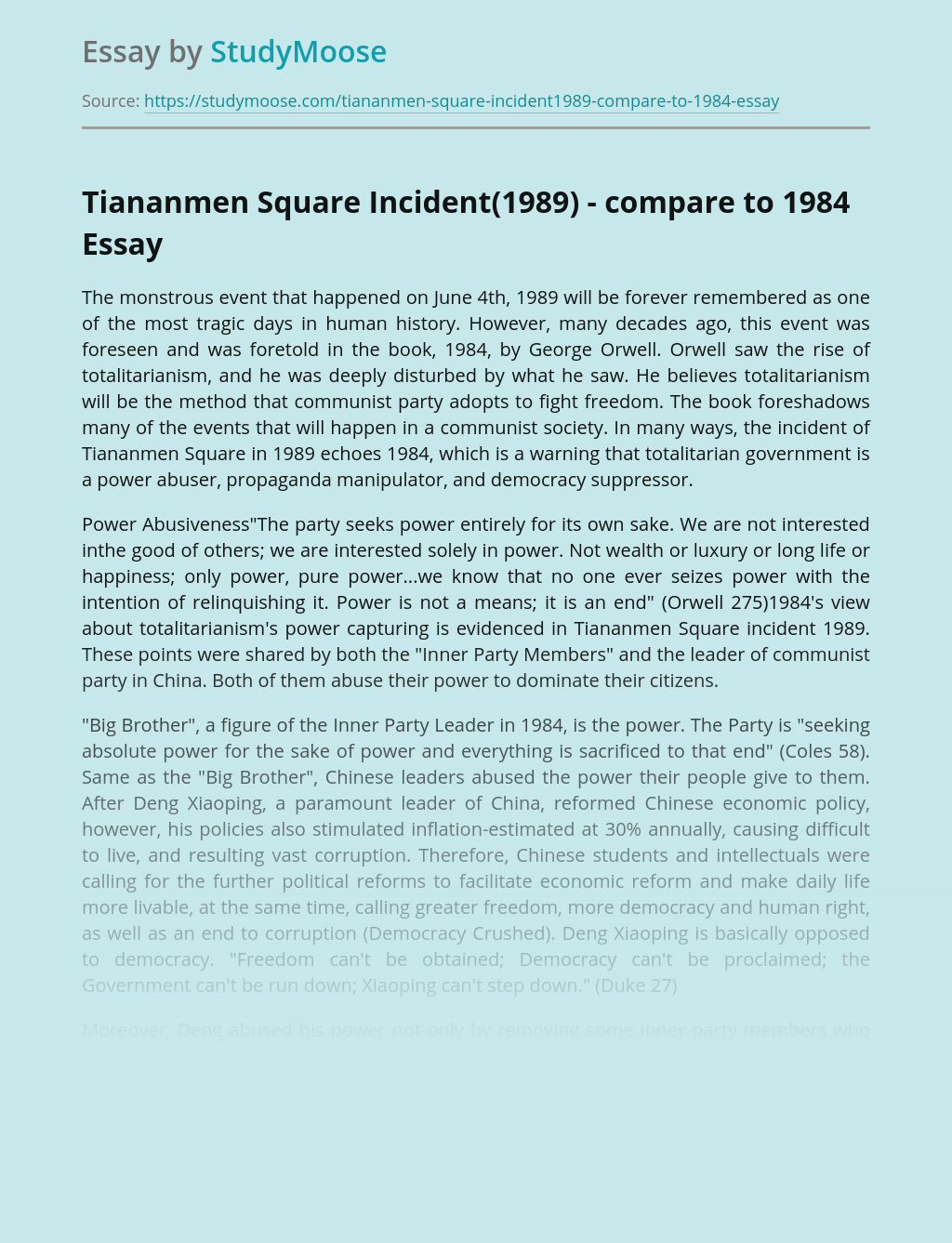 Turn in your highest-quality paper
Get a qualified writer to help you with
“ Tiananmen Square Incident(1989) – compare to 1984 ”
Get high-quality paper
Helping students since 2015
Stay Safe, Stay Original