There is such a plethora of fascinating stories out there that are just waiting to rise from obscurity I wish I had time to tell them all, it in an 8 minute time frame I cannot. I will instead leave you with one more charming story, the story of the one and only emperor of the united states. Joshua Norton was born in england to well off parents. But he spent most of his young life in british south africa as a part of the colonization efforts.

Don't use plagiarized sources. Get your custom essay on
“ Brazilian emperor Pedro the second paid a diplomatic visit to San Francisco ”
Get custom paper
NEW! smart matching with writer

Following his father’s death in 1848, Norton arrived in San Francisco and went into business in both retail and shipping. Norton was a very shrewd businessman and became one of the wealthiest citizens in the city. He lived in a lavish house and was a proper member of high society. Unfortunately for norton however, his good fortunes wouldn’t last forever. China, undergoing a huge famine, banned the export of Rice, which drove the price of rice to 36 cents a pound, twelve times its normal price.

Norton bought a 25000 dollar shipment of rice from Peru at only 12 cents a pound. He brought the rice back to san francisco, but by the time it got there, enough other shipments from peru got there that the price fell back down to its normal 3 cents a pound. Norton found himself at a tremendous loss, and promptly sued the man who sold him the rice. After a years long legal battle, Norton found himself without restitution for the rice, and buried in legal fees.

Norton declared bankruptcy, and was forced to sell his lavish house and found himself homeless. At this point, Norton had pretty much lost it. He decided he was done with being a normal citizen and he declared himself emperor of the united states.

Most of the time when a homeless man starts yelling that they are emperor, we cross the street and go on with our day, but for whatever reason, the san francisco chronicle decided to publish his declaration. Things just spiraled out of control from there. Other papers picked up the story and gave norton space on the front page to issue edicts and communicate with his subjects. Emperor Norton’s edicts are quite wonderful. He demanded that congress disband and demanded that the pope officially ordain him as emperor. He also declared that calling san francisco “Frisco” would be punishable by a $25 fine. While congress still exists, and he was never actually ordained by the pope, some of norton’s edicts actually happened, though he didn’t live to see them. He called for the establishment of a “league of nations” to resolve international issues a full 40 years before the actual league of nations was founded. He also called for the creation of a bridge between san francisco and oakland, almost 70 years before the golden gate bridge was opened.

At one point Norton was Arrested and the police attempted to commit him to an asylum, but after the public went utterly bonkers and every paper in the city called for his release, norton was set free. He issued a “royal pardon” to the man who arrested him, and from that point on, any police officer would salute him as he passed. Norton could expect to eat free at any lunch counter, to ride public transport free, and to receive occasional “tax payments” from citizens. He issued his own currency which became accepted at many businesses and dolls of norton were sold in toy stores all across the city. His occupation on the census was listed as “emperor” although that census did also label him as insane.

When Brazilian emperor Pedro the second paid a diplomatic visit to san francisco, a group of enthusiastic citizens introduced the two and they had a nice chat, emperor to emperor. When Norton’t blue uniform wore out from continued use, the city council unanimously voted to but him another. In return he gave them all titles of nobility.

Norton was a legend around the city and he was allegedly able to stop an anti-chinese race riot, simply by standing in the way of the mob and ordering them to disperse then repeatedly reciting a prayer at them. Though I cannot say if they left because of his order or simply because that situation sounds supremely awkward. Unfortunately Norton died in 1880 and he was given a proper funeral by the city and laid to rest in the cemetery.

In the words of one of my favorite writers, Christopher Wimmer. “When did we decide that stories weren’t worth telling anymore?” I can’t answer that question with a specific year, but I know for sure that our grandparents know these stories better than we do. At this rate they’ll soon be all but forgotten and that would be a great shame. These stories are certainly less impactful than the effects of Roman democracy on our own, or those other things you see in a high school history class, but nonetheless, I see no reason why they should be forgotten. Humans have been passing down stories from generation to generation since we developed language. And I hope that tradition doesn’t end with us. 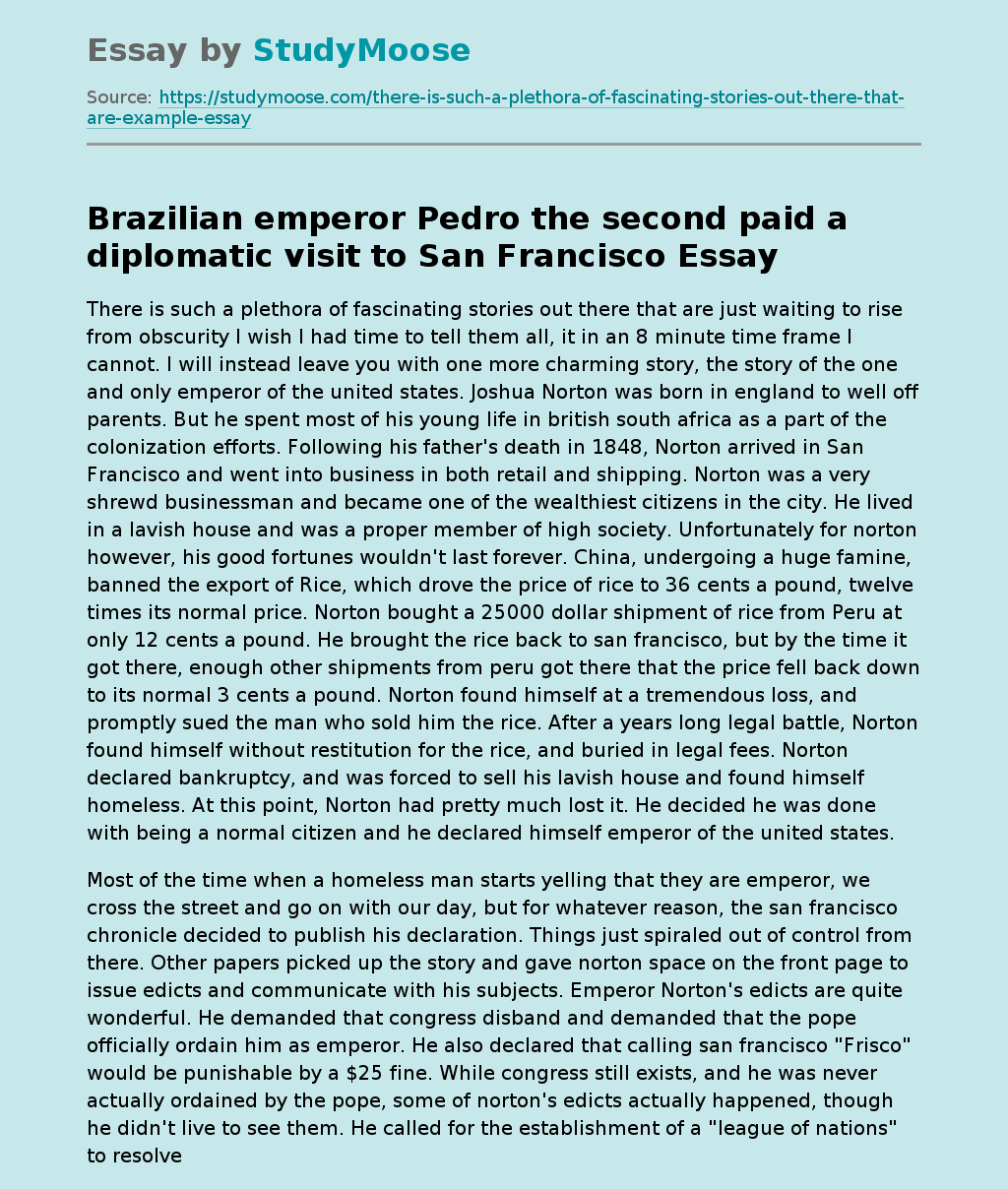