The withered arm, a short story written by Thomas Hardy

The withered arm, a short story written by Thomas Hardy, this story is written in a different way to some of Charles Dickens short story such as ‘trial for murder’, ‘The Signalman’ and ‘Confession found in a prison’ by the story being long and going over a long period of time it is written in chapters, nine to be precise.

This story is character driven, with character development as it shows how Rhoda becomes more jealous throughout the story, it is a retrospective like ‘Trial for murder’, there is a pastoral, a whole county society, Hardy writes detailed descriptions of settings where as Dickens settings are not describes in as much detail.

Don't use plagiarized sources. Get your custom essay on
“ The withered arm, a short story written by Thomas Hardy ”
Get custom paper
NEW! smart matching with writer

H. Lawrence criticizes Hardy’s characters saying: “Hardys characters do not do they endure” He said this quote to criticise Thomas Hardy because D. H.

Lawrence does not write like Hardy. In this story it starts in a dairy on farmer Lodges land, with the milkers talking about him and his new wife, this is a story within a story,”He do bring home his bride tomorrow, I hear, they’ve come as far as Anglebury to-day”. They judge farmer lodge about his age and his marriage “Years younger than he say…

“Thirty or so… ” “More like forty” Rhoda Brook was one of the milkmaids but she did not take part in the conversation because she is judged by society for having a child with farmer lodge outside marriage.

Through jealousy Rhoda tells her son to find out details of Gertrude, Farmer Lodge’s bride and even more so to find out if she is better looking than Rhoda when she was younger.

“If she’s dark or fair, and if she’s tall as I… and shows marks of the lady on her, as I expect she do” Rhoda expects that Gertrude as she is an outsider that she will be more upper class than Rhoda. The next day Rhoda son does what Rhoda wanted, he gets an excuse to walk along the road which Farmer Lodge and his wife are on, he started staring at Gertrude and she was beautiful. Gertrude could not understand why the boy kept looking at her but she was relieved when he stopped. “How that poor lad stared me”.

Rhoda’s son ran home to tell his mother the news, she was eager to hear what he had to say, “Well, did you see her? ” “Yes” “Is she lady like” “Yes: and more a lady complete. ” Rhoda keeps questioning her son about Gertrude, because her son has not seen how tall Gertrude is, so the next day Rhoda’s son goes to the church where Gertrude is. The boy sees Gertrude and when he tells his mother she is pleased with the news because, “She is not tall, she is rather short” With Rhoda asking her son about Gertrude she can now picture an image of what Gertrude looks like in good detail.

Rhoda is so jealous about Gertrude and Farmer Lodge, she dreamed that she saw Gertrude dressed in good clothes but being ugly and old coming to mock Rhoda, “Rhoda Brook dreamed since her assertion that she really saw” Rhoda seeing this incubus of Gertrude shows a sign of mental illness an that she feels rejected from Farmer Lodge. The incubus whom Rhoda sees is in the room trying to suffocate her, as Gertrude is a kind person she visits Rhoda at her home. Rhoda’s vision of Gertrude is as how she looks but her character and manner she did not dream so that takes her by surprise.

Gertrude keeps going to Rhoda’s house and they become friends, sharing thoughts and feelings. This is character development but this develops more as Rhoda finds out about Gertrude’s arm she feels bad guilt, and Rhoda was surprised that Gertrude was the incubus that she saw in her dream, “She had named the night and the hour of Rhoda’s special encounter and Brook Felt like a guilty thing” Now Rhoda feels that she has put a curse on Gertrude when she felt hatred for her but now as she s her friend she feels guilty,

“O, can it be, she said to herself, when her visitor had departed, ‘that I exercise a malignant power over people against my own will” When Gertrude’s arm becomes shrivelled Rhoda feels even more guilt, but Gertrude isn’t as bothered about her injury as Farmer Lodge, Gertrude feels now that she has a disfigurement he doesn’t care for her as much. Gertrude tries to hide her injury from Farmer Lodge but he still knows about it. “Yes: and he was very proud of mine, at first” “Keep your arm covered from his site” “Ah- he knows the disfigurement is there”.

When Gertrude and Rhoda meet, Gertrude tells Rhoda that some of the local people have said to find a cure from an old conjurer, an exorcist, this is a supernatural that the local people feel it may be a supernatural cause, Rhoda feels even more guilt because she feels that she did it. To get to the conjurer she will have to cross Egdon Heath, Egdon Heath is used as a motif of old traditions and old beliefs. “Is it by going to some clever man Over Egdon Heath” “Well- they say- they used to say he was a- He had powers other folks have not”.

Rhoda and Gertrude go secretly to where the exorcist lives, they meet at the edge of Egdon Heath, again the motif is used, “To escape suspicion of their mystic intent, They should meet at the edge of heath at The corner of the plantation” Eventually when Gertrude and Rhoda get to Conjurer Trendles cottage, “He did not profess his remedial practice openly, Or care anything about their continuance” This quote means that he is a fake that he can’t cure Gertrude’s arm.

As Rhoda feels guilty enough about Gertrude’s arm then the conjurer says,”Medicine can’t cure it,” “Tis the work of an enemy” The conjurer is saying that this is a supernatural cause when Rhoda herd this she was paranoid about it. The village people were talking about Rhoda and Gertrude and now that everyone in the town believes that Rhoda bewitched Gertrude. “The subject was no more alluded to during The long and dreary walk home… That Mrs Lodges gradual loos of the use of the Left arm was owing to being ‘overlooked’ By Rhoda Brook” Not before long Rhoda and her son suddenly leave the village.

Six years later Gertrude’s arm is still the same and Farmer Lodge is losing interest in her, Gertrude goes into a state of depression, showing even more psychological depth in characters, Gertrude goes back again to conjurer Trendles the ‘fake’, he explains that he cannot cure her arm, but for her to be cured, is that she needs to touch a corpse of a body which has just been hanged, no supernatural cure is needed, just a rational one. “It will turn your blood: where seen to be capable of a scientific no less than a ghostly interpretation” For Gertrude to go to the hanging she needs to cross ‘Egdon Heath’ again Hardy uses this motif.

People think that she is at the hanging to watch but she is there for another reason, the executioner lets her touch the corpse, he tells her about the hanging, an 18 year old being hanged for arson, Gertrude touches the corpse the next day, she is cured. With the shock of seeing Rhoda and Farmer Lodge standing together Gertrude dies of shock, the 18 year old arsonist was indeed their son, Farmer Lodge lived a lonely life he moves to the coast and dies two years later. Rhoda is the only survivor, maybe because Hardy feels that Rhoda should survive but to be left to feel guilty for the deaths of the others. 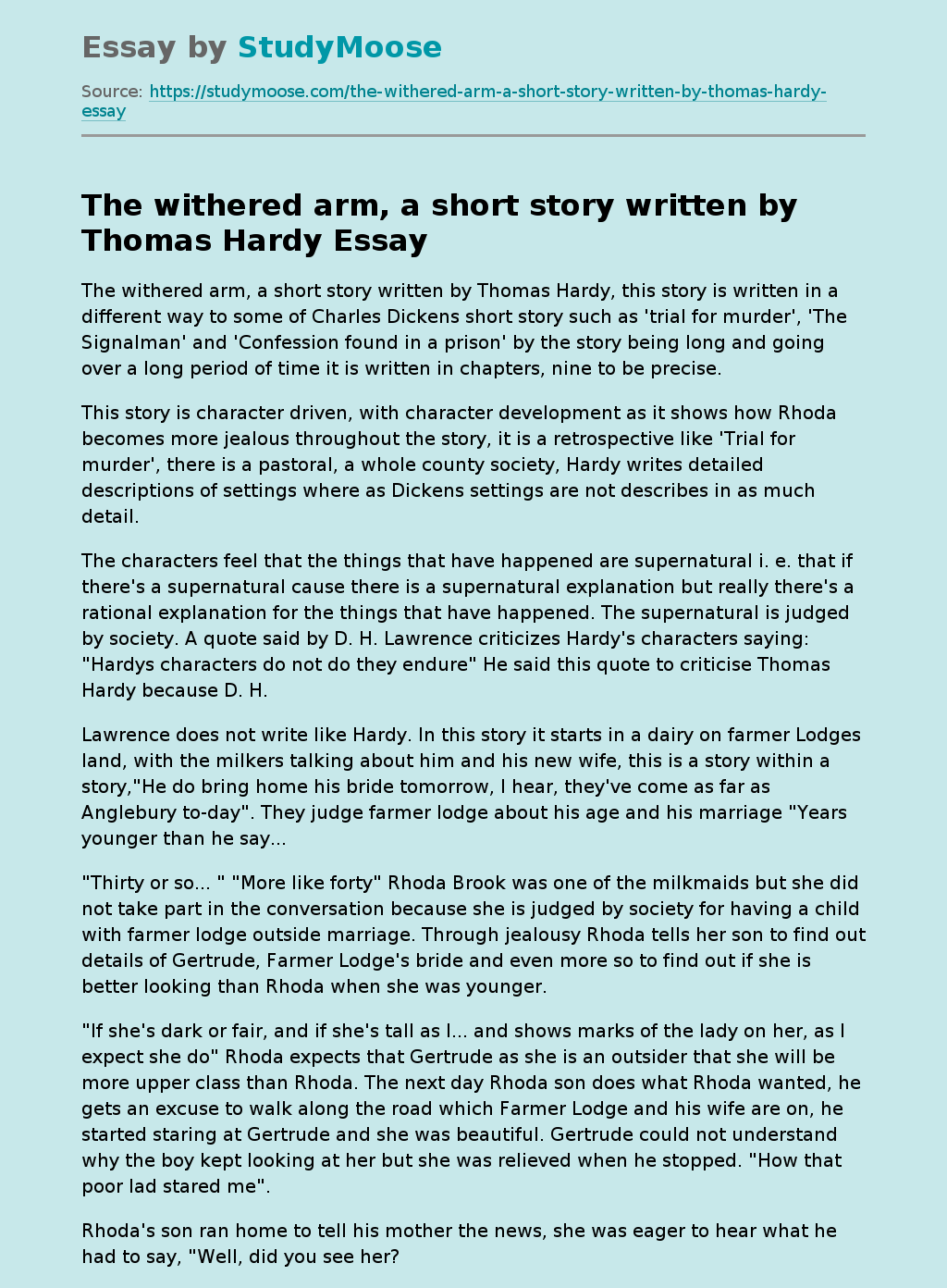