On the Departure Platform By Thomas Hardy

This is obviously a metaphor for the ending of a “moment”, as well as the literal description of the place where many of the images (within the poem) are based; on a train platform, where the persona and his female love interest part. The title introduces the poem’s key theme to the reader – a separation of young love, but not a permanent one. As one reads further into the poem itself, the persona comments on the painful fact that humanity leaves behind time as well.

Hardy writes in 6 stanzas of English quatrains with an alternate rhyme scheme (a similar technique used in other poems) to concentrate the poem. The last line of these stanzas is conspicuously shorter than the others – usually four or five syllables to the other nine or ten. Hardy does this to a) draw attention to them but also b) to the theme they nearly all have in common.

They all illustrate, in the first four stanzas, a diminuation in the woman’s size; as an optical effect, she gets smaller the further she moves away into the crowd. This, in some ways, adds to the poignancy of the poem.

Time (the way that it works), Distance, Pain

Hardy’s poem is full of visual ideas – they are continuous to provide an important effect to be later considered. Thus his opening line is of an image; “We kissed at the barrier; and passing through/ She left me.

” Hardy intentionally uses a stark and blunt image – the enjambment highlights the phrases “passing through” (immediately presenting images of movement, perhaps through Time as well) and “She left me”. One can feel the emotion in that conspicuously short phrase.

“And moment by moment got/ Smaller and smaller.” Continuing with the diminuation of the woman’s figure, Hardy uses mirroring comparatives to emphasize the change. The stanza then ends with the shortened line; ‘She was but a spot;’. Notice the empty sounds in ‘spot’, but the harsh consonance – it invokes a decisively negative emotion. Also note the semicolon at the end of the line. The sense of the sentence continues into the next stanza; viewing the poem as a whole is crucially important.

Again, Hardy presents an image; ‘A wee white spot of muslin fluff’ – the use of the word fluff (as in a fluffy cloud) is complimented by the use of ‘nebulous white’ later on. Hardy imagines the woman as a cloud; an indistinct mass of hazy material. This is important metaphorically. We receive no description of the woman’s face, only her clothing. She has no name, no identity; this memory of a by-gone moment whilst in love (as revealed later) bears none of the crucial intimacy that one would expect such a relationship to possess. You would expect a lover to be able to remember at least facial features! This lack of distinction is to be later explored.

Note; ‘through hustling crowds of gentle and rough’ refers to the class system of ‘gentlefolk’ and the ‘rough’ of the lower classes. Its only importance is in distinguishing between the figure of the woman and the crowd – the persona is only focussed on her!

Hardy then explores the same image further, with a focus on colour contrast:

“Under the lamplight’s fitful glowers,

Behind dark groups from far and near,

Whose interests were apart from ours,

Hardy compares the darkness of the scene – which is, remember, in a typically smoky Victorian railway station – to the pure white of the woman’s dress. It stands out. Indeed, he focuses entirely upon this image, as it is the beauty of it which he wishes to recall; therefore, all other individuals become ‘dark’ metaphoric areas in his memory. The line “Their interests were apart from ours” further advances this – the persona does not care about any other intentions other than his own, and perhaps his partner’s.

It could be argued that Hardy creates an intimidating scene around the woman. ‘Glowers’ are angry expressions. The fact that they are considered ‘fitful’ – or appropriate – for the occasion reveals an odd nuance in the persona’s attitude. If it is appropriate, then is the persona angry too? Why would he be? Upset, understandably, but is he frustrated at losing his love?

Or is he angry at slowly losing the moment (in terms of memory) itself?

On a final note, observe how there is a comma at the end of the stanza. This allows the sense of Hardy’s verse to ‘roll on’, like an exaggerated form of enjambment.

Hardy does this to invite comparison between the segmented lines:

He emphasizes the apparent suddenness of the woman’s appearances, whilst also increasing a sense of distance between the figure and the persona. Note how she ‘flickers’ – is this flickering due to a slow loss of clear recollection of memory? This is a nice idea! The figure of the woman herself changes in the following lines, either in memoriam or literally (“that flexible form, that nebulous white,”). Despite occupying the persona’s entire mental capacity, the image lacks any definition in terms of facial or emotional features. This is highly inconsistent with the idea that the persona cherishes her! (As, indeed, he confirms; “she who was more than my life to me”.) Why compare an individual whom one should know so well to a cloud?

In any case, it is at this point that the figure disappears entirely, with a noticeable ellipse. Here Hardy comes out of his historic mood and into a (near) present tense.

Fifth and Sixth Stanzas Notes: Hardy once again comes to the point of his poem at the end, in a comment upon the inability to retain a moment, and the irony of suspending such a moment in literary form.

Although the persona views the memory fondly, and has penned “penned new plans since”, there is a decided lack of evidence for any future physical recurrences of the woman. It is perhaps suggested, therefore, that the relationship has ended at this point – in terms of language, the persona has yet to see her again and maybe never will. Indeed, Hardy uses polysyndeton and recurring dashes, along with the conditional tense to emphasize the uncertainty as to the relationship’s future.

Hardy’s point does not regard the relationship, however – therefore the truth is left purposely unclear. By contrast, the aim of the poem is to point to the fact that “nought happens twice thus” – the persona will never experience such a moment again.

This idea is introduced in the last line of the fifth stanza (“But never as then!”), in a phrase made noticeable through its contracted nature. Then Hardy switches to a present tense exchange.

“-And why, young man, must eternally fly

A joy you’ll repeat if you love her well?

Whilst also emphasizing the persona’s youth, Hardy makes his tragic point clear once again. However, there exists an irony rooted in his words. For, due to the existence of the poem itself, it can be argued that the moment is quite attainable (as proved above!), but through the use of literary suspension.

On the Departure Platform By Thomas Hardy. (2017, Oct 15). Retrieved from https://studymoose.com/extended-commentary-of-on-the-departure-platform-by-thomas-hardy-essay 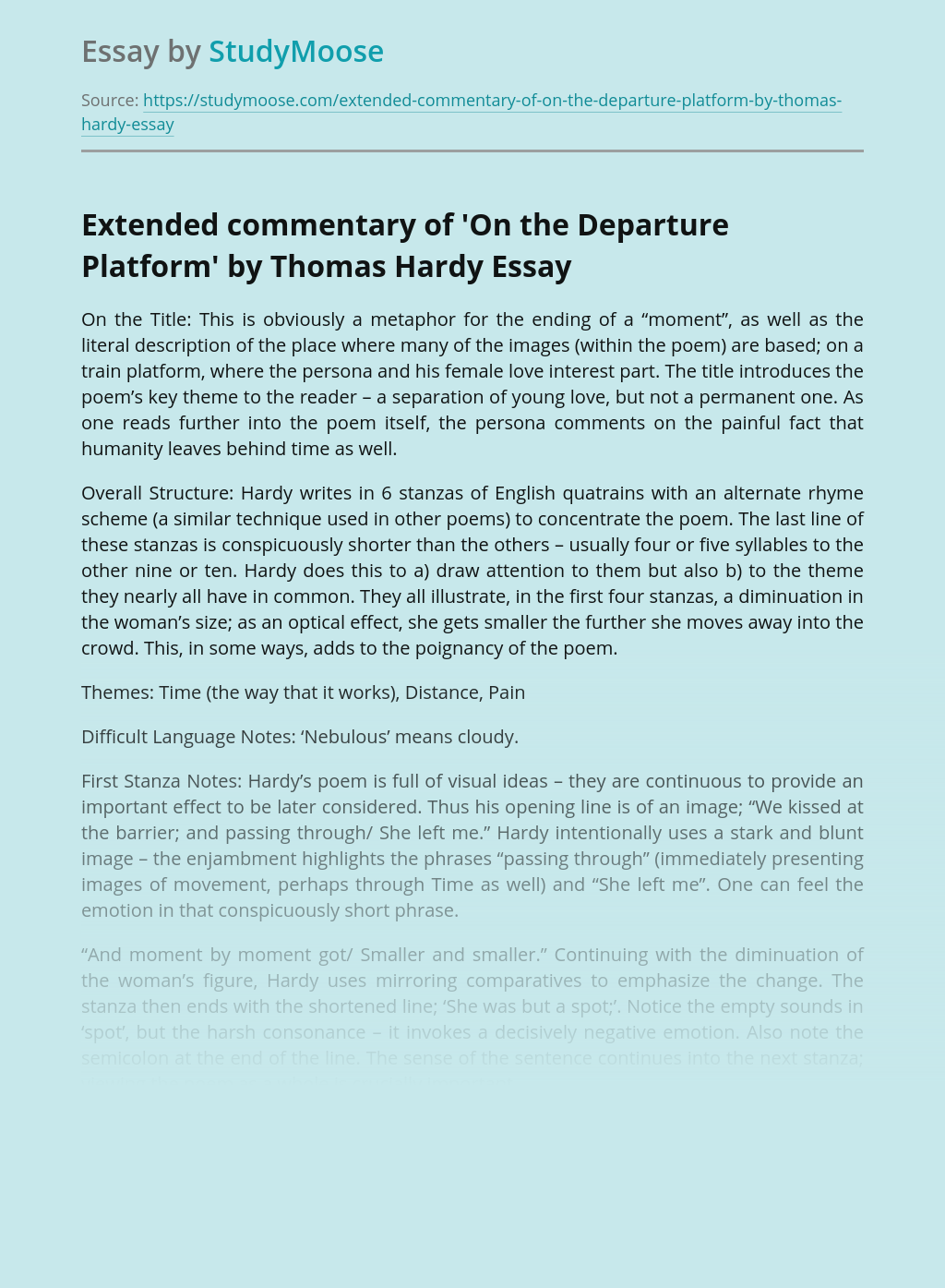 If You Forget Me By Pablo Neruda

Rate this post This poem dramatizes the conflict between the poet’s passionate burning desire and unconditional love for a woman, and his stern attitude toward her if she doesn’t feel the same. By demonstrating excellent personification, imagery, and sentimentality, this poet portrays love, compassion, and optimism. Although the poet expresses deep emotion for his love,...

Rate this post Much as it is a poem of vivid images equated into sensations of melancholia and uber sentimentality, Dover Beach has been touted as one of Matthew Arnold’s most appreciated poems. It was most likely composed in the summer season of 1851 and subsequently modified for the volume of New Poems in 1867...

The Importance of Determination

Rate this post Everyday people face challenges, but it is important that one does not give up, and to keep trying until they successfully overcome the obstacles that stand in their way. “Mother to Son” by Langston Hughes and “Still I Rise” by Maya Angelou are two different works written by two different authors yet...

To His Coy Mistress by Andrew Marvell

Rate this post “To his coy Mistress” is poem written by Andrew Marvell, and this is one of his best poems ever. Author used Carpe Diem, very interesting style of writing poetry. In this poem he describes his life and how he wanted a more time with special woman. “To his importunate Mistress” is poem...

Rate this post Compare and contrast the two versions of “Nurse’s Song”, showing how Blake illustrates the concepts of Innocence and Experience The Blakean concept of “Innocence” is focused on purity, vulnerability, trust and harmony – often illuminated through the use of children. For “Experience” the crux is on remorse, regrets and the general loss...

Rate this post This poem is by Ernest Dowson (1867-1900). Merely discussing him is a sad matter, because Dowson was both a student at Oxford for a time and a severe alcoholic whose life ended far too early. We can extend the parallel further in he was a Roman Catholic by conversion. We should not...