In the two-point threshold experiment it is obtained how close two distinct sharp point can be together for a person to feel two points instead of one. The value of the two-point threshold is the minimal distance at which the subject can feel two distinct points. The principle behind this experiment is the fact that mechanoreceptors are not distributed homogeneously in the skin of the human body. There are areas with a higher density and areas with a lower density of mechanoreceptors, making this certain area more or less sensitive.

Don't use plagiarized sources.
Get Your Custom Essay on ﻿The Two-Point Threshold Just from $13,9/Page

However, the smaller the distance is where the subject can feel two distinct points, the more mechanoreceptors must be present in this area, enabling a person to feel small details in that part of the body. In this experiment we will test the two-point threshold at five ares of the body: the back of the hand, the palm of the hand, fingertip, the back of the neck, and the calf of the leg.

With these given areas, the fingertips will have a smaller two-point threshold than the back of the hand.

The Two-Point Threshold Values For All Subjects
Calculations/ T-Test

First the average two-point threshold is calculated for both areas by summing up all values and dividing the sum by the number of values,7. For the back of the hand it is an average of 22.4mm, and for the fingertips 4.71mm. Then the difference of each value to the average value is calculated and inserted in to the formula to calculate the standard deviation, where n is the number of subjects/values.

The squares for both independent variables will now be summed up and divided by n-1= 6 before the square root is taken.

Back of the hand:

To calculate the T-value the difference of the average values is subtracted by the square root of the sum of the two SD square divided by the number of subjects, 7.

The calculated T-value for this experiment is 9,46.

A source of error is certainly the number of subjects in the experiment. For a strongly supported hypothesis I would suggest a follow up experiment with many more subjects to make sure this hypothesis is still supported because only a few too high or low numbers can certainly change the results with only seven subjects. Also I would suggest to have only one tester in the follow up experiment because in this experiment there were seven testers, one for each subject and everybody measures slightly different. So instead of having human error involved from one tester, we have errors involved from seven. The last source of error is within the calculations. Rounding errors here and there can make a difference if the results are close together. 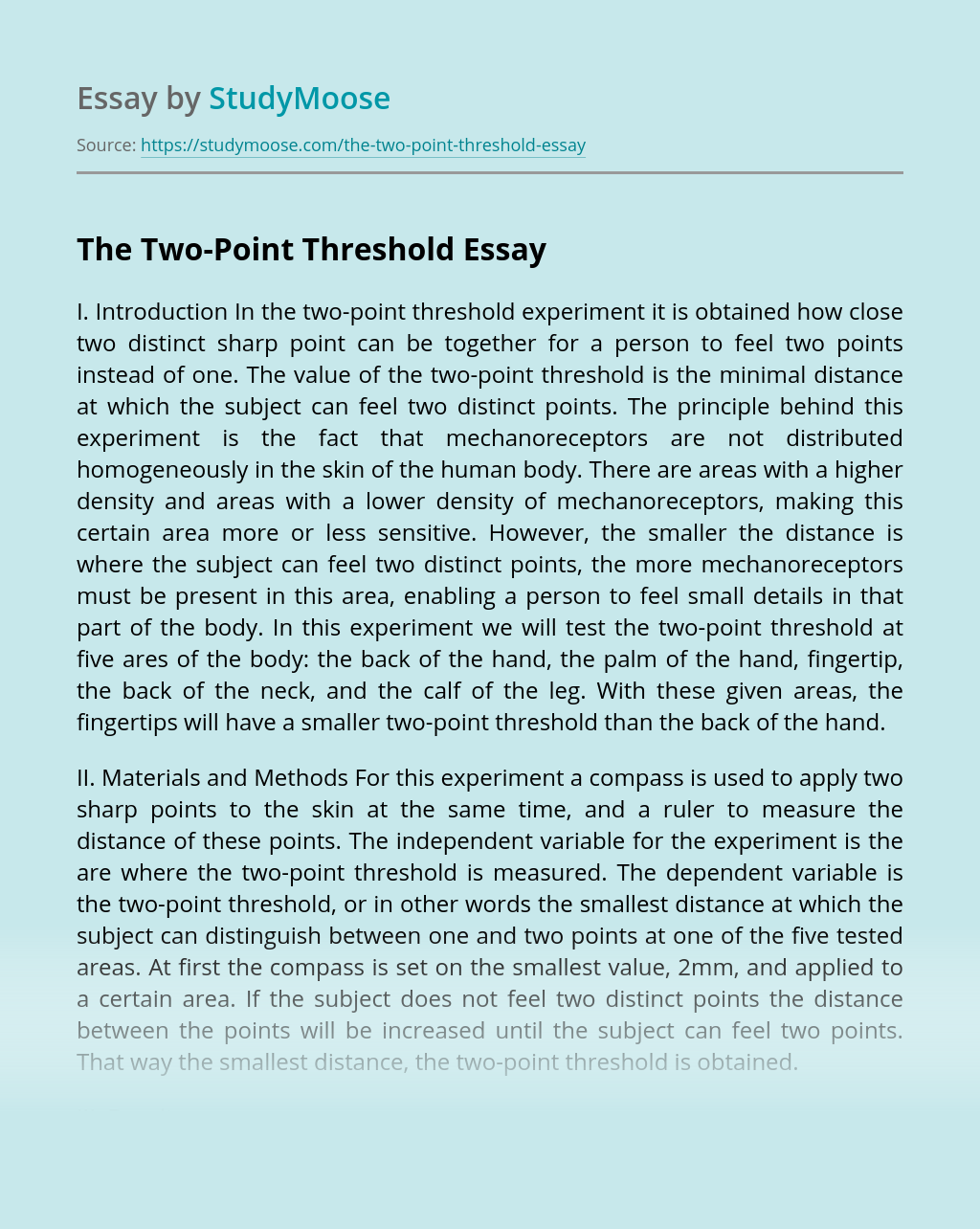 Question 2: A range of authors (e.g. Gerard and Ellinor 2001; Isaacs 1993, 1999; Schein 1993; Senge 1995) suggest that dialogue can positively transform organizational cultures. Do you agree with this assessment? Why? Why not? Engage with relevant academic literature in developing your argument. Student Name: Nguyen Vu Hoang Dung Student Number: 11477445 In organization...

An Undergraduate Thesis Presented to the Faculty of the College of Arts and Sciences University of Southeastern Philippines Bo. Obrero, Davao City In Partial Fulfilment of the Requirments for the Degree Of Bachelor of Arts in Literature Cheah Kaye Rosales Charisma J. Tabingo October 2013 ABSTRACT ROSALES, CHEAH KAYE and TABINGO, CHARISMA J., University of...

Get Essay
High School and Handball

There should always be something special to you that will warm your heart when you think of it. As I sit at home everyday, I think of this special thing that will brighten my day and get me off my seat. Ever since I can remember, handball was one of the few things I never...

Journal Entry 1 a.) Even from the opening chapter, the book is appalling. This “perfect” society that the leaders in Brave New World have created is free of rebellions and dissonance, but at the same time people have been stripped of their individuality and freedoms. Instead of being born into a family, babies are manufactured...

1. What appeared to be New Century’s strategic objectives? Describe and evaluate the business model the company had adopted to achieve these objectives. New Century Financial Corporation was founded in 1995 went public in 1996 and was also listed on NASDAQ. New Century’s primary goal was to originate and sell subprime mortgages. The main activities...