The Stanford Prison Experiment was a social psychology experiment that tried to undertake and investigate the psychological effects of perceived power that occured between the prison officers and the prisoners. This experiment was based in the basement under the psychology department at stanford university, this was due to its proximity to the psychology department and because the basement had a prison like environment. Before the experiment had started in 1971, Professor Philip Zimbardo had sent out notices through Stanford University to recruit male participants, a total of 24 where chosen and agreed to stay for a 7-14 day period and would also receive $15 per day (.

Don't use plagiarized sources. Get your custom essay on
“ The Stanford Prison Experiment was a social psychology experiment that tried to ”
Get custom paper
NEW! smart matching with writer

65 as of 2019 inflation).The Basement where the experiment was to be conducted in a 10.5 metre section of the basement, this section was renovated to fit the experiments needs, these needs’ consisted of two assembled walls; one was at the entrance and one was also assembled at the cell wall to block observation. The measurements of each cell was 1.

Of the selected 24 participants 18 were assigned to be Officers and Prisoners with 6 possible substitutes as a backup role in case something happened. The day before the experiment the researchers held an orientation day for the Officers to familiarise the environment, during the orientation the researchers advised the Officers not to physically harm the prisoners, or to confiscate food and drinks. The Officers were also given wooden batons to establish their status over the Prisoners, they were also fitted with a uniform that was similar to an actual Prison Officer, Khaki pants & shirts with mirrored glasses to avoid eye contact with the Prisoners. Zimbardo allowed the Officers the simulate a feeling of boredom onto the Prisoners along with a sense of fear to a certain degree, the prisoners also had absolutely no privacy and were robbed of their sense of individuality. This all lead to a sense of no power which was vital to the experiment. due to the fact that it was designed to strip the Prisoners of their privacy and individuality and induce a feeling of disorientation and depersonalization. On the first day of the experiment the Prisoners were all arrested in their homes and were also charged with armed robbery by the Palo Alto Police Department, which is illegal although the arrests were simulated. After the arrests the New Prisoners were taken to the fake prison under stanford university, to then get fingerprinted and strip searched and were also given mugshots along with their new identities. The prisoners were then sent to their cells, each cell was designed to hold up to 3 prisoners each accompanied with a corridor that’s used as a cell yard and a closet that is used as solitary confinement. On the first day, nothing happened, this was most likely due to the fact that Prisoners would have been just settling in. However. On the second day the Prisoners of cell 1 had already embarked on causing trouble by barricading up their cell door with their beds and then refused to follow the guards instructions by refusing to leave. This event resulted in some guards from other shifts to volunteer and help with stopping this issue, this also caused the guards to attack the prisoners with fire extinguishers due to the lack of supervision by the research staff. After the revolt the guards had setup a Privilege Cell’ for the prisoners that were not in the revolt to be rewarded for their obedience. The rewards consisted of, higher quality meals throughout the day, but they chose not to eat the meals in protest to the violence that to guards inflicted onto the other prisoners. Only 35 hours had passed when #8612 started to abruptly act crazy’ as Zimbardo had described; he screamed in a fit of rage totally out of control. Zimbardo said It took quite a while before we became convinced that he was really suffering and that we had to release him. Afterwards the Guards forced the prisoners to repeat their identification numbers to try and enforce their new assigned identity on to them. Over time the guards slowly became more and more immoral and violent towards the pretend prisoners by purposely sabotaging the prisoners sanitary conditions by forcing them to defecate and urinate everywhere but in a bucket that had been placed in their cell, they also forced some prisoners to remove all of their clothes and wait there naked, then they proceeded to make fun of their physique and other details about their naked bodies. they also started to remove the prisoners mattresses, therefore forcing them to sleep on the urine covered concrete possibly naked too. The researches had recorded three of the Guards as being genuinely sadistic, due to their pleasure in abusing and causing of suffering on the prisoners. This was one of the reasons why the experiment was halted after only 6 days. The main reason why the experiment was halted so quickly was due to Zimbardo’s girlfriend pointing out the immorality of the experiment upon review and inspection.

The Stanford Prison Experiment was a social psychology experiment that tried to. (2019, Aug 20). Retrieved from https://studymoose.com/the-stanford-prison-experiment-was-a-social-psychology-experiment-that-tried-to-essay 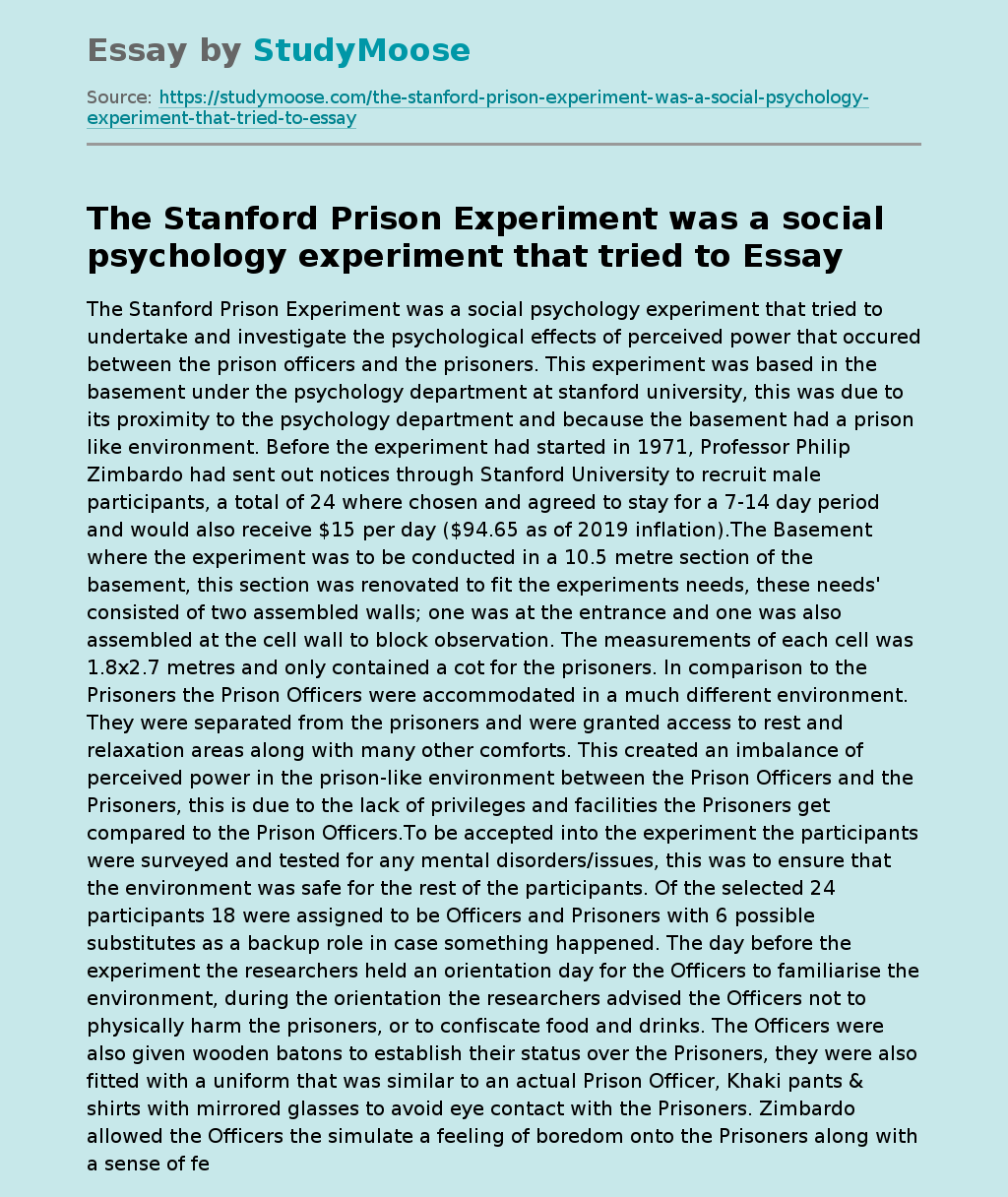