The Rhetoric Strategies in Homeplace, an Essay by Scott Russell Sanders

Do you want a remarkable lifetime by moving to different places? We usually choose to travel because it is interesting and exciting. One essay from Scott Russell Sanders called “Homeplace”; talks about why having a home is important. He introduced Miller’s story in the beginning to catch reader’s attention, then he explains the reasons why Miller’s family did not fleet to a better place. Home, is where family gathers. Sander is an Environmentalist, and he believes that nature is in relation to the settlement of the people.

Don't use plagiarized sources. Get your custom essay on
“ The Rhetoric Strategies in Homeplace, an Essay by Scott Russell Sanders ”
Get custom paper
NEW! smart matching with writer

The other essay from Richard Ford “I Must Be Going” talks about why is it so important to travel and experience. In his essay, he shares his experience on moving from state to state. Sanders develops an effective essay than Ford because of his use of pathos in the beginning of the essay, which carries on an emotional appeal to the readers. Moreover, he uses other famous people’s quotes to prove his claim that we should have a base connection to our land, which increases his ethos because this increases the credibility of his essay.

The structure of Sander’s essay is more effective because of the story. It is easier to catch reader’s attention by using a descriptive drama than sharing a personal story.

In Ford’s essay, he uses pathos when he mentioned that he travels from “St. Louis to New York, New York to California, California to Chicago, Chicago to Michigan, Michigan to New Jersey, New Jersey to Vermont…” (109).

This gives readers a visual of his moving routes and also shows Ford loves traveling. Moreover, he talks about moving with his wife. “When we’d eaten our dinner in a little, home-cook place at the edge of town not far from the interstate, we walked out into the breezy, warm air and stood and watched the sun go down beyond the ocean of cornfields and the shining Platte River” (110). This quote gives a descriptive detail of him having a good time with his wife, which increases the pathos in his essay. This will help reader visualize the image behind his story of the conversation with him and his wife is somewhat humorous. “Home?’ I said. “How far is that from here?’ ‘Oh, you know,’ she said and shook her head and laughed at the absurdity of that idea. ‘Just back to the motel. Where else?’” (110). This conversation tells us that his wife understood that her husband love the concept of moving around. Therefore, she follows his footsteps because she enjoy spending time around with him. Ford’s essay gives a good description of the experience in his journey, but in Sander’s essay, he started with Miller’s story, “Several Years later, a second tornado peeled off the roof, splintered the garage, and rustled two cows” (101). This quote clearly helps reader visualize the image, which increases the pathos of his essay by the use of descriptive word like “splintered” to describe the situation of Miller’s story. This highlights the destruction process of the tornadoes, and takes the reader deep into the madness of the story. Both Sander and Ford gave reader a good understanding of the situation, but Sander’s story is more effective because readers are different quotes that increase their level of credibility.

In addition, Ford used Emerson’s quote as a support of his claim. “We live amid surfaces, and the true art of life is to skate well on them” (110). This quote helps him prove that we should be moving on because the meaning of life is never good if one does not experience life. Meanwhile, it increases his ethos and brings along his point on why we should be moving in order to fulfill our destiny. In Sander’s Essay, he quoted Novelist Salman Rushdie, Poet Gary Snyder, and Zen Master Thich Nhat Hanh. Sander started by mentioning, “Novelist Salman Rushdie chose to leave his native India for English, where he has written a series of brilliant books from the perspective of a cultural immigrant” (102). Then he goes on and say, “he celebrates the migrant sensibility: ‘the effect of mass migrations has been the creation of radically new types of human being: people who root themselves in ideas rather than places, in memories as much as in material things” (102). There are people who will travel around because the old memories are set in their mind. While some people will not leave their town because it is where they belong, the place where they familiar with the most. Then he quoted Gary Snyder “The poet Gary Snyder writes frequently about our need to “inhabit” a place. One of the key problems in American society now, he points out, is people’s lack of commitment to any given place” (102). Gary Snyder helps to prove his point with one of the American issue. One can travel around the world, but they can never understand the people or the culture fully. Moreover, “words of the Zenmaster Thich Nhich Hanh: “This spot where you sit is your own spot. It is on this very spot and in this very moment that you can become enlightened. You don’t have to sit beneath a special tree in distant land” (103). A meaningful life is not necessary be traveling around the world and taking millions of pictures of places you been, but you can stay at a same city and be able to relate to a certain place more than anyone else is. Richard Ford used facts and experiences to make his essay more attracted to readers. “Twenty times, probably, in twenty years (I’m sure I’ve forgotten a move or two). And always for excellent reasons” (109). Ford moves a lot in his lifetime, and it is interesting for people who love going on a vacation or simply traveling. “It’s what a rock star feels, or a chewing-gum heiress, celebs who keep houses all over the globe, visit them often, but never fully live in any: a sense that life’s short and profuse and mustn’t be missed” (109). This is the logic behind Richard Ford; he wanted to live a life that is good without wasting his time. Even though Ford owns many houses, but he never really stay at one of them for long term memories. “Homereal home—the important place that holds you, always meant that: affection, love” (110). Ford had love, but he does not necessary have affections, which means he do not have a real home. In Sander’s essay, he talks about why Miller’s family would not want to leave this home, “They had relatives nearby, helpful neighbor, jobs and stores and schools within a short drive, and those were all good reasons to stay” (101). Then, he goes on and say, “Out back of the house were groves of walnuts, hickories, and oaks, all started by hand from acorns and nuts” (101). These resources are important to the Miller’s family. They spent time in their farm because they had easy access to resources. The quote increases the logos of the essay because one does not give up something they had accomplished for so long.

In Ford’s point of view, Life is too short, therefore, we have to travel and experience life to the fullest. He used his experience of the trips he made and put them into an essay, but Sander have a stronger structure and convincing essay based on the Rhetorical triangle. Sander’s essay have a touching story at the beginning where Miller’s family lost their resources and farm, but they never gave up. This increased his pathos in his essay Sander emphasizes his point that “people who root themselves in ideas” (102). He also did quoted three different famous people, which increase his ethos. Therefore, Sander’s essay is more effective comparing to Ford.

The Rhetoric Strategies in Homeplace, an Essay by Scott Russell Sanders. (2021, Sep 16). Retrieved from https://studymoose.com/the-rhetoric-strategies-in-homeplace-an-essay-by-scott-russell-sanders-essay 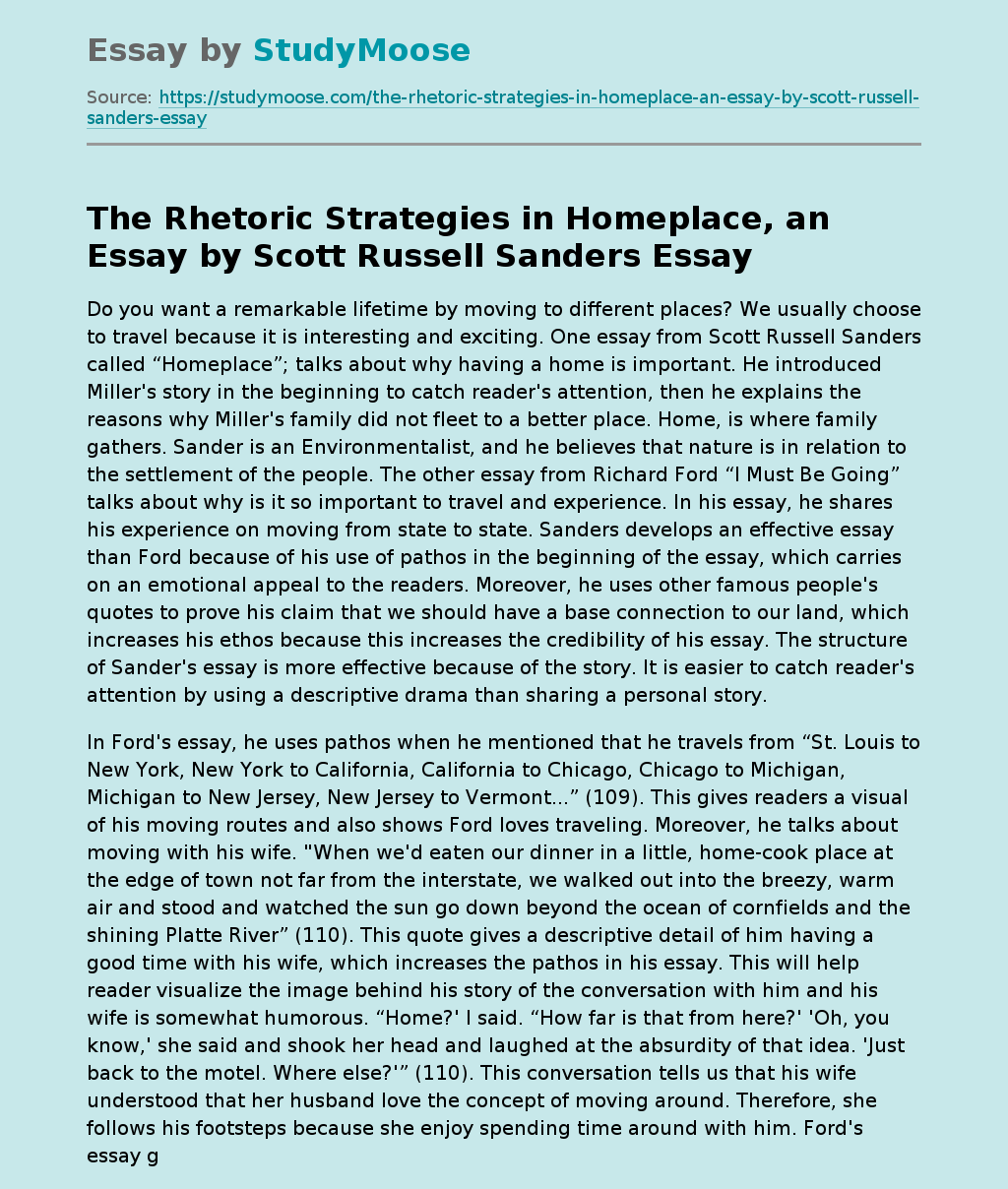