The Problem With Garbage

The problem with garbage is that it’s a sum zero game. Garbage has to go somewhere but nobody wants it in their backyard. It’s as if trash is deposited in the garbage can and somehow it’s supposed to disappear into some magic black hole. Problem is, there is no black hole. There isn’t even room for any more landfill. What was once thought to be a progressive solution – incinerating garbage – has become a major point of contention.

Don't use plagiarized sources. Get your custom essay on
“ The Problem With Garbage ”
Get custom paper
NEW! smart matching with writer

Incineration of things such as plastics and medical waste raise serious doubts with regard to sound health practices. The solution everybody can agree on – recycling – is not a panacea for all garbage problems. Only so much trash is recyclable. It remains a problem with no easy or cheap solution. Indeed, there is a strong need for a quick solution to the country’s garbage problem.

Community dwellings such as schools, hospitals, apartments and hotels are generators of waste in a large quantity.

In a day, they generate an average of 50-100 kg of waste every day and which is not properly disposed off. The dumping of garbage as well as non biodegradable waste poses a serious threat to the environment. If waste is efficiently managed in public areas like these, the garbage problem that is faced in Indiaâ€™s major cities can be reduced to a greater extent.

School is one such public place where lot of biodegradable waste is generated and which can be disposed off effectively by proper enforcement alone.

Moreover, schools can be made as the primary target in the drive for a garbage-free city.

Installation of biogas plant in such places not only solves the problem of waste disposal but also can result in economic benefits. Biogas can be used for cooking as well as generating electricity. Though the idea of constructing biogas plants is being implemented in some places, a widespread popularity has not been seen. It may be because of the high one time cost. But the most interesting feature of biogas is that there is only a one time capital cost and after that there is no incurring or recurring cost involved and the maintenance cost is minimal. So it means that once you install a biogas in your compound, you remain hassle-free for the rest 15-20 years. Moreover, the government is providing subsidy as well as loans for the construction of biogas plants in households as well as in institutions.

A pilot study was done by researchers in Centre for Public Policy Research with schools in around the city of Kochi to evaluate whether installing biogas plants in their premises could be looked at as a possible solution to disposing garbage off in a manner which is least harmful to the environment. Schools were taken as the subject of the study mainly because of two reasons:

Schools in Kochi already face disposal of waste as a major problem and schools are in search for a better alternative for effective garbage disposal.

Unavailability of free land for disposal of waste is another problem. Renting out private land is expensive in cities and schools have enough space for installation of biogas plants.

There are two options for installation of a biogas plant can be set up in schools:

Biogas Plant for exclusive use in schools

Installation of biogas plant in the school by feeding the waste from school alone is feasible only if the school is generating adequate waste to be fed into the digestor and if there are enough funds generated for the cost of installation. If a model is build with 3 cu: m capacity, the cost of constructing the biogas plant would be around Rs. 15000 with an additional cost of Rs. 300 for the person who operates it.

Community Biogas Plant
Another solution is to install a biogas plant in the school campus where the waste is collected from local households and hotels in and around the school along with the garbage generated in school and thus the community around a school would benefit from the installation.

Private biogas suppliers can be approached for installing the plant. There is a central subsidy from NBMMP (National Biogas and Manure Management Programme) of Rs.2100 which would lessen the cost of construction.

For operating the plant the cost is really minimal except for hiring a person to operate.

The gas can be connected to the school kitchen and can be given to them at a price say, Rs.15 per litre which would be half the price of 1 litre of LPG. In that way, school gets unlimited supply of cooking gas and also reduces its expenditure on firewood as well as LPG.

The residue produced after the methanation process is good manure. The residue of slurry needs to be removed once in a month. This can be sold in the market at a wholesale price of Rs. 5 per litre to a nursery or farmers of the community.

The return over the investment can be realised within 18 months of installment of the plant.

There is no incurring and recurring cost with such a plant. As for the maintenance and operational cost, it is really very low and can be easily covered.

The lifetime of a typical bio-gas plant is around 15-20 years.

There are different ways to solve the problem of garbage and it is only prudent that some of them are tried out to evaluate their feasibility sooner than later.

The Problem With Garbage. (2016, Jun 01). Retrieved from https://studymoose.com/the-problem-with-garbage-essay 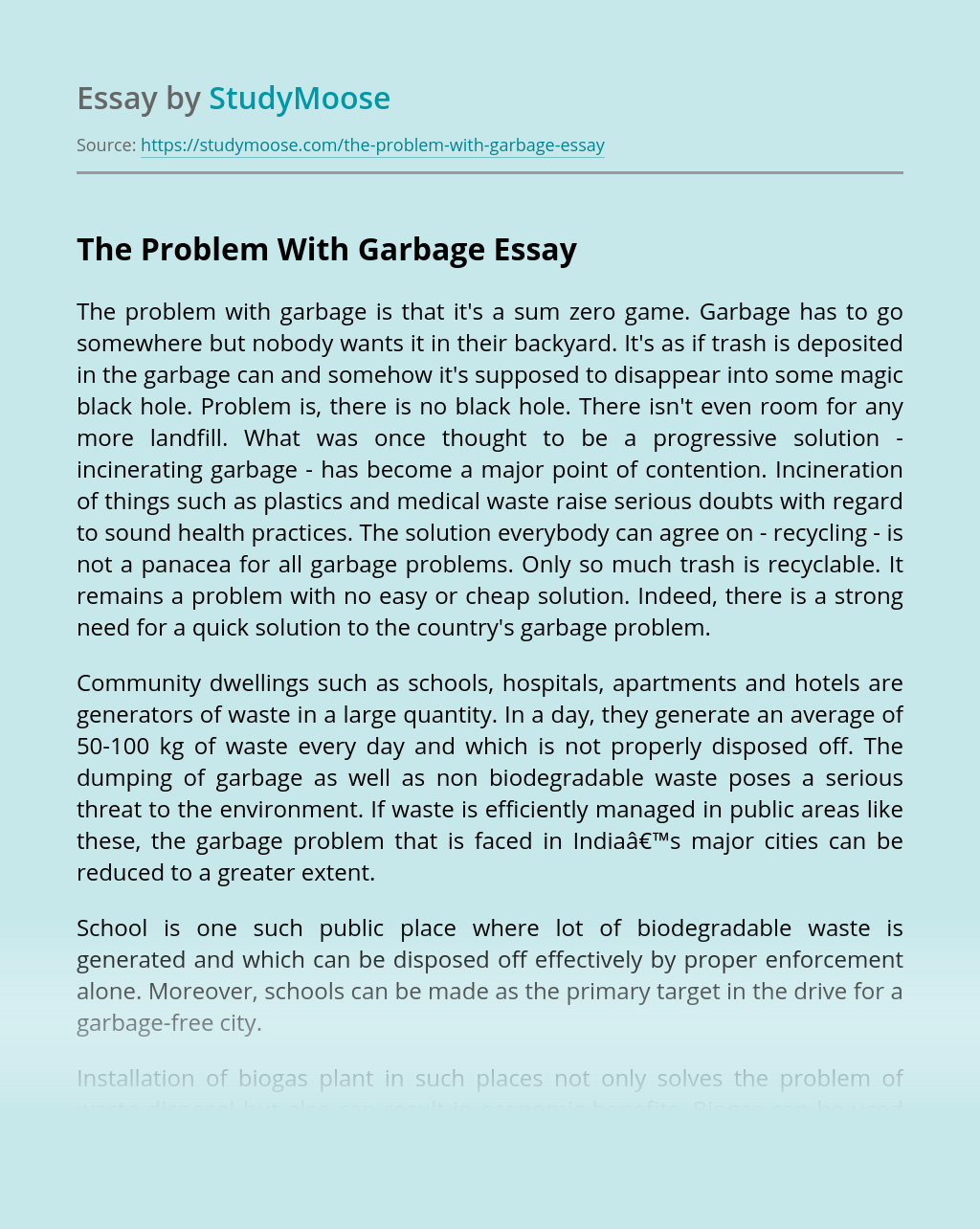