The political impact on society

In this case study I will be analysing the impact of political, legal, and social factors on business. The company that I will be using for this case study is Jessops, which is a British photographic retail company. Founded in 1935, Jessops has established itself as the UK’s leading photographic equipment retailer, selling camera equipment, photo equipment and other merchandise with regards to photography. Operating with over 200 stores across the UK, an online store and a customer call centre, Jessops has become a major photographic brand name even after its financial problems.

The first factor that I will be covering is political factors and how they influence businesses and in particular Jessops. Political factors will cover governmental regulations and laws and how they affect Jessops business operations. The second factor that I will be covering in this case study is legal, in which businesses must comply with legal regulations within their businesses which range from the equal pay act to the race relations act and everything in between.

The third factor that I will be covering in this case study is social factors, which include bankruptcy and modernisation etc. Political Factors:

Political factors can have a major and dramatic effect on a business’s operations and how it runs. Businesses can be affected by many aspects of governmental policy and in particular all businesses must abide to the law. They must also consider the impact of any forthcoming and future legislation on their business and its operations. Businesses must also take into action the more generalised political ambitions of the current government.

For example the current conservative-led coalition government is reducing jobs in the public sector and is hoping that the private sector will grow to create new jobs in the economy. The government’s emphasis on private sector growth could provide opportunities for Jessops if it leads to a more buoyant economy. One issue that affects manufacturers and retailers of electrical goods is the disposal of these goods at the end of their life. As recycling is on high public agenda because of the damage not recycling has on the environment.

Because of this, retailers such as Jessops who sell electrical goods such as cameras and printers must abide to the governments regulations and legislations on how to deal with products like this. In order to contribute to these regulations Jessops regularly donate to a national fund that assists local politically set regulations for the business but it also means that Jessops gain a competitive advantages over business who deal in electrical goods who have not taken this initiative. Changes to political policy could end up having a dramatic effect on businesses like Jessops. After being bought during their financial woes by Peter Jones, Jessops has continued to re-open stores that closes when it was hit by administration but it still has not been able to fully pay off the amount of money it has owed the government after going into administration.

If a new legislation came into place that could change the way these type of debts were paid it could mean that if they were ever to be put into a similar situation as they were previously they might end up having to declare bankruptcy, at which point without another buyer Jessops would be condemned. Do political factors have a major influence on Jessops? In my opinion political factors can and do have a major effect on Jessops as a business and also its day to day running’s. Because the business has to regularly comply with rules and regulations set forth by the government which can alter the way a businesses has to operate. If Jessops did not comply with certain rules and regulations then they could end up with legal problems which would cause negative notoriety and publicity.

As most people know, society is constantly changing with examples like fashion and tastes. Young customers are more likely to use digital technology, to shop online and to prefer online methods to print images. Older generations are more likely to stay with traditional methods that they trust and are accustomed to. For example, they are more likely to want to have their photos developed and printed in-store. Jessops have to meet the needs of all customer types in order to maximise possible revenue by making sure everyone can buy their products. It is incredibly important that Jessops cater to the more traditional style customer as well and the more unorthodox style of customer. It is estimated that 65% is still associating standard photo prints, stereotypically the ‘old fashioned’ method. However in contrast to this, Jessops has responded by delivering its multi-channel strategy using modern technology. An example of this is iPhone applications that allow people to search through the products and services that Jessops offer and purchase them through their phone.

As well as meeting the needs of different generations of customer, Jessops also has begun to produce products for the niche market. An example of a product they provide for this market is service for students who need to print portfolio for their courses etc. This is a service that not many of their competitors provide, giving Jessops a competitive advantage. Another social factor that has affected Jessops was when the business went into administration; this comes into the social sector because of the negative publicity that came about with it. One social factor that affects Jessops at this point in time is the high consumer demand and standard.

To respond to this social change Jessops now offer a 25 minutes service for prints. This again gives Jessops a competitive advantage over their business rivals who provide similar products and services. Do social factors have a major effect on Jessops? I believe that, although Jessops is not majorly affected by social factors, that they are indeed influenced by social factors. Complying with customer demand is one of the major social factors that affect the way that Jessops operate.

The political impact on society. (2016, May 30). Retrieved from http://studymoose.com/the-political-impact-on-society-essay 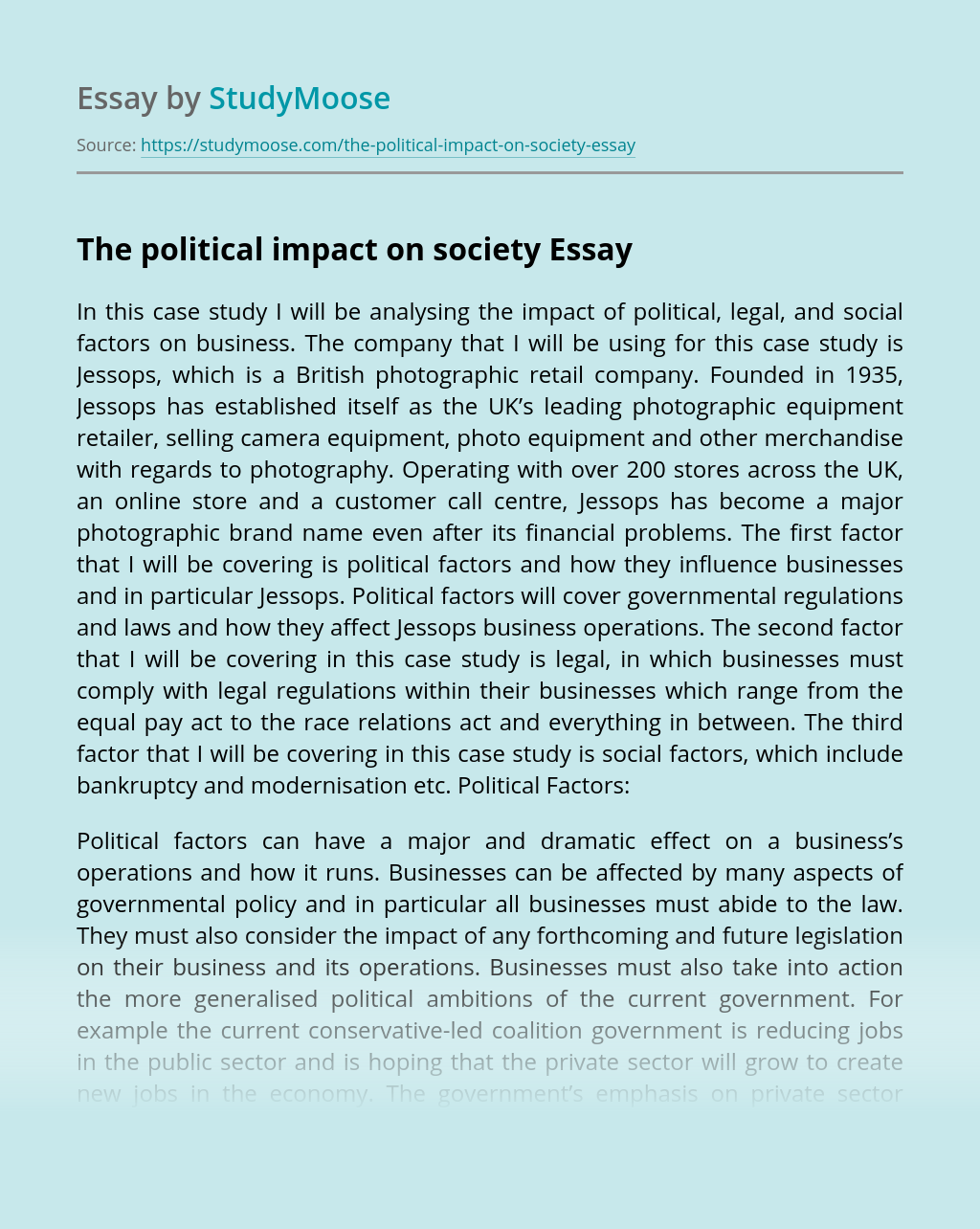 Don’t waste time
Get a verified writer to help you with The political impact on society
Hire verified writer
$35.80 for a 2-page paper
Stay Safe, Stay Original