The Play East is East

The play East is East is set I Sanford 1970s prior to the Indian-Pakistani war over Azad Kashmir. In this play we get to explore the problems that George is facing as a Pakistani immigrant who had an interracial marriage, and how he tries to make u for it. We also get to know the consequences of George’s actions to improve his Islamic status and how that effects the family.

First of all we are introduced to the play by several conflicts going on within the family.

Don't use plagiarized sources. Get your custom essay on
“ The Play East is East ”
Get custom paper
NEW! smart matching with writer

We can see that Sajit the youngest boy is going to be circumcised, regardless of what his feelings are towards the matter. Even when Sajit says “no, you’re gonna hurt me” George tries to bribe hi by saying “I buy you nice watch.” When that doesn’t work he says “when you die you go straight to hell. this shows cultural conflict as George tries to make his kids want what he wants no matter what they say.

I think this shows how George is determined to make his kids good Muslim eve though it may hurt them in the process.

We can also see that everyone uses a lot of bad language in the play. Even Sajit who is only 12 and the youngest swear in front of some of the family. I think that the kids are influenced by George who often says “bloody baster” even though he tries to be and make everyone a good Muslim, which makes the kids think its alright.

In Act 1 we are already introduced to two important conflicts. One being Sajit’s circumcision and the other being the arrange marriage of Tariq and Abdul. The engagement is a cultural conflict as in Pakistani culture arranged marriages are very important and Abdul and Tariq don’t want to get married.

The fact that Sajit and the other members of the family are not fully educated about their culture can be clearly seen by the audience all throughout Act 1. The circumcision is a very good example. Meenah and Sajit don’t know what it is and you know this when Meenah says “Is that what the chop is then?” This maybe because George refuses to take the time to explain anything to his kids and just expects them to do it and be good Muslims.

Sajit comes off as the least important character however he actually knows most about the family “I know what goes on in the house more than you do” but no one really notices him.

In Act 1 Scene 1 the audience can see the kids all eating bacon and sausages. This in Islamic culture but the way Meenah says “its not like him to mind a fry up” shows us that they do this all the time when George is not there. We can also see the use of dramatic irony for comical effect as when George comes home he starts talking to Maneer about being religious and Maneer has just been eating bacon.

In this play, we can see that the siblings are much closer and open with each other than with there father. We can see that in various parts of the play. Like when Maneer for example he tries to cover up for his siblings by saying “looking for my other shoes” when in actual fact he was hiding the sausage in Act 2 Scene1. He was the good son or “Ghandi” as everyone calls him. Another time we see it is when Saleem goes to talk to George about the engagement. Saleem gets beaten up when he says “why did you marry my mam? Pakistani women are so great.” When George has no answer he resorts to beating him up to gain control of the situation.

Abdul and Tariq are both characters who are in the same positions. I think Ayub Khan Din did this so that he could show how two different people reacted to it. Tariq and Abdul react to the engagement in completely different way. Tariq wants to run away but Abdul wants to stay as he says “I don’t want to live without a family.” Tariq doesn’t really care about what his dad thinks but Abdul is hurt at the fact that his father doesn’t trust me.” Why doesn’t he trust me…makes decision in my life as if though he owns it.”

In Act 2 Scene 5, the play reaches its climate. Mr Shah plays a very serious character in this scene. I think, if it weren’t for him, the farce wouldn’t be as comical. As he comes in, George and everyone else tries toimpress him. Ella tells them to “get the posh cups” and Meenah puts a veil and Maneer puts a tie on. As the play moves on when Mr Shah shows the picture of his girls nobody talks about the girls but instead they talk about the frames. “Oh, they are quite hefty aren’t they…frames I mean!” we also see that Meenah struggles to keep in her laugh.

Comedy is a light-handed way to show serious issues. I think the way Ayub Khan Din chose to tell his audience about the cultural identity of different members of the same family and how they tried to deal with it. George thinks he has a high status but in actual fact he doesn’t. Maneer is seen as the good son so is a lower status in the eyes of his siblings as they are slightly jealous that there fathers likes him more then them. All Abdul wants is to fit in somewhere so tries to be like the British kids but when he doesn’t fit in there he realizes were he belongs id with his family.

By Ayub Khan Din talking the experiences of different characters rather than just one, suggest that it is no one in the play is a villain as they all have reasons ,hat they think are very important, for what they do. This play makes us think about how we judge people and how we should never judge a book by its cover.

The Play East is East. (2020, Jun 02). Retrieved from https://studymoose.com/the-play-east-is-east-essay 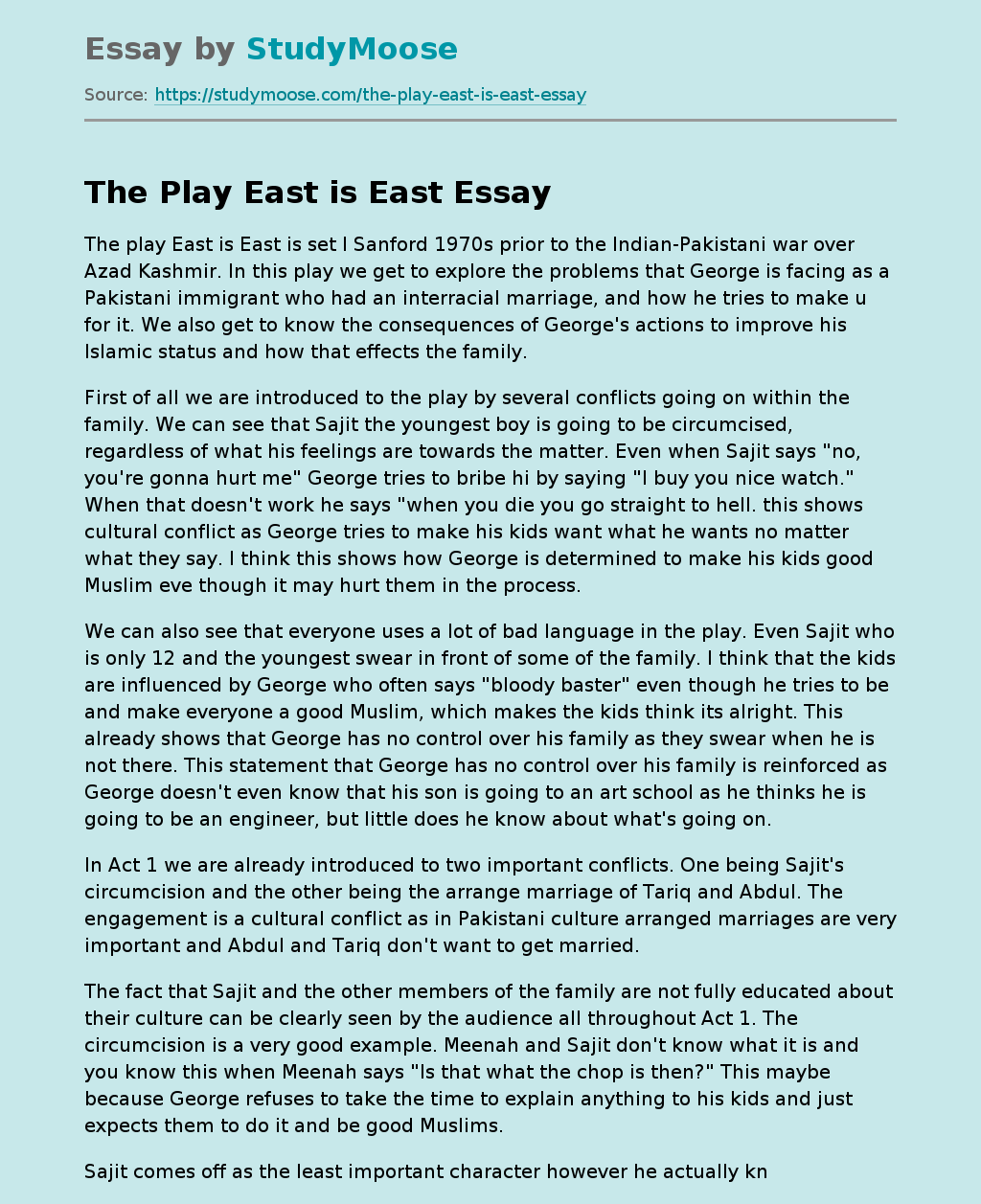