The Tatler was a single-sheet paper that came out three times a week and in the beginning, consisted of short paragraphs on topics related to domestic, foreign and financial events, literature, theater and gossip. Each topic fell under the heading of a specific place, such as a coffee house, where that discussion was most likely to take place. (Mackie 15) Isaac Bickerstaff, the sixty-something fictional editor, narrated The Tatler and his thoughts on miscellaneous subjects were included under the heading “From my own Apartment.

Don't use plagiarized sources.
Get Your Custom Essay on The Periodical Essays Just from $13,9/Page

As The Tatler progressed, these popular entries began taking up more and more space until the first issue consisting of a single, “From my own Apartment” essay appeared on July 30, 1709. (DeMaria 534) In an attempt to appeal to his female audience, Steele introduced the character Jenny Distaff, Isaac Bickerstaff’s half sister, and she narrated some of the essays later in the periodical’s run. (Italia 37) The last issue of The Tatler appeared in January 1711 and by the following March, Steele launched a new periodical, The Spectator, with Joseph Addison.

The Spectator was published daily and consisted of a single essay on a topic usually having to do with conduct or public behavior and contained no political news. The Spectator was narrated by the fictional persona, Mr. Spectator, with some help from the six members Spectator Club. While The Tatler introduced the form of the periodical essay, “The Spectator perfected it” and firmly established it as a literary genre. The Spectator remained influential even after it ceased publication in 1712.

Other eighteenth century periodicals, including Samuel Johnson’s The Idler and The Rambler, copied the periodical essay format. Issues of The Tatler and The Spectator were published in book form and continued to sell for the rest of the century. The popularity of the periodical essay eventually started to wane, however, and essays began appearing more often in periodicals that included other material. By the mid-eighteenth century, periodicals comprised of a single essay eventually disappeared altogether from the market. (Graham 68-69) 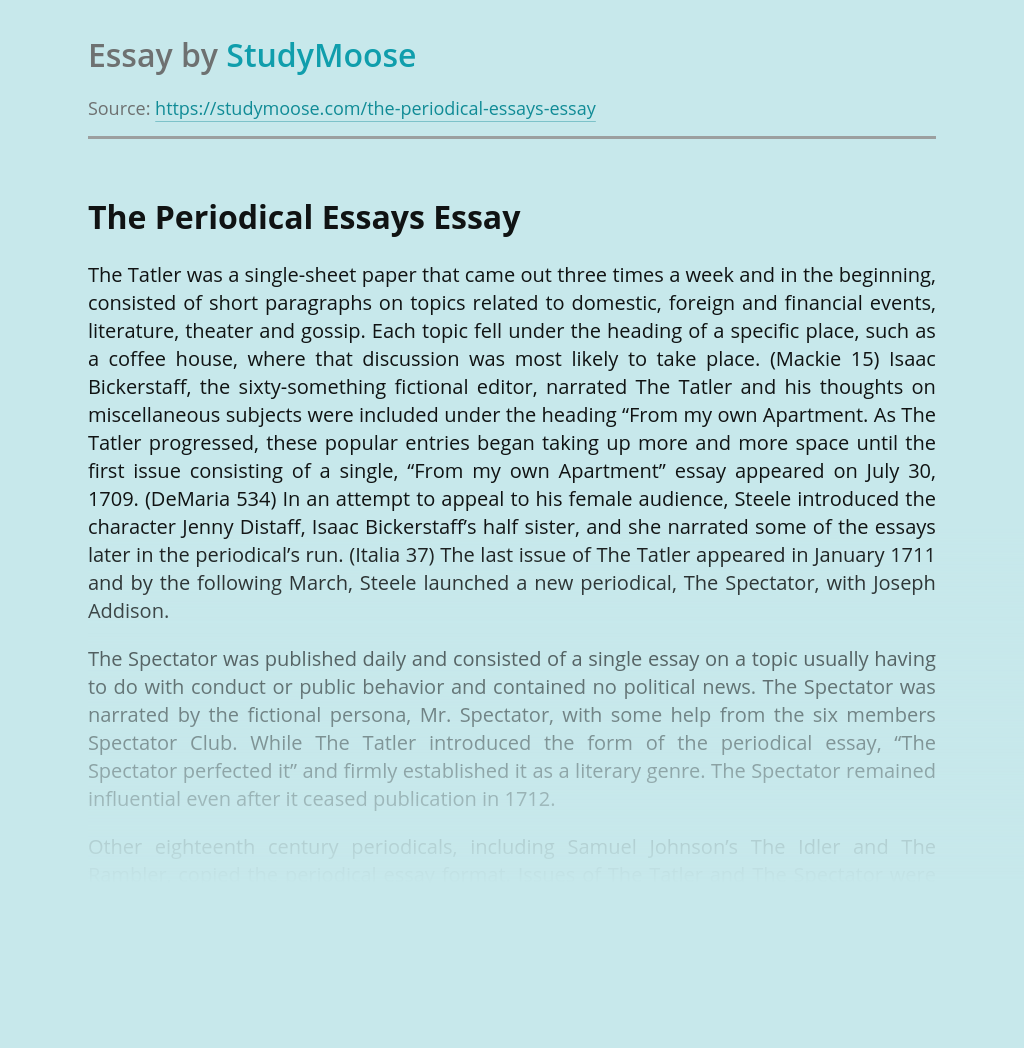 Rate this post Ethos – “Utterly, indeed, should I despair did not the presence of many whom I here see remind me that in the other high authorities provided by our Constitution I shall find resources of wisdom, of virtue, and of zeal on which to rely under all difficulties.” In this section Jefferson names...

Rate this post As children we often cling to the storybook romance. The “happily ever after” cliché certainly appeals to the young romantic: however, the harsh reality of life may soon prove this to be foolishly sentimental. In the novel Their Eyes Were Watching God, Zora Neale Hurston explores these circumstances as she outlines Janie’s...

Rate this post HAMLET “How strange or odd some’er I bear myself (As I perchance hereafter shall think meet To put an antic disposition on)” Madness Antic disposition presents the fact that Hamlet is going to put on his madness and act it out for other people. “There’s method in my madness” HAMLET Although not...

How does Moliere use irony as a tool of satire in Tartuffe?

Rate this post Satire is defined in the Merriam-Webster Dictionary as a “literary work holding up human vices and follies to ridicule or scorn. ” Aside from this definition, satire can also be described as a particular literary way to possibly improve humanity and the society. In Tartuffe, Moliere censures and ridicules the human behavior...