The Museum of Vain Endeavours

In the short story, “The Museum of Vain Endeavors,” the author sarcastically points out humanity’s fixation on human failures. Also, he suggests that mishaps rather than paying tribute to successes and achievements.

Humanity’s fixation on human failures is based on one’s trying to something with the best of intentions, but is really meaningless. In the beginning of the story, a man as a narrator shows how much he is engaged in spending a whole day in the museum and examining man’s insignificant endeavors, ones all in vain.

Don't use plagiarized sources. Get your custom essay on
“ The Museum of Vain Endeavours ”
Get custom paper
NEW! smart matching with writer

That’s why the museum is a vain endeavor in itself, for example, Virginia saying, “I’m tired of all this coming and going.” “We’ll never get it all classified. They’re just full of Vain Endeavors. (pg.27)” One is unable to achieve cataloging all the vain endeavors. Also, Virginia goes from nothing from nothing in her promotions, an illusion that her actions are meaningful even though they are meaningless.

What people believe, including the museum sees as its purpose, is largely nonsensical endeavors.

How serious people can be in their endeavors but can’t see the realities of it all. Virginia becomes arrogant in her seriousness. For example, the quote “I tried inviting her to come for a walk…she’ll only talked to me within the grey, dusty walls of the museum. (pg.27)” reveals with an irony which refers that people take some intentions seriously, but don’t know ho to deal with them. Human’s mishaps explain that people try to find their purposes and meanings, but ends with meaningless things.

The museum of vain endeavors extends to museum itself, people, and Virginia to believe meaningfulness seriously, but conclude with uselessness. So, it implies that humanity’s fixation on human failures and mishaps which doesn’t lead to achievements.

The story sets after the total destruction of a war with a quote, “They were the scars of gigantic bombs.” And, there are last four survivors in the world after a nightmare. These are the significance

The Museum of Vain Endeavours. (2016, Jun 04). Retrieved from https://studymoose.com/the-museum-of-vain-endeavours-essay 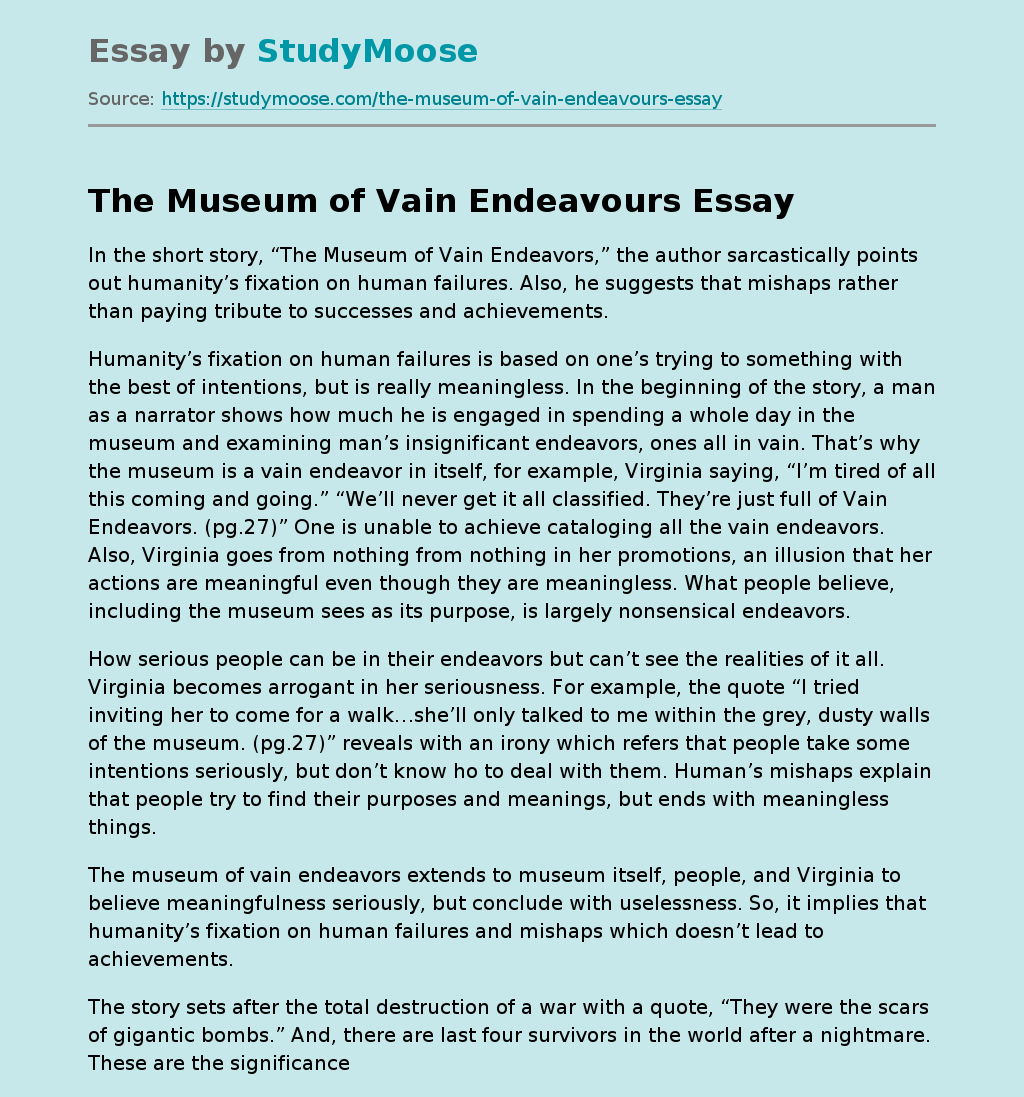