The Jaguar by Ted Hughes

In The Jaguar the first two verses are used to describe the zoo in which the animal resides. He slowly builds up to the Jaguar by describing the docile animals around and creating the atmosphere of almost unsettling stillness. He emphasises this disturbing aspect of the zoo with similes such as ‘parrots shriek as if they were on fire’ and ” strut like cheap tarts”. This builds visual imagery in the audience’s mind as it emphasizes the lack of movement in the first stanza.

The use of enjambment further reinforces the sense of motionlessness of these animals. The tigers and lions, animals that are thought of as fierce and ferocious, as described here as sleeping and fatigued in order to create contrast with the jaguar, so that its brutality and energy is enhanced.

The next stanza continues from stanza one and begins with ‘lie still as the sun’. This phrase illustrates the ordinariness and dullness of the animals because of the sharp sounds of each word.

Hughes again uses metaphors to appeal to the audience’s sense of sight in describing the boa constrictor as fossils, which strengthens the image of the animal as timeworn and ancient as a result of their captivity. Alliteration is immediately followed as can be seen in the phrase ‘Stinks of sleepers from the breathing straw’. The reoccurring ‘s’ sound parallels the ordinariness and monotonousness of the animals at the zoo.

The third stanza begins to introduce the jaguar as the poet describes the way the visitors flock towards it cage to see the graceful and deadly animal mesmerised by its stare and by a morbid fascination with death.

The continuous flow of the first two stanzas ends from the beginning of the third stanza, which contains the description of the jaguar, this structure of enjambment distances the jaguar away from the other animals and provides focus and adds significance to the jaguar. The punctuation marks in ‘stands, stares, mesmerized’ serves the purpose of highlighting the jaguar’s magnetism because the beat created between these words mirrors the crowd’s sudden awareness of the jaguar, it also produces a contrast with the lack of movement of the first two stanzas.

Enjambment is again used by Hughes to allow the audience to immediately recognise the domination of the jaguar. “Through the prison darkness after the drills of his eyes” is the first definite picture that is portrayed of the jaguar. At this point the audience is witnessing the jaguar journey of roaming towards freedom and wilderness in his imagination. The connotation associated with the eye as penetrating and probing into one’s soul for one’s deepest and darkest secrets reveals the inner will and power of the jaguar. The rhythm created in this phrase assists in displaying the jaguar’s natural and flowing movement while trapped in a confined space. Hughes is distinguishing the aloofness and superiority of the jaguar as compared with the other animals, because the jaguar has the ability to break through its imprisonment in his imagination. The crowd is able to see ‘life’ in the jaguar that is lacking in the other animals.

The next stanza construes images on the strength and fierceness of the jaguar despite being locked behind the cage. The words ‘fire’ and ‘blood’ suggest violence, aggression and rage. Hughes is reiterating that although the jaguar is behind ‘bars’ he has the power to escape as if no bars were attached because of his defiance against imprisonment. The jaguar’s passion and intensity are reflected in this stanza as Hughes captures the imaginative journey of both the crowd and the jaguar. The crowd is in awe of this beast whose zeal and instinct echoes its movement and physical presence.

The final stanza depicts the jaguar’s image of freedom as we are given insight into his mind. The actual image is not fully portrayed instead Hughes focuses on the picture of freedom to move and hunt without the restrictions of his prison. The description of the jaguar as ‘visionary’ and the metaphor in ‘his stride is the wildernesses of freedom’ intensify the breaking through of physical boundaries through the power of the imagination. The poet allows the reader to imagine the jaguar in its natural habitat, as an animal that emanates terrifying energy behind bars in its wilderness.

The imagery of being in a rainforest, being stalked by this immensely powerful creature, camouflaged and barely visible is conjured up in the reader’s mind as they are being carried along on the imaginative journey. The last line ‘over the cage floor the horizons come’ refers back to the jaguar’s dream of freedom, it stresses that physically the cage is the boundary but on the spiritual plane, it is only the beginning.

The images in the poem that linger are of forms of entrapment, of the essence of the yearning to be free, of thought as elusive, of nature as untameable. The jaguar’s imaginative journey has taken it away from its captivity and has carried the crowd on an imaginative journey with it. It shows to the reader that the power of imagination is able to dissolve any physical boundaries as long as one dares to dream and envision, and that the mind allows one to reach places on a level that surpasses any barrier, obstacle or limit.

The Jaguar by Ted Hughes. (2016, Jul 09). Retrieved from https://studymoose.com/the-jaguar-by-ted-hughes-essay 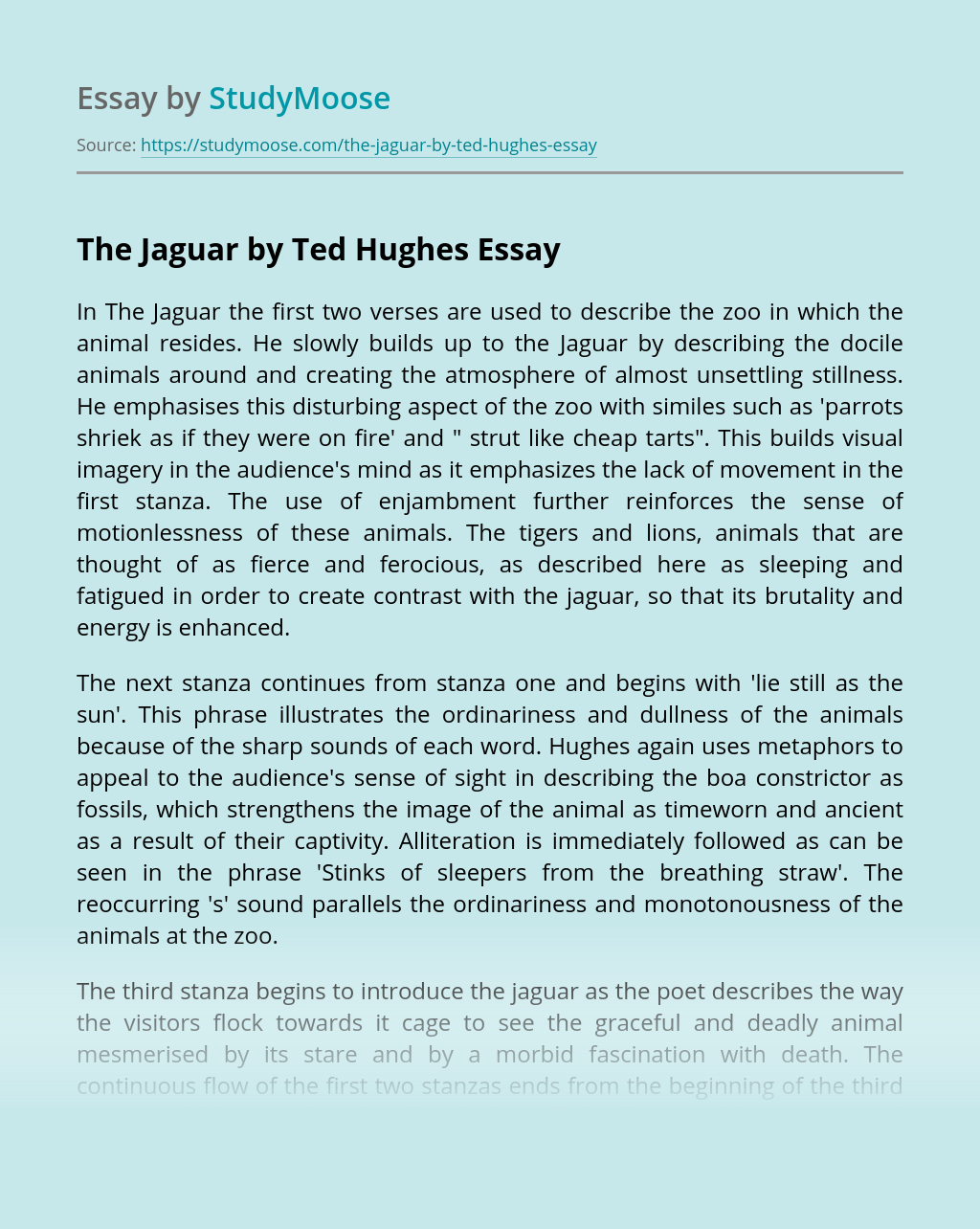 Throughout Neutral Tones, Hardy effectively communicates his feelings about love using the natural world and its (neutral) colours and characteristics. His use of rich imagery of the natural world produces a melancholic note about love, which resounds through the whole poem portraying the end of an affair between Hardy and his former lover. The backdrop...

From the area of study on journeys, several texts evidently provide and present ideas, concepts and themes on journeys. A journey can be considered a physical movement from one place to another, but there are much deeper meanings conveyed in a journey. This can be seen in two of the Peter Skrzynecki’s poems in the...

Get Essay
The Century Quilt Analysis

Waniek’s “The Century Quilt” not only illustrates the importance that her Meema’s quilt had in her life but also represents her family, specifically her grandmother. Through many literary devices such as vivid imagery, symbolism, and structure, the author is able to create not only a reminiscent tone, but also depict how Waniek is hopeful for...

The word “gothic” evokes feelings of doom, depression, death and decay. It suggests old extravagant cathedrals and falling down buildings. “Gothic” also suggests doomed relationships and lost loved ones. Gothic literature is meant to scare readers as well as to remind readers of their own darkness, of the darkness that they are capable of being....

Relationship in A Poem The Bean Eaters

Did you know Gwendolyn Brooks was the first African-American, male or female, to win the Pulitzer Prize (eNotes. com)? Brooks was born on June 7, 1917 and began to have an interest in poem early in her life. Her first poem was published at the age of thirteen in the American Childhood Magazine in 1930....

The Correlation Between Behind Story and Symbol in Shelly’s Ozymandias

Background study Symbol is important in our life because symbol can be used to give information through picture, line, color, etc. For example, symbol that gives information or command through picture is picture mosque that usually presents in both side of the road. It gives us information that there is mosque near that road. Other...

Analysis of A Poem The Great Morrow

The poem “The Great Morrow” by John Donne mentions the pleasures of love when one has found the best person. It also mentions the naivete and dissipation youth prior to coming into the complex knowledge of the love that life can bring. The poet utilizes a variety of literary gadgets to decorate the poem, producing...

Plath’s arrival of the Bee Box is a poem which depicts a box containing bees. In regards to this theme, it is not the only poem that Plath has approached bees as she wrote The Beekeeper’s Daughter. Additionally this poem can also be seen as a classical allusion to Pandora’s box as it concerns a...