The Hounds of the Baskervilles

Women in the Victorian Era

Women in the Victorian Era were secondary citizens in comparison to men. Even those of higher classes were still treated as below in status and equality in relation to men. ‘The Hound of Baskervilles’ contains female characters of both upper and lower class. Women were expected to always be well-dressed in the Victorian age. Being a woman of lower class was tough however the book portrays all women to be specific about their appearances no matter their class.

Don't use plagiarized sources. Get your custom essay on
“ The Hounds of the Baskervilles ”
Get custom paper
NEW! smart matching with writer

Stapleton shows the importance of clothes to women of lower class as she states when running after Watson that ” I had not even time to put on my hat”. This shows that even to a women of such class going out without a hat is wrong. Laura Lyons is the daughter of Frankland, she is a middle class citizen whose expectations are of those similar in appearance to lower class citizens. However when it comes to marriage in her class, daughter’s fathers chose their husband and then the daughter was given dowry (money to be taken into marriage).

Laura is the typical “wronged woman”

However in Laura’s case she is the typical “wronged woman” type as she foolishly gets married to a lower class artist, who leaves her. As this marriage went ahead without her father’s consent, he followed the belief’s of a typical Victorian middle class man and disowned her. Her class fell due to Stapleton and Sir Charles and her actions were looked at as distasteful and wrong.

“.. Her father refused to have anything to do with her, because she married without his consent… ” is proof of the break down in relationship between father and daughter.

Laura accepts her father’s belief’s and says that “There is nothing between my father and me . . “, meaning that she accepts her mistakes. Discrimination towards women and a glimpse of the treatment that women put up with arise when Watson questions Laura about her arrangement to meet Sir Charles in the garden and she replies “Do you think a woman could go alone at that hour to a bachelor’s house? ” The response makes the readers apparent that the Victorian society would disrespect her if found with Sir Charles, highlighting the moral issues and attitudes in the late 19th century.

Contemporary morality includes the society’s views on divorce, crime, discipline and punishment. Divorce was seen as an action that only men could do to women, however women could not divorce men. When Laura Lyon’s divorce was heard by the community, she was unable to receive help or money from family. She had to work her way out of the situation and earn her own living. Her respect had disappeared from many believers in women being second class to men and her life was turned upside down. Family is extremely important to the Victorians e.g. Barrymore’s when Mrs Barrymore’s brother dies.

Even when Mrs Barrymore reveals who the escaped criminal is, his behaviour is explained through a brief discussion of childhood discipline “… he came to think that the world was made for his pleasure, and that he could do what he liked in it. ” Discipline, good behaviour, manners of children and family is important to all classes in the Victorian Era as Watson comments (with an unmistakable Victorian sterness) that Seldon was “.. the child who had clung to her hand” and how he was the “…little wilful boy of her own girlhood.. “.

Mrs Barrymore still mourned for her brother even though he was a criminal “… She wept bitterly into her apron. ” Punishment for the crime is a strong belief which many Victorian’s follow. The idea in the novel that the good should be rewarded and the bad punished (the two criminals Seldon and Stapleton) makes ‘The Hound of the Baskervilles’ a very moral book. Even though there are acts of nasty criminal activities there are also stories concerned with social justice and honour.

Threats are being made not for death nor destruction but towards middle-class citizens with regard to money, property and inheritances. These actions are those that then lead to murder and other acts of violence. The story is set in a time of change and so the Victorian’s everyday life aspects included the use of telegrams/District messenger offices (where Holmes sends telegraphs to communicate with friends in Dartmoor) instead of telephones, hansom cabs (trapdoor located at the top) and carts instead of cars and taxis, and trains.

Lighting in the 19th century was changing, lamps and candles were used however Sir Henry’s first reaction to the darkness of the Baskerville Hall is to install a generator and electric lights. The dress codes of the Victorian society was an example of the strict beliefs in appearances and classes. A “frock-coat” was an example of a common piece of clothing that an Upper class man would wear. The polite formalities of those that a typical Victorian man would follow e. g. Watson “I had raised my hat” towards women when meeting/greeting them was normal behaviour for those who had excellent manners and were taught from a young age to behave well. The same rules went for women in relation to the expectations of them wearing a hat and so when Miss Stapleton apologises and comes out without a hat, the everyday life of the dress code becomes even more clear. In conclusion the Victorian Society were very apparent about everyday details of the communities lives varying from the appearances and clothes to the hierarchy of servants and the ideas on general life.

People were extremely pressured into acting in one certain way and if this was not followed then they would be punished or lowered to another class meaning that their entire life and everyone’s opinions of them would be affected. If a citizen’s actions was incorrect for their class/status then they would be branded as disrespectful or immoral. ‘The Hound of the Baskervilles’ is a detailed novel on the expectations and general lifestyles for the people living in The Victorian Era and Arthur Conan Doyle shows a clear insight into the Contemporary morality, lifestyles and roles of each and every citizen living in this period of time.

The Hounds of the Baskervilles. (2020, Jun 02). Retrieved from http://studymoose.com/the-hounds-of-the-baskervilles-6446-new-essay 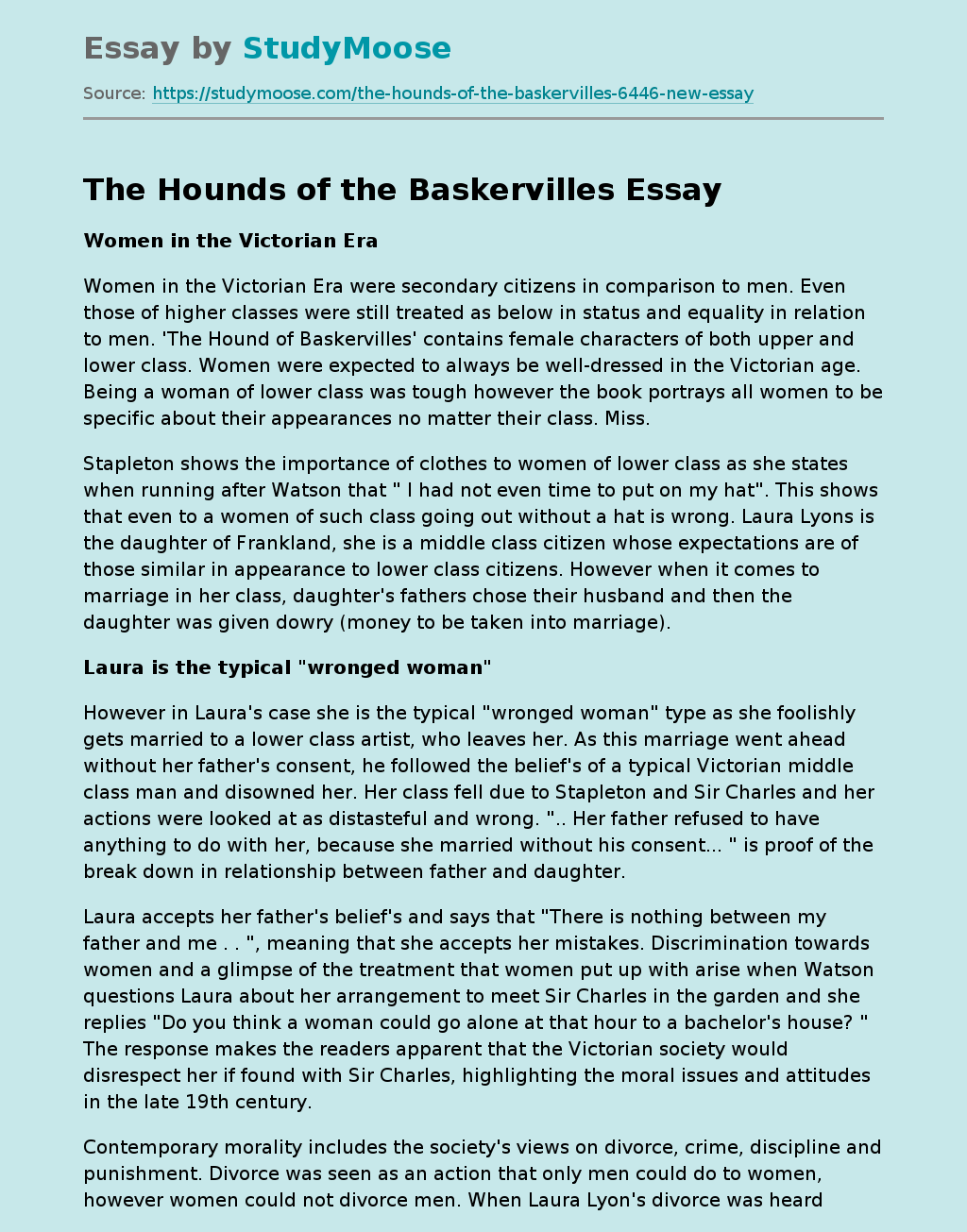