The Hero Who Failed to Become a God

The epic of Gilgamesh, the most important and most complete work of legendary poetry, written since the Sumerian period between 2350 and 2750 BC, about King Gilgamesh, who lived in the city of Uruk, located in Mesopotamia on the eastern bank of the Euphrates River, his character is a collection of mythical and heroic tales, which recount the news of his extraordinary works, and his desperate quest to learn the secret of eternal life.

This epic has been developed in poetic creations written on the cuneiform script since the Sumerian period, followed by attempts in the Akkadian, the Thabic, Babylonian and the Nymphic periods.

Don't use plagiarized sources. Get your custom essay on
“ The Hero Who Failed to Become a God ”
Get custom paper
NEW! smart matching with writer

Their appearance was complete at the end of the second millennium BC, Banipal »in the library of Nineveh.

It has been written about this saga countless studies, and saturated with criticism and scrutiny and treatment, yet we continue to follow from time to time new studies about them, and read novels, stories and creative treatments derived from her inspiration, and I think the secret in this interest and admiration is that this epic is still tainted with the cover of the imagination, and the mythic energy, and diagnoses the reality of human and eternal problems, which revolves around the eternal question: What is the purpose of life ?! Why do we die after we came to the arena of life and walked in its paths? These questions do not answer unequivocally .

. Real literature is what addresses the inability of science, and confronts the crises of human psychological, and the pains of pain, and illuminate his hopes .

. Here we can know the secret of this global interest in the epic of Gilgamesh flying in spaces far from the tragic reality, to a perfect world full of goodness, truth and beauty …

This real epic is intertwined with the mythical, fictional reality, and its reality is decorated with wisdom, and its imagination is cluttered with symbolism. It is realistic in terms of man’s life and death, which is symbolic because its exaggerated events have profound connotations and far-fetched myths about this idea. ‘Gilgamesh’s dismay after the death of his close friend Enkidu having the feeling of every human being as losing someone precious to him. The overthrow of Gilgamesh with the tumultuous bull, and his struggle with the Humbaba, which blocked its path in the cedar forest, rights to the barriers that hinder his communication with his brother and to the conflict between good and evil. ‘

The Akkadian version of the epic is believed to be based on a Sumerian version dating back to 2100 BC. Years after the discovery of the tablets 11, another painting was found by some to be a continuation of the epic and others considered it an independent work and another story because it was written in another style in which Ankido is still alive. The saga was first translated into English in the years after 1870 by George Smith, an archaeologist specializing in the Assyrian period in ancient history who died in 1876.

The epic begins with the talk of Gilgamesh of Uruk, whose father was a human being, his mother a goddess,which makes him two-thirds god and one-third man and because of the vulgar part of his blood he begins to realize the fact that he will not be immortal. In the epic, we see that Gilgamesh was not a beloved property by the inhabitants of Uruk, where he had a bad habit of having sex with every new bride on a night she entered before the groom entered and forced people to build a huge wall around Uruk.

The people prayed to the gods to find a way out of the injustice of Gilgamesh and responded to the gods and one of the goddesses named Arturo who create a brutal man with thick hair covering his body and live in the wild eat grass and drink water with animals that is in contrast to the figure of Gilgamesh and some analysts believe that there Symbols of the conflict between urban and urban life that the Sumerians gradually began to embrace after they left the life of simplicity and agriculture of Enkidu.

Enkidu rescued the animals from the fisherman’s catch. Fishermen raised their grievances to King Gilgamesh, who ordered one of the maids to go and try to lure Enkidu to have sex with her. In this way, the animals would move away from Enkidu and become an Enkidu and a civilian. King Gilgamesh’s plan began to succeed. The maid of the temple, whose name was Shammat, worked as a servant in the temple of the Ishtar gods by teaching Enkido the civic life of how to eat, dress and drink wine and then begin to tell Enkidu about the strength of Gilgamesh and how he enters the bridegrooms before their husbands enter them. He decides to challenge Gilgamesh in a fight to force him to abandon the habit. The two wrestle fiercely as the two converge in power, but in the end Gilgamesh wins and admits Enkidu with the power of Gilgamesh. After this incident, the two become close friends.

Gilgamesh is always trying to do great work to keep his name immortal. One day he decides to go to a forest of cedar trees and cut all his trees. In order to achieve this, he must destroy the forest keeper who is a huge and ugly creature named Humbaba. It is worth mentioning that the Cedar Forest was the place where the gods live and it is believed that the place of destination is now located in the region between Iran and Bahrain.

Jungle keeper Humbaba, Gilgamesh and Enkidu are fighting the sacred bull. Gilgamesh and Enkidu start their journey towards the forests of cedar trees after receiving the blessing of Shamash, the sun god who was also the god of wisdom of the Babylonians and Sumerians. He is the same God we see in the Hamorabi Masculine Mass. He hands the laws to King Hammurabi and during the journey Gilgamesh sees a series of nightmares and dreams but Enkidu, who was himself is afraid of the idea of ​​killing the forest keeper Gilgamesh constantly assures that his dreams carry the meaning of success and victory.

When they reach the forest, they begin to cut down the trees. The forest guard Humbaba approaches them and begins a fierce fight, but Gilgamesh and Enkidu prevail. Humbaba falls on the ground and begs them not to kill him. But his begging was futile. The killing of the forest guard provoked the wrath of the gods of the waters of Enlil, where Enlil was the goddess who had been given the responsibility of guarding the jungle in Humbaba.

After the death of the forest guard, who was considered a scary beast, Gilgamesh begins to spread his fame. The goddess Ishtar tries to approach him for the purpose of marrying Gilgamesh. But Gilgamesh rejects the offer. Ishtar feels insulted and angered. She asks her father, Ano, the god of heaven, to avenge her pride. But Enkidu is able to catch the bull’s horn and Gilgamesh kills him.

After the killing of the sacred bull, the gods meet to consider how to punish Gilgamesh and Enkidu for killing a sacred creature. The gods decide to kill Enkidu because he was a human being, but Gilgamesh was in his veins the blood of the gods by his mother who was a goddess.

After the death of Enkidu, Gilgamesh is very sad for his intimate friend, who does not want to believe the truth of his death. He refuses to bury the body for a week until the worms begin to emerge from the body of Enkidu. Gilgamesh bury Enkidu himself and set off in the wild outside of Uruk. In addition to Gilgamesh’s grief over the death of his close friend Enkidu, Gilgamesh was in the grip of himself, afraid of the fact that he must die a day because he is human, and immortal only to the gods.

Gilgamesh began his quest for eternity and eternal life. In order for Gilgamesh to find the mystery of immortality, he must find the only person who has reached eternity. His name is Utnapishtim, which some consider very similar if not identical to Noah’s character in Judaism, Christianity and Islam. During Gilgamesh’s search for Utnapishtim, he meets one of the goddesses Siduri, who was the goddess of wine. Sidory offers a series of advice to Gilgamesh, that Gilgamesh will enjoy what is left of his life instead of searching for eternity and that he should fill his belly with the best food and wear the best clothes and try to be happy with what he has, but Gilgamesh was insisting on his quest to reach Urshanabi to know the secret of eternity Sidori send Gilgamesh to Ur-shanabi to help him to cross the Dead Sea to reach the only human being who could achieve eternity. Even though Gilgamesh failed his test, Utnapishtim gives him an out.

Gilgamesh decides that he should stop and relax for a while. While he’s soaking, a snake slithers up, sneaks behind him, curls around the plant, and disappears. As he towels himself off he sees the plant is gone and is just defeated. He sits down and weeps. Gilgamesh must return home empty-handed. “Really, Gilgamesh is kind of an ambivalent figure. His journey has many successes, but also many failures. His bravery, or lack of respect, allows him to challenge and kill Humbaba, but also gets Enkidu killed. He proudly announces that he’s up to Utnapishtim’s challenge but he simply isn’t. At the end of the epic, Gilgamesh comes to terms with his limitations as a human. This completes the journey, achieving the final, crucial step: having the power and wisdom to live a good life, not an eternal life, but a good one. In Gilgamesh’s case, that means one where you aren’t a terrible king.”(Hannah)

So is he perfect? No. Is he even a role model? Definitely not. But can he serve as a symbol for an aspect of the human condition, of growing past mistakes and accepting limitations? Maybe. And perhaps that is what makes him a hero. (Dains)

The Hero Who Failed to Become a God. (2021, Dec 02). Retrieved from http://studymoose.com/the-hero-who-failed-to-become-a-god-essay 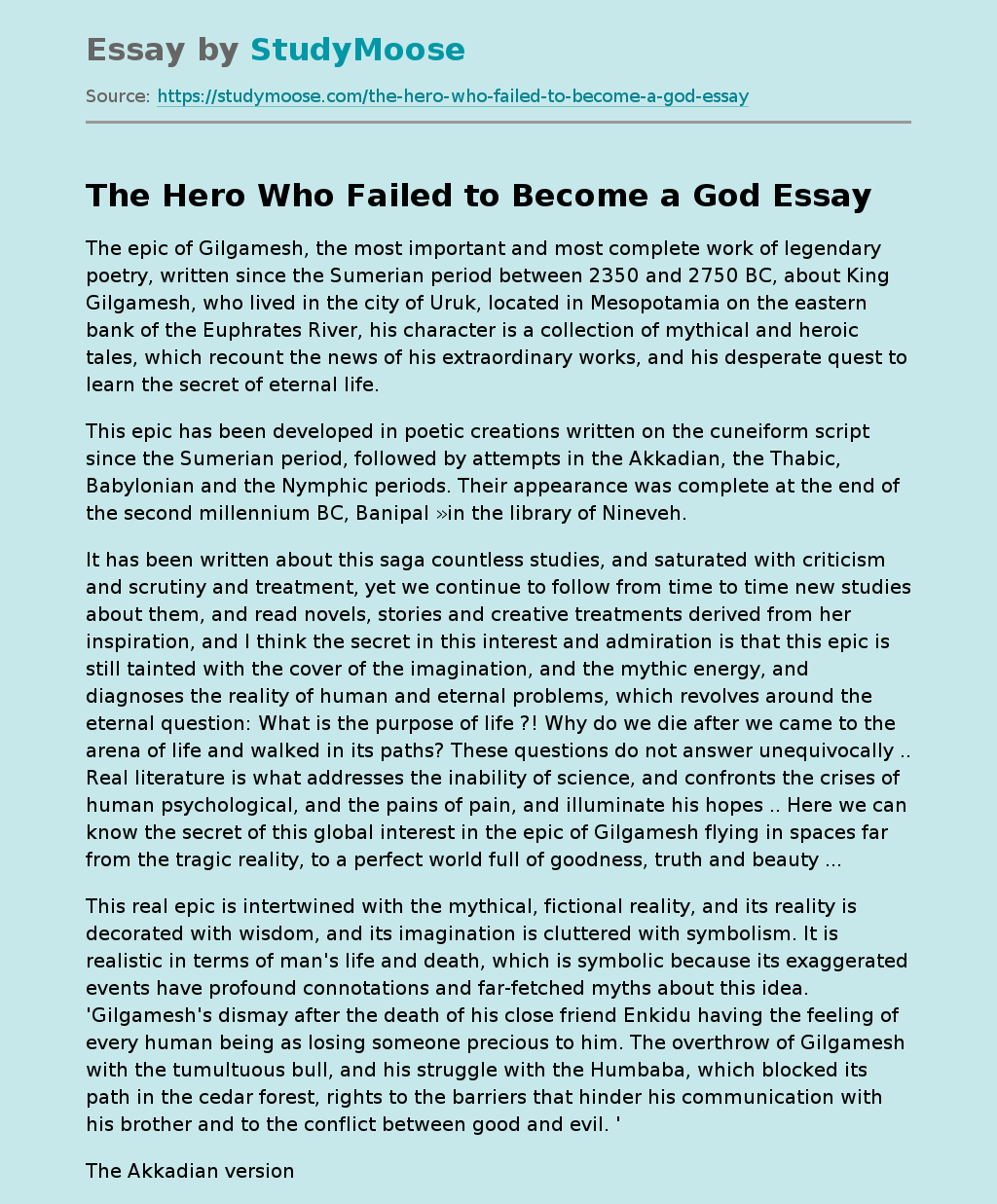