The hands of the blacks, by Luis Bernardo Honwana

I don’t remember now how we got onto the subject, but one day Teacher said that the palms of the black’s hands were much lighter than the rest of their bodies because only few centuries ago they walked around on all fours, like wild animals, so their palms weren’t exposed to the sun, which made the rest of their bodies darker and darker. I thought of this when Father Christiano told us after catechism that we were absolutely hopeless, and that even the blacks were better than us, and he went back to this thing about their hands being lighter, and said it was like that because they always went about with their hands folded together, praying in secret.

Don't use plagiarized sources. Get your custom essay on
“ The hands of the blacks, by Luis Bernardo Honwana ”
Get custom paper
NEW! smart matching with writer

Dona Dores, for instance, told me that God made their hands lighter like that so they wouldn’t dirty the food they made for their masters, or anything else they were ordered to do that had to be kept quite clean. Senhor Antunes, the Coca Cola man, who only comes to the village now and again when all the Cokes in the cantinas have been sold, said to me that everything I had been told was a lot of baloney.

Of course I don’t know if it was really, but he assured me it was. After I said yes, all right, it was baloney, then he told me what he knew about this thing of the black’s hands. It was like this: – ‘Long ago, many years ago, God, Our Lord Jesus Christ, the Virgin Mary, St. Peter, many other saints, all the angels that were in Heaven then, and some of the people who had died and gone to Heaven – they all had a meeting and decided to make blacks.

Do you know how? They got hold of some clay and pressed it into some second-hand moulds. And to bake the clay of the creatures they took them to the Heavenly kilns. Because they were in a hurry and there was no room next to the fire, they hung them in the chimneys. Smoke, smoke, smoke – and there you have them, black as coals. And now do you want to know why their hand stayed white? Well, didn’t they have to hold on while their clay baked? When he had told me this Senhor Antunes and the other men who were around us were very pleased and they all burst out laughing. That very same day Senhor Frias called me after Senhor Antunes had gone away, and told me that everything I had heard from them there had been just one big pack of lies. Really and truly, what he knew about the black’s hands was right – that God finished making men and told them to bathe in a lake in Heaven. After bathing the people were nice and white. The blacks, well, they were made very early in the morning, and at this hour the water in the lake was very cold, so they only wet the palms of their hands and the soles of their feet before dressing and coming into the world.

But I read in a book that happened to mention it, that the blacks have hand lighter like this because they spent their lives bent over, gathering the white cotton of Virginia and I don’t know where else. Of course Dona Estefánia didn’t agree when I told her this. According to her it’s only because their hands became bleached with all that washing. Well, I don’t know what to think about all this, but the truth is that however calloused and cracked they may be, a black’s hands are always lighter than all the rest of him. And that’s that! My mother is the only one who must be right about this question of a black’s hands being lighter than the rest of his body. On the day that we were talking about it, us two, I was telling her what I already knew about the questions, and she just couldn’t stop laughing. What I thought was strange was that she didn’t tell me at once what she thought about all this, and she only answered me when she was sure that I wouldn’t get tired of bothering her about it.

And even then she was crying and clutching herself around the stomach like someone who had laughed so much that it was quite unbearable. What she said was more or less this: ‘God made blacks because they had to be. They had to be, my son. He thought they really had to be… Afterwards he regretted having made them because the other men laughed at them and took them off to their homes and put them to serve like slaves or not much better. But because he couldn’t make them all be white, for those who were used to seeing them black would complain, He made it so that the palms of their hands would be exactly like the palms of the hands of other men.

And do you know why that was? Of course you don’t know, and it’s not surprising, because many, many people don’t know. Well, listen: it was to show that what men do is only the work of men… That what men do is done by hands that are the same – hands of people who, if they had any sense, would know that before everything else they are men. He must have been thinking of this when He made the hands of the blacks be the same as the hands of those men who thank God they are not black!’ After telling me all this, my mother kissed my hands. As I ran off into the yard to play ball, I thought that I had never seen a person cry so much when nobody had hit them.

What Is An Educated Filipino? Francisco Benitez

Great changes have taken place in the nature of our social life during the last twenty years. The contact with Americans and their civilization has modified many of our old social customs, traditions, and practices, some for the worse and many for the better. The means of communication have improved, and therefore better understanding exists among the different sections in our country. Religious freedom has developed religious tolerance in our people. The growth of the public schools and the establishment of democratic institutions have developed our national consciousness both in strength and in solidarity.

With this growth of national consciousness and national spirit among our people, we witness the corresponding rise of a new conception of education — the training of the individual for the duties and privileges of a citizen not only for his own happiness and efficiency, but for national service and welfare as well. In the old days, education was matter of private concern; now it is public function, and the state not only has the duty but has the right as well to educate every member of the community as well as the young, women as well as men — not only for the good of the individual bat also for the self-preservation and self-protection of the state itself. Our modern public school system has been established as a safeguard against the shortcomings and dangers of a democratic government and democratic institutions.

In the light of social changes, we come to the question: What qualities should distinguish the educated Filipino of today? I venture to suggest that the educated Filipino should first be distinguished by the power to do. The Oriental excels in reflective thinking; he is a philosopher. The Occidental is a doer; he manages things, men, and affairs. The Filipino of today needs more of this power to translate reflection into action, I believe that we are coming more and more to the conviction that no Filipino has the right to beconsidered educated unless he is prepared to take an active and useful part in the work,life, and progress of our country as well as in the progress of the world.

The power to do embraces the ability to produce enough to support oneself and to contribute to the economic development of the Philippines. Undoubtedly, a man may be, and often is, an efficient producer of economic goods and at the same time he may not be educated. But should we consider a man who is utterly unable to support himself and is an economic burden to the society in which he lives educated merely because he possesses the superficial graces of culture? I hope that no one will understand me as saying that the only sign of economic efficiency is the ability to produce material goods, for useful social participation may take the form of any of the valuable services rendered to society through such institutions as the home, the school, the church, and the government. The mother, for example, who prepares wholesome meals, takes good care of her children, and trains them in moral and right conduct at home — she renders efficientservice to the country as well as does the statesman or the captain of industry. I would notmake the power to do the final and only test of the educated Filipino: but I believe that inour present situation, it is fundamental and basic.

The educated Filipino, in the second place, should be distinguished not only by hisknowledge of the past and of current events in the world’s progress but also especially byhis knowledge of his race, his people, and his country, and his love of the truths and idealsthat our people have learned to cherish. Our character, our culture, and our national historyare the core of our national life and, consequently, of our education. I would not have theeducated Filipino ignore the culture and history of other lands, but can he afford to beignorant of the history and culture of his own country and yet call himself educated?

The educated Filipino, in third place, must have ingrained in his speech and conductthose elements that are everywhere recognized as accompaniments of culture andmorality, so that, possessing the capacity for self-entertainment and study, he may not beat the mercy of the pleasure of the senses or a burden to himself when alone.

There are, then, at least three characteristics which I believe to be theevidence of the educated Filipino — (1) the power to do, to support himself, andcontribute to the wealth of our people; (2) acquaintance with the world’s progress,especially with that of his race, people, and community, together with love of our bestideals and traditions; and (3) refined manners and moral conduct, as well as the power of growth.

The hands of the blacks, by Luis Bernardo Honwana. (2016, Sep 29). Retrieved from https://studymoose.com/the-hands-of-the-blacks-by-luis-bernardo-honwana-essay 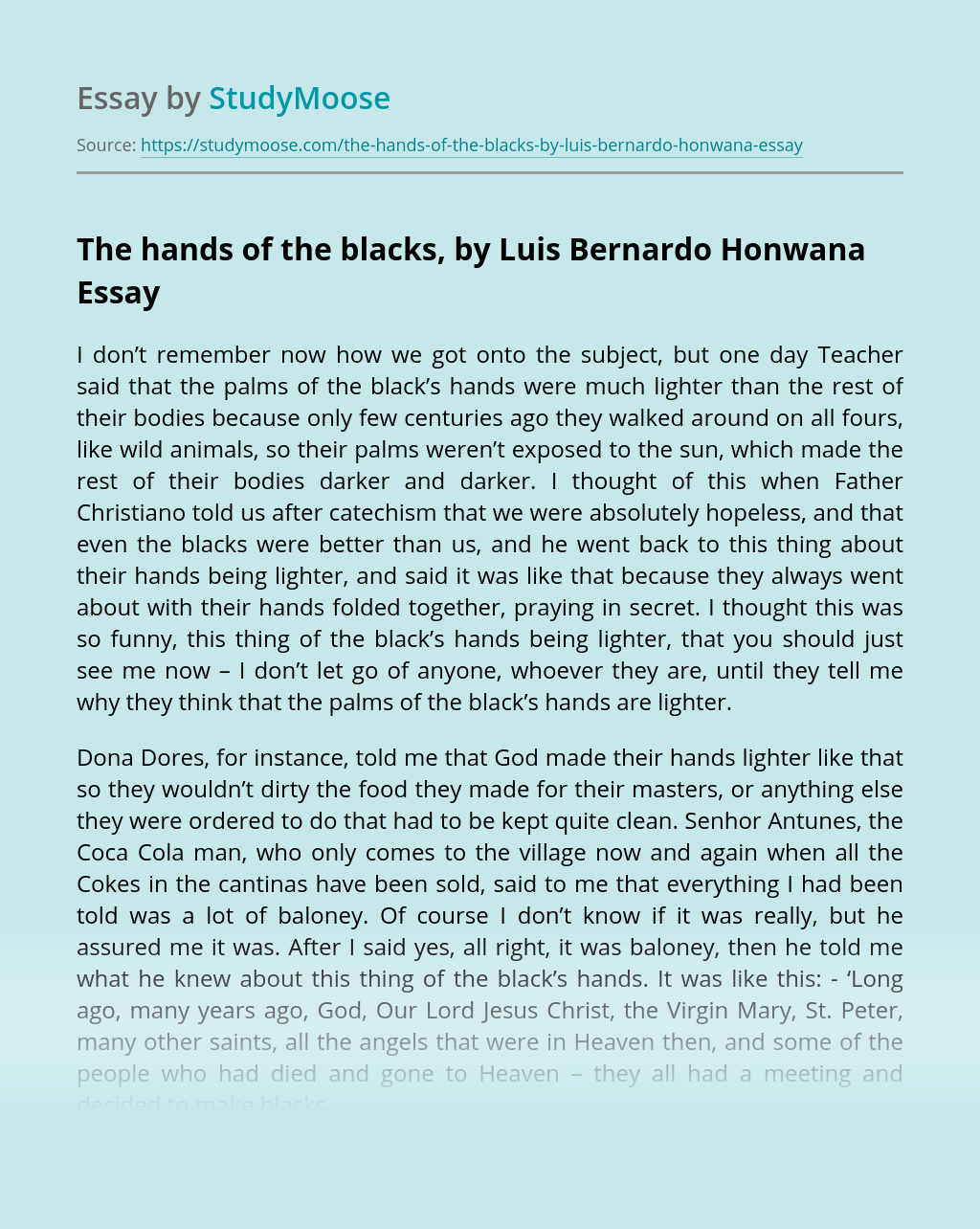