"The Glass Roses" by Alden Nowlan

There are various conflicts in the story, “The Glass Roses”, though the main and most significant one being of an internal conflict within the protagonist, Stephen, a “willowy fifteen-year-old” working in the pulp woods. The internal conflict occurs between his desires to fulfill his childhood dreams and those to become a “man”. Stephen is heavily influenced by his father, and longs to be like the other workers with their “ox-like shoulders”, but also does not want to leave his “childish” dreams and ideals behind.

Don't use plagiarized sources. Get your custom essay on
“ “The Glass Roses” by Alden Nowlan ”
Get custom paper
NEW! smart matching with writer

However, Leka, the Polack, shows Stephen how that being different and having your own ideals and ideas can be beautiful, like his mother’s glass roses though “There is not much room in the world for glass roses”. The conflict is solved however, when Stephen decides to become like his father and fit the stereotype of a man, perhaps because he does not want to disappoint his father, raising an important issue, “To what extent should a child conform to his parents’ expectations of him?” I think that it is through these conflicts that the author effectively demonstrates how heavily a person can be influenced by others, such as their parents.

The protagonist in the story, Stephen is a very dynamic character, as he learns much from his father and Leka while working in the pulp woods. In the beginning of the story, Stephen is unsure about who he wants to be. He tries to be like his father, endlessly felling trees, but is unable to leave his “childish” ideals and values, such as his “fascination with tales of far places.

” He learns to try and follow his own ideas and beliefs from Leka, who is different from the other men, but in the end decides to become like his father after seeing how he would be viewed in society, and by his father- “Them Wops and Bohunks and Polacks has got funny ideas. They ain’t our kinda people. You gotta watch them.”

In the story, the author effectively uses two of the characters to help develop the protagonist, Stephen, throughout the story. Stephen’s father, the foreman of the pulp cutting crew and the “huskiest and solemnest of them all”, perfectly fits the common stereotype for a “man” and is who Stephan looks up to. To help fuel the protagonist’s internal conflict, the author creates and uses the “Polack” as a character foil to Stephan’s father. The two characters are then used to help influence Stephan and resolve the conflict.

There is one main form of irony in the story, that being where Stephan longs to be like his father, a grown man, but wants to keep his “childish” ideals and values as well. This is an example of attitudinal irony because it occurs in the character’s thoughts and feelings; the character’s attitude.

"The Glass Roses" by Alden Nowlan. (2016, Jul 22). Retrieved from https://studymoose.com/the-glass-roses-by-alden-nowlan-essay 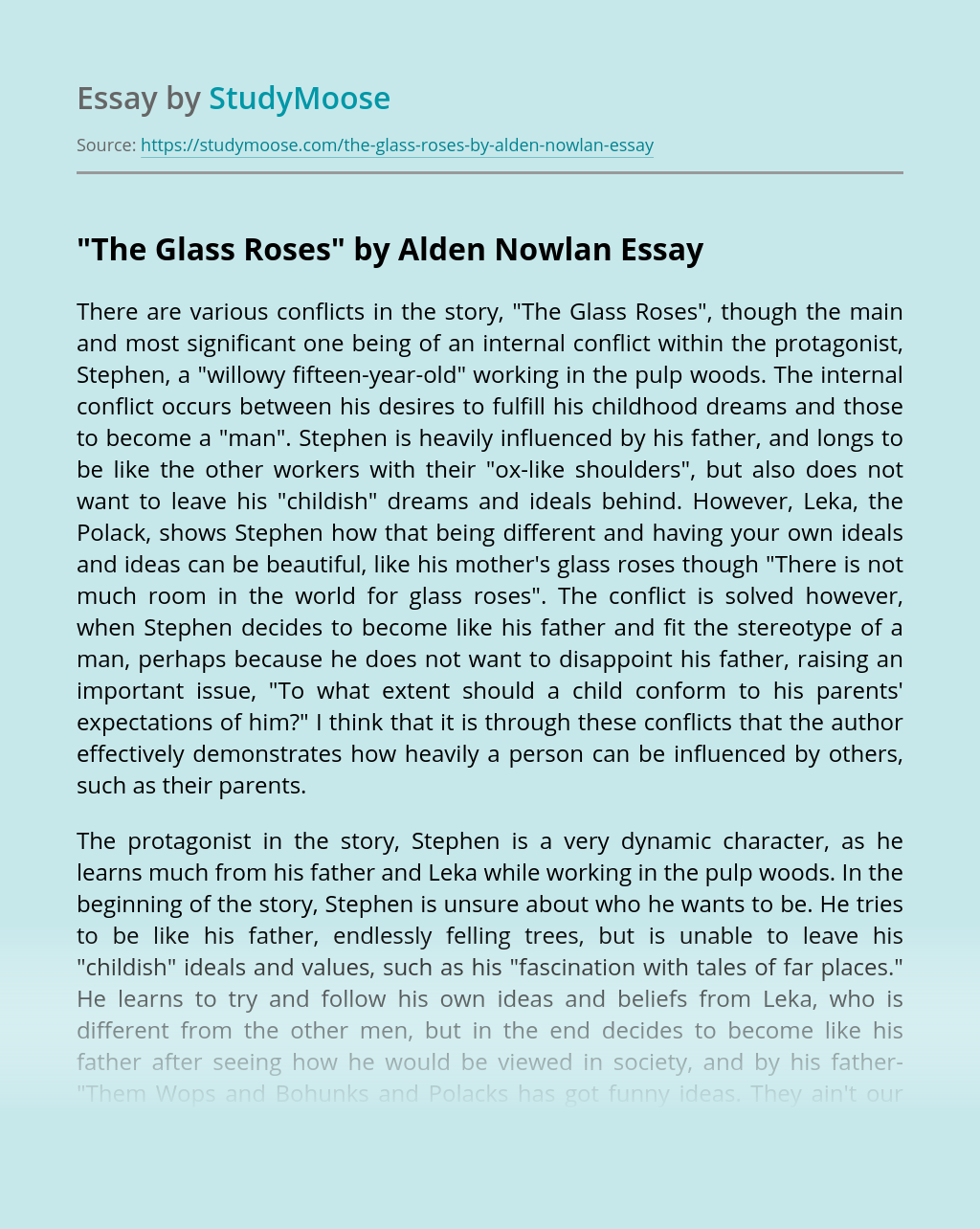