Abraham Lincoln’s “Gettysburg Address” and Pericles’ “Funeral Oration” are two of the most memorable speeches given throughout history. On November 19, 1863, Abraham Lincoln delivered this speech amongst the American Civil War as a way to bring honor to those who died during the Battle of Gettysburg. At the end of 431 BC, Pericles delivered his famous Funeral Oration, to honor the dead soldiers of the Peloponnesian War, during an annual public funeral. There are many similarities and differences that can be made between the two regarding their context and content.

Don't use plagiarized sources. Get your custom essay on
“ The Gettysburg Address and Pericles Funeral Oration ”
Get custom paper
NEW! smart matching with writer

In 431 BC, the end of the first year of the Peloponnesian War came. During the years of the war, there was an annual public funeral held to honor the Athenians who died. It was here that Pericles delivered his “Funeral Oration”. (Pericles, Funeral Oration, 431BC.) While giving his speech, Pericles managed to not only honor the dead, but to also inspire the living by reminding them of the accomplishments that there Athenian ancestors have created.

Proficient in: The Gettysburg Address

Despite the monumental time gap in between both of these speeches, there are strong similarities that can be made between the two.

The “Gettysburg Address” was given during the midst of the American Civil War. It was given to dedicate a national cemetery and to help honor the dead Union Soldiers of the Battle of Gettysburg. (The Gettysburg Address.) Pericles delivered his Funeral Oration at the end of the first year of the Peloponnesian War, which would last for 26 more years. His speech was given as part of an annual event to honor the dead Athenians who fought in that war. While both of these speeches were supposed to strictly speak about the dead, they both managed to instead inspire those who are living and attempt to have them live up to the standards that those who died have set.

While there are strong similarities between both of these speeches, there are some differences between both of them in context and in content. Speeches given during the time of both Lincoln and Pericles were known to be very long. However, Lincoln’s speech was just over two minutes, while Pericles’ speech was eleven paragraphs. When Lincoln presented his “Gettysburg Address”, it was part of a one-time event, while Pericles delivered his speech in an annual public funeral.

In his “Funeral Oration”, Pericles speaks about the Athenian life and their accomplishments as a way of inspiring those who are living and to remind them of what the dead had fought for. (Ancient History Sourcebook: Thucydides (c.460/455-c.399 BCE): Pericles’ Funeral Oration from the Peloponnesian War (Book 2.34-46).) In the “Gettysburg Address”, Lincoln also manages to inspire his people, but in a different way instead inspires his people by reminding them that there is a lot that they still need to do if they want to live in an equal nation.

The “Gettysburg Address” and Pericles’ “Funeral Oration” were two similar speeches given at vastly different times in history. Abraham Lincoln delivered the “Gettysburg Address” in the middle of the American Civil War, during a dedication to the dead Union soldiers of the Battle of Gettysburg. More than two thousand years earlier, Pericles delivered his Funeral Oration during a public funeral held for the dead Athenians of the Peloponnesian War. Both of these speeches managed to not only honor those who died, but were able to do so in innovative ways. They both inspired those who were living to continue to fight for their causes. 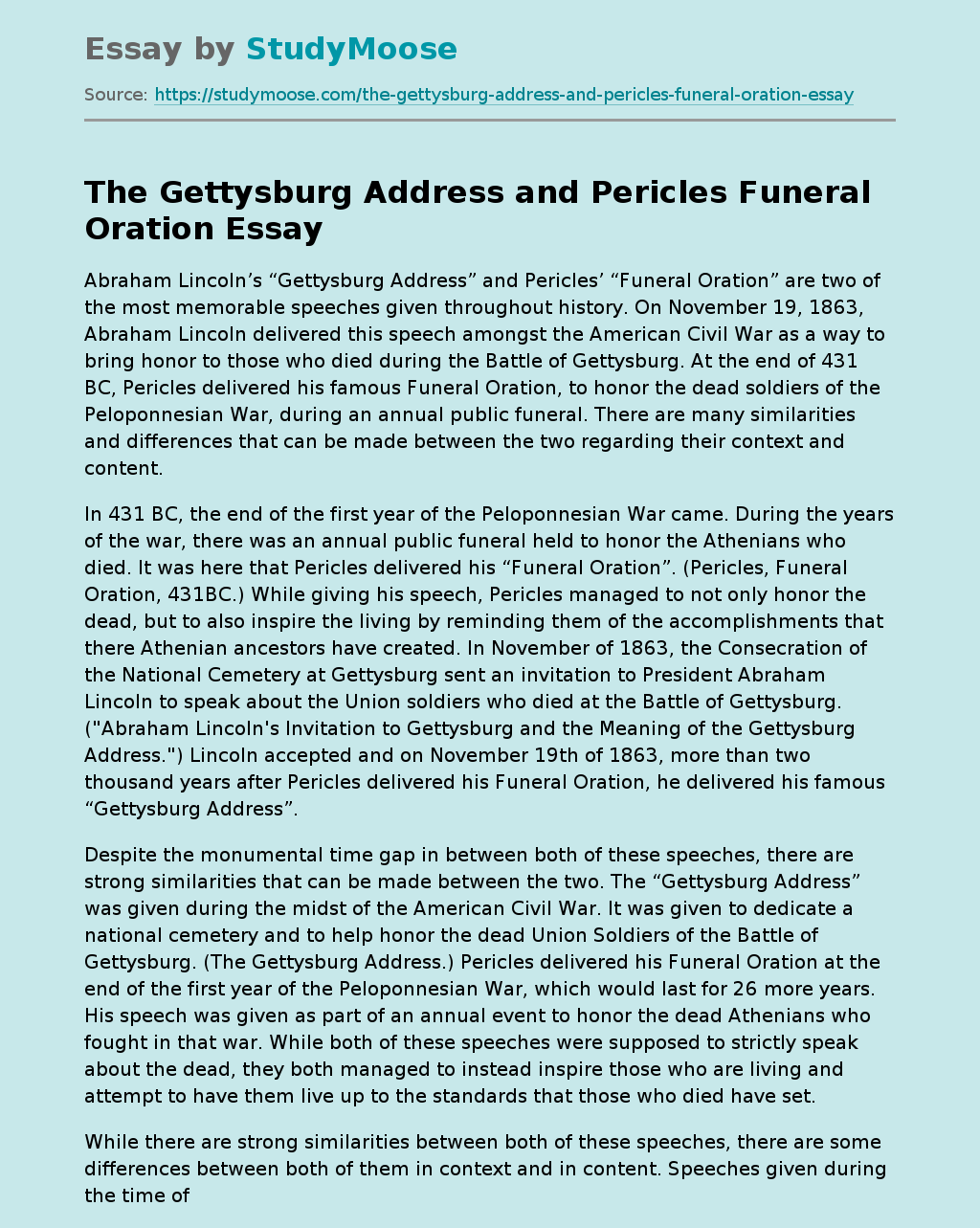