The Evolution of Strategy at Procter and Gamble

The Evolution of Strategy

Don't use plagiarized sources. Get your custom essay on
“ The Evolution of Strategy at Procter and Gamble ”
Get custom paper
NEW! smart matching with writer

Management Focus: The Evolution of Strategy at Procter & Gamble

Throughout this expansion, the company maintained all product development at its Cincinnati, Ohio headquarters, while each subsidiary took on the responsibility for manufacturing, marketing, and distributing the products. Procter & Gamble shifted its strategy in the 1990s, closing several foreign locations and moving to a more regional approach to global markets. More recently, the company implemented “Organization 2005”, a business unit approach whereby different units are entirely responsible for generating profits for a product group.

Discussion of this feature can begin with the following questions:

1. Discuss the evolution of Procter & Gamble’s strategy. Do you think Procter & Gamble was reactive or proactive in its approach to strategy in the late 1990s and early 2000s?

Discussion Points: Many students will probably suggest that Procter & Gamble took a reactive approach to its strategy in the early 1990s, but was more proactive in the late 1990s and early 2000s. The company’s initial reorganization was a reaction to a changing marketplace and sluggish profits, however, when it became apparent that the reorganization attempt was not really fixing the problems that existed, the company embarked on a new strategy. This time, rather than simply trying to adjust its existing strategy as the company had done in 1993, Procter & Gamble completely dismantled the structure that had been in place for a quarter of a century and reorganized as a company ready to operate in a global marketplace.

Discussion Points: Numerous factors prompted Procter & Gamble to change its strategy. Because of its country-by-country approach to the market, the company had extensive duplication of manufacturing, marketing, and administrative facilities that were driving up costs. In addition, the retailers that the company relied on were operating globally and demanding deeper discounts from Procter & Gamble. With its new strategy, the company has eliminated these problems. Now, Procter & Gamble’s competitors are facing many of the same challenges. Some students will probably suggest that a key element that competitors can learn from Procter & Gamble’s experiences is that operating in a global market is significantly different from selling internationally to individual markets.

3. How would you characterize Procter & Gamble’s current strategy? What challenges do you foresee with the new strategy?

Discussion Points: Students will probably suggest that Procter & Gamble is trying to take a transnational approach to markets. The company has reorganized into business units so that each unit is responsible for its own profits. Each unit has been directed to develop global brands where possible, and keep costs low. While this new approach eliminates many of the problems facing the company under its old structure, it does introduce a new challenge in that there is little communication between business units which effectively minimizes the possibility of cross-unit learning and information sharing. So far, the new strategy seems to be working. Profits at Proctor & Gamble were up for the time period 2003-2007. Interestingly, the company’s competitors – Kimberly-Clark and Colgate-Palmolive reported more mixed results for the same time period.

Lecture Note: Unilever, a competitor to Proctor& Gamble, has recently made changes to its strategy that could threaten Proctor & Gamble’s success. To extend this discussion consider {http://www.businessweek.com/innovate/content/mar2008/id2008035_909480.htm?chan=search}.

The Evolution of Strategy at Procter and Gamble. (2016, Sep 30). Retrieved from http://studymoose.com/the-evolution-of-strategy-at-procter-and-gamble-essay 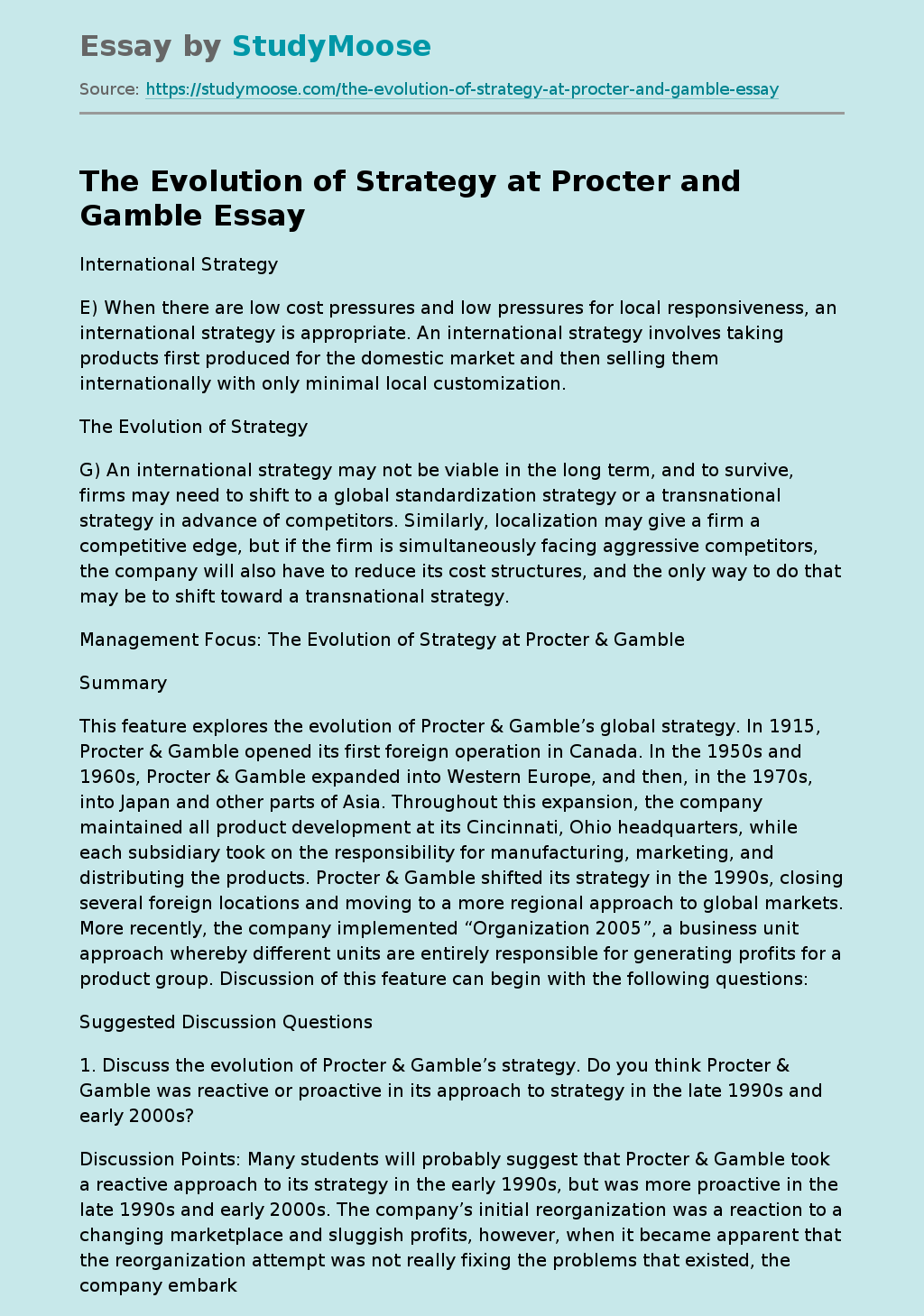