The Effects Of Internet Addiction

THE PROBLEM AND ITS BACKGROUND

Don't use plagiarized sources. Get your custom essay on
“ The Effects Of Internet Addiction ”
Get custom paper
NEW! smart matching with writer

Because of the internet there are many links/connection to everyone like facebook, twitter, and other social sites that is open to the public. This problem may cause bad effects or sometimes good effects especially on the discipline of the person but most of all bad and serious problems may come.

Internet addiction or abusing the use of internet must be prevented to stop from having social and emotional problems because it may affect how they live. Internet addiction can also be a mental problem or being a health problem because of disregarding one’s health and having no self-control or lack of control in using too much in the internet. Internet abuse is the one or the most problems of the young people and can also ruin or not ruin their life. 8

1.2 Statement of the Problem

A person becomes compulsively dependent upon a particular kind of stimulation to the point where obtaining a steady supply of that stimulation becomes the sole and central focus of their lives.

The addict increasingly neglects his work duties, relationships and ultimately even his health in his drive to remain stimulated. A related phenomenon, withdrawal, can also occur, wherein the addicted person comes to be dependent upon their source of stimulation and experiences dramatically unpleasant reactions when he goes without it, (According to Bursten, Julia &Dombeck, Mark, Ph.D.“Introduction to Internet Addiction”easybib.com,Apr 16th 2004). Despite the agreement that excessive internet use is a key symptom, no one seems able to define exactly how much computer time counts as excessive. While guidelines suggest no more than two hours of screen time per day, this is unrealistic for people who use computers for work or study, (According to Hartney, Elizabeth PhD. “Symptoms of Internet Addiction”addictions.about.com, September 03, 2013).

Interactive communication applications such as chat rooms, instant messaging, e-mail, and online games have most commonly been associated with Internet addiction among youth, (According to Guan, Shu-Sha Angie, Subrahmanyam, Kaveri, “Youth Internet Use: Risks and Opportunities”, medscape.com,2009).Out of sight of parents, some college kids further cave to online escapism or use gaming to acquire resources in-game and sell them in the real world. In a recent case. Several studies have linked voluntary and excessive online use to depression, poor school performance, increased irritability and more impulsiveness to go online (confounding addicts’ efforts, if they want to at all, to stop pouring excessive time into online games).

Kids spend an increasing fraction of their formative years online, and it is a habit they dutifully carry into adulthood. Under the right circumstances, however, a love affair with the Internet may spiral out of control and even become an addiction. Loosely defined, addiction is a disease of the brain that compels someone to obsess over, obtain and abuse something, despite unpleasant health or social effects. And “internet addiction” definitions run the gamut, but most researchers similarly describe it as excessive (even obsessive) Internet use that interferes with the rhythm of daily life. (According to Mosher, Dave, “Does Addictive Internet Use Restructure the Brain?”, scientificamerican.com, June 17, 2011).

1.3 Significance of the Study

Computer plays a big role or part in our daily lives. It helps us to make things easier. Together with the computer is the internet. They help us with the work. One clicks then copy-paste. As I said, they make things easy for us. Internet has a big part in our lives. Internet helps us to make our homework, and projects. One of the search engines is the Google. We can find the information or things here. We just need an internet connection to access the sites you want to see. Internet is a big help for us humans. As they play a big role in our lives, there are also disadvantages in using internet. We do not see these disadvantages because we are so addicted to it. One of the biggest disadvantages of using the internet addiction. Why? Because we are being slaves. We do not want to search for books whenever we have homeworks or research works.

We always use the internet in doing these things. We are so addicted in the internet. In such a point that we visit the sites that we should not see or inappropriate for the youth especially the children. Second effect is, plagiarism. Sometimes, when we are told to write for something, some of us is surfing the internet the copy and paste, that’s it. How easy it is for us to finish such a thing using the internet other than using our minds. Third, is the cyber bullying some of us are posting words and photos that are inappropriate for social media like facebook, and twitter. These sites are now used for cyber bullying. We forgot the essence of social media sites are sub alternative for communication with the people around us. Those are the 2 bigger effects of the internet to the large number of youth’s today. We are being slaves of people around us. We should always think that using internet can lead us to addiction. We should always put in our minds that we should internet for things we really need not just for fun.

1.4 Scope and Delimitation of the Study

This part will give knowledge about the meaning or definition of some words used in the study: Internet – it is a global system to link several billions of devices worldwide Addiction – it is a condition of being addicted to a thing, or activity Cyber Bullying – a kind of bullying through social media or through the use of internet Plagiarism – owning or taking someone’s work

Effects – the result of an action
Gamut – scope of something
Communication – a connection between people
Behavior – the way in which one acts
Youth – refers to young people considered as a group
Resources: Wikipedia.com
For more details you can use our resources to know the definition of the term that you are finding

The Effects Of Internet Addiction. (2016, Sep 17). Retrieved from https://studymoose.com/the-effects-of-internet-addiction-essay 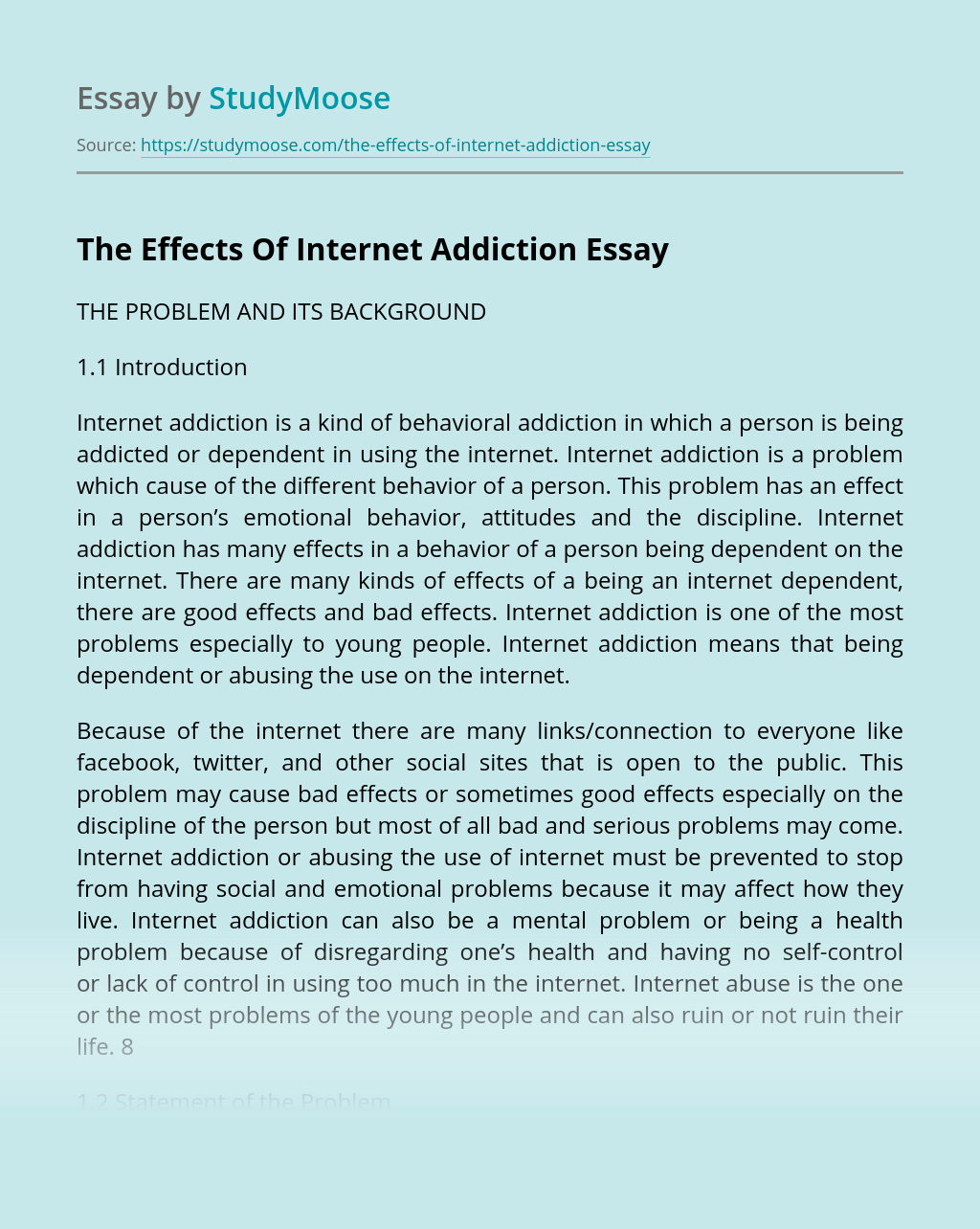