This film portrays what happens to one member of the medical establishment when he faces problems normally confronted only by patients. Dr. Jack MacKee, a cool, self-centered surgeon who is in total control of his successful life until he is diagnosed as having cancer of the throat. Then he finds himself subject to the negligence, indifference, strict regulations, and humiliations which many have experienced in hospitals. Ignoring his wife, Jack seeks moral support from a woman dying of a brain tumor.

Turn in your highest-quality paper
Get a qualified writer to help you with
“ The Doctor(Movie) My Essay ”
Get high-quality paper
NEW! AI matching with writers

June Ellis portrays this character as a healer who restores Jack to life — and to a new vision of what it means to be a doctor. The film gives us a fresh appreciation of the dynamic interplay between mind, body, and soul in the art of healing. The Doctor immediately lets you know that it’s going to be about how surgeons really operate (in all senses of the word). Jack is a great doctor, yet years of cutting into patients, of treating human beings like meat, have coarsened him.

He’s acquired so much clinical distance that it now rules his personality. He no longer sees his patients as real, even as he’s saving their lives; he no longer sees his and son at all. More than perhaps any movie before it, The Doctor captures the styles and attitudes of contemporary physicians, especially surgeons: the cool scientific bravado, the gallows humor, the abstracted sense of ”caring” that allows some doctors to view their patients as subtly inferior beings.

As Jack and his surgeon buddies barrel down the hall, forming a kind of superstar boys’ club, The Doctor reveals how compassion and ego can jockey for control of a physician’s soul. Early on, fate turns the tables on Jack. He is diagnosed with throat cancer and told that there’s an 80 percent chance it can be cured with radiation therapy. If that fails, he’ll have to go under the knife and risk losing his voice. The Doctor is about how Jack regains his compassion through his brush with disaster.

This film is one of the most honest and understated sentimental movies in years. It’s about a man who has stopped responding to what’s in front of him, and about how he slowly opens his eyes. Jack suddenly finds himself in the lowly position of being…a patient. As he discovers, and as anyone who has ever been hospitalized can attest, a modern medical center is at once the most maddening and the most comically democratic of institutions. With a few exceptions (say, U.S. Presidents), everyone is subject to the same bureaucratic inefficiency, the same wheelchair when you can walk perfectly well, the same cheery impersonality when the doctors make their rounds. Haines directs with a spry, delicate touch, capturing the full comic ghastliness of the experience.

Though it’s likely that a surgeon as prominent as Jack would get preferential treatment in certain quarters, his outrage at being reduced to one of the herd rings devastatingly true; it anchors the entire drama. The cruel irony of Jack’s ordeal becomes an extension of how most of us feel if a serious illness strikes — that we’ve been made the plaything of some prankster god. The Doctor is far from flawless. When Jack meets a fellow patient, June (Elizabeth Perkins), who is suffering from an advanced brain tumor, the two talk, bond, and take a mystical trip to the desert. We’re to understand that Jack can no longer open up to his wife. Yet even if that’s true, the marriage needs to be sketched in more. The vibrant Christine Lahti is saddled with a drastically underwritten part; her character just seems like a well-meaning (and slightly shrill) noodge. And June doesn’t have much to do except teach Jack that Life Is Worth Living. Still, if there are moments when The Doctor is too pat, Hurt’s performance is fully alive. He brings an inquisitive fear and yearning to even the most under imagined scenes; by the end, we feel we’ve been through a highly specific journey of emotional discovery. The Doctor is that rare good thing, a weeper that respects its audience. 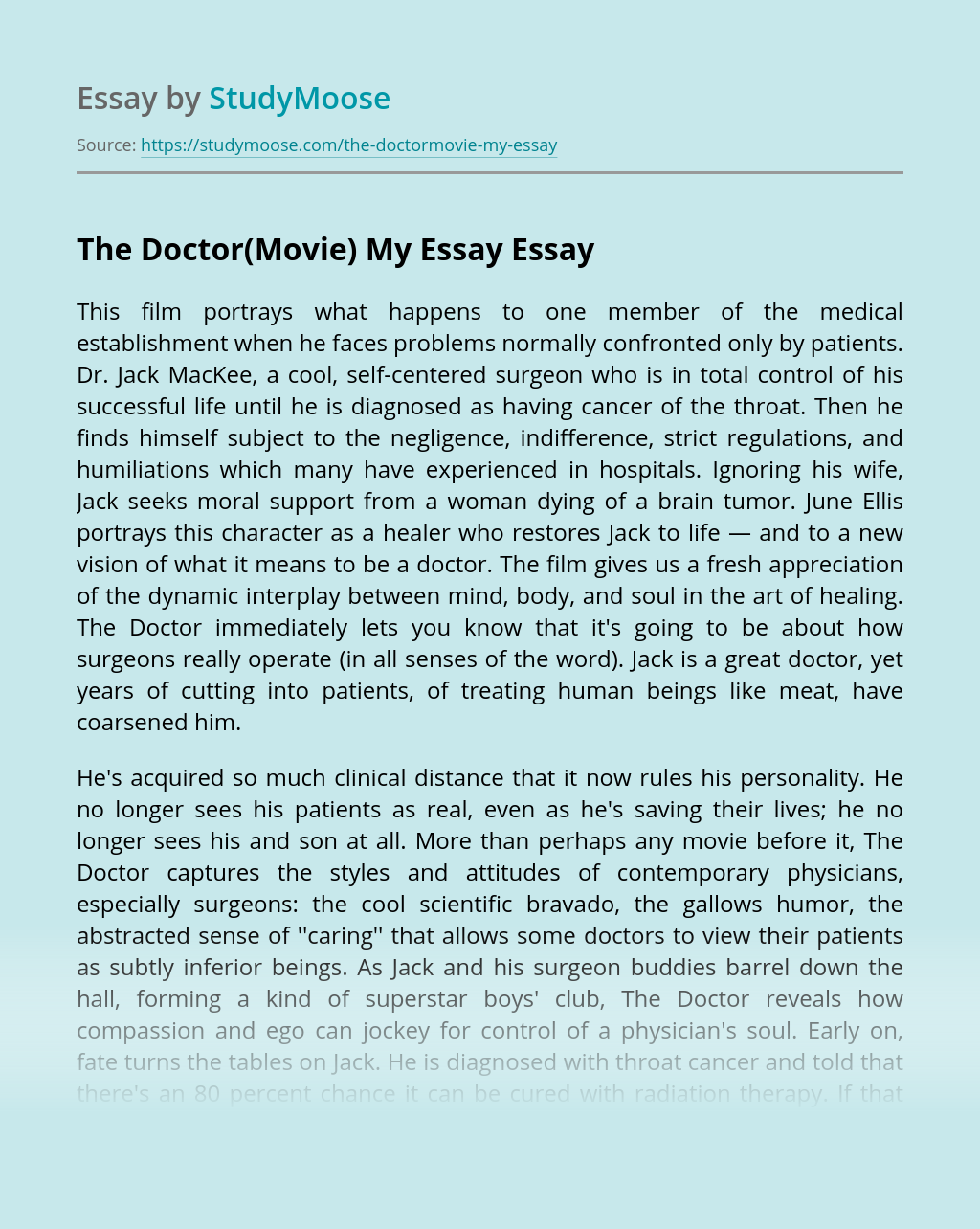 Turn in your highest-quality paper
Get a qualified writer to help you with
“ The Doctor(Movie) My Essay ”
Get high-quality paper
Helping students since 2015
Stay Safe, Stay Original