In this essay you will find a detailed film reflection on the Corporation. The award winning documentary was released in 2004 by Mark Achbar, Jennifer Abbott & Joel Bakan.

When i started watching the documentary i was a bit bored but it changed rapidly and i was glued to my computer for the entire documentary, despite it’s length. A favourite scene or scene that emotionally touch me the most is herefore hard to choose.

Don't use plagiarized sources.
Get Your Custom Essay on The Corporation Film Just from $13,9/Page

I found many scenes shocking and very interesting to only choose one.

Two scenes that i wanna talk about where the scenes first about the undercover messages and secondly about the story of milk.

The scene about undercover messages was very interesting because i never heard about it before. We all know about product placement but i don’t think many people no about real life product placement. When i saw that scene it was really scary to see how far corporates go to sell their products.

Knowing that there are people like that trying to sell products in that form is really weird.

Another scene that shocked me was about the reporters Steve Wilson and Jane Akre. How they were being threated by their own boss (FOX) was interesting to see. The power that a corporate like Monsanto has is scaring. It showed for me just one example of corporate control.

These examples above are just a couple out of dozens of great scenes i could have picked like a company owning all the water in Bolivia even rain water, corporates profeting from war like Ford and Coca Cola (Fanta being a nazi drink) and corporates using laws created for former slaves(14th Amendment).

I completely agree with the documentary. I am very happy that I got to watch this documentary even though it was really long. I already knew a lot out of the documentary but it was refreshing to see new perspectives a new ways of looking at the power of corporates.

I didn’t really learned anything new from the documentary. All the things you see in the documentary are not new items. Knowing that companies profit from war for example is not new, the shown examples are new to me like Fanta for example, The only thing that was new to me was the way the try to sell products. The real life product placement was very interesting to see and also the way they are trying to manipulate kids for their products was interesting.

Determining the roots for the ethical issues is really hard. Ethical issues goes back decades which is also shown with the IBM example during the second world war. The ethical aspect of corporates has become bigger in recent years I think. But maybe that’s just me. With documentary like this and different tv shows the ethical aspect has been on the radar more and people starting to realize more and more what is really going on in the corporate world, for example occupy. So determining what the roots are is really difficult to answer.

When you see a documentary so focused on the negative side obviously it is not objectively. It shows on side and not the other. Although I fully agree with the opinions of the makers you do have to be critical and realise that this is just one side of the story. Blindly trusting one side I think is never a good thing, always be open to new perspectives. 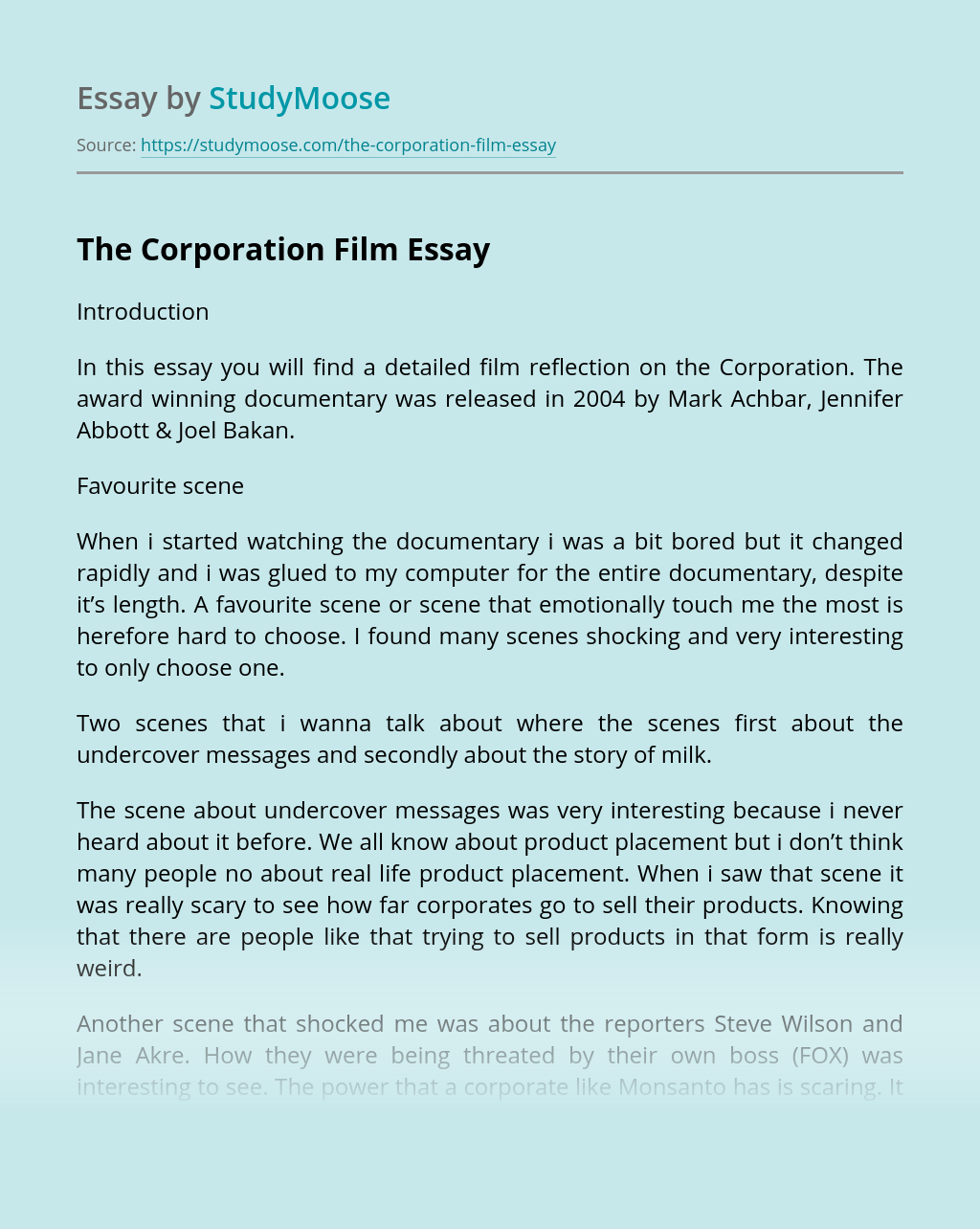 Some Highlights From the Food, Inc. Documentary

Rate this post The 2008 documentary Food Inc focuses on corporate farming in the United States. It poses questions about the unsustainability of cultural practices that are both harmful to the environment, the animals, and the consumer. These practices are the cornerstones of corporations such as Monsanto, which dominates the agricultural business in the United...

Rate this post “No more lessons. I have a question, though. Those two foul shots at the end of the game… did you miss them or did you miss them? ” This is the biggest question of the whole movie and also a huge part of the movie. Finding Forrester was a movie about a...

Rate this post In todays world changes on any Job can basically have pros and cons. Exxon mission statement states “Exxon Mobil Corporation is committed to being the world’s premier petroleum and petrochemical company. To that end, we must continuously achieve superior financial and operating results while simultaneously adhering to high ethical standards. ” To...

Rate this post Abstract Aaron Salomon was a successful leather merchant who specialized in manufacturing leather boots. For many years he ran his business as a sole trader. By 1892, his sons had become interested in taking part in the business. Salomon decided to incorporate his business as a Limited Company, Salomon & Co. Ltd.At...

Rate this post To further improve our country’s economy competitiveness, to improve the ease of doing business in the country, to promote the advantages brought to us by entrepreneurial program and business climate, to simplify the procedures and requirements in formulating and organizing businesses, to assure the safety of every corporator and entrepreneur in the...

Rate this post Introduction You can’t hide from it even if you’re in space. The melting cheese, the chippy fries, the double cheese burger and a large coke. You love McDonalds, don’t you? Well amazingly if you do, this shock-doc will totally change the way you think. Do you know that McDonalds is mc-killing you?...

Rate this post Target Corporation is the choice for reference organization. Target Corporation is a retailing business, which started from a dry goods store in 1903 named after George D. Dayton, the founder of Goodfellows. In 1962, the Dayton Company which was eventually established half a century ago, opened a Target store based on the...