The climax of 'The Crucible'

In the quote above, he has not committed a guilty act but the last phrase ‘swings pot into fireplace’ makes it seem guilty because of the way he acts. He in-avertedly tried to please her in order to please him because he knows, that is her intention. We see that it is important for Elizabeth to please Proctor and how important it is for her to feel appreciated ‘she sits and watches him taste it… blushing with pleasure: I took great care… ‘ the conversation between the couple at the start of the Act comes across to the audience as being awkward and idle, to fill in the silence.

Don't use plagiarized sources.
Get Your Custom Essay on The climax of ‘The Crucible’ Just from $13,9/Page

This is a reflection of the tension in the room. As their conversation moves along, it slowly becomes heated, due to the fact that his affair tarnished their relationship. Miller used ‘The Crucible’ as a metaphor for Elizabeth’s and John’s relationship. The pure element to be extracted is their love for one another leaving behind the impurities – lies and guilt.

The affair with Abigail puts up a wall between Proctor and his wife ‘a sense of their separation arises’.

Mention of Abigail provokes arguments between the couple and because the guilt Proctor heaps upon himself is already a great burden, having Elizabeth’s judgement made it too much to bear ‘your justice would freeze beer’. Although Elizabeth is trying to repair the damage in her relationship wit John, her suspicion remains and she still hurts – this puts more strain on their relationship. John Proctor’s vivid awareness of this provokes his anger towards Elizabeth but more towards himself because of the immense guilt he feels for hurting someone he cares deeply about.

The guilt takes an impact on his way of reasoning and the way he acts. Having Elizabeth’s judgement is too painful for John ‘you will not judge me more’ this is because he knows he earned and deserves her judgement but this could be because he knows he will be judged by God; as this is puritan belief. He feels the judgement is too great. John Proctor is angry because Elizabeth will not forget his misdeeds and therefore he can forget it ‘you forget nothing’ and forgive nothing’.

This makes him believe he doesn’t have her forgiveness but as an audience, her still being in that marriage signifies some shred of forgiveness, if not total. The theme of vengeance comes into place when Abigail accuses Elizabeth of witchcraft. There is dramatic irony here because everyone in Salem has come to regard her as a saint while the audience knows the truth. I believe Abigail accused Elizabeth of witchcraft in hope of replacing her but more also to spite her and hurt John Proctor. Abigail holds the power of fear over the people of Salem.

She holds this power over the judges because they fear the unknown and over the people because they fear for their lives which make them admit to a crime they are innocent of. The fear of dying leaves them no choice but to confess to witchcraft ‘and, why not, if they must hang for denying it? ‘ Here proctor sees through these confessions because he is aware of the truth. This can be linked to modern day because fear is a powerful weapon and can be used to force anyone to do almost anything.

The climax of ‘The Crucible’. (2017, Oct 14). Retrieved from https://studymoose.com/the-climax-of-the-crucible-essay 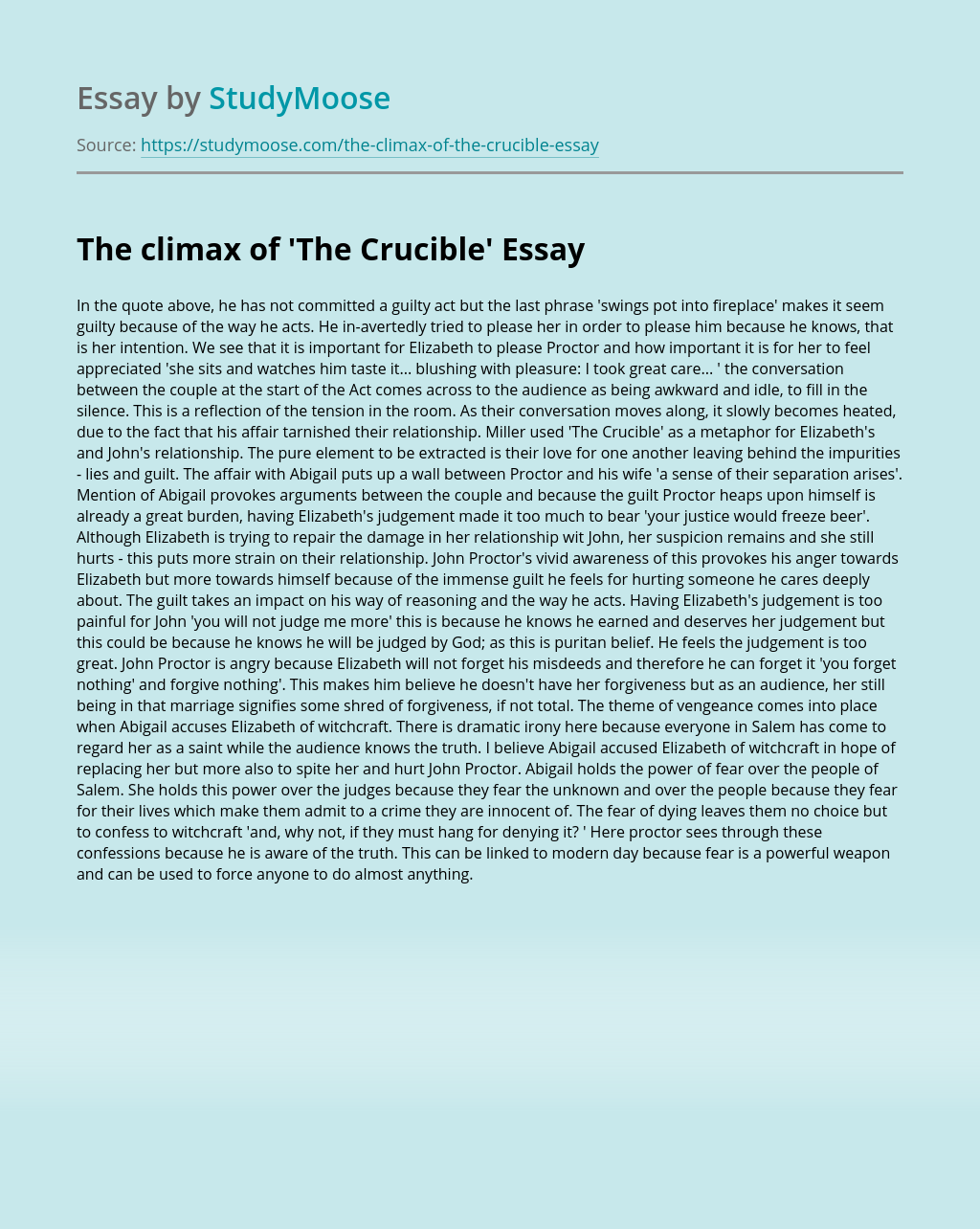 Rate this post “I am one of the few honest people that I have ever known”. Discuss. Nick Carraway, the narrator of the great American novel The Great Gatsby written by F. Scott Fitzgerald, is often heralded as one of the greatest narrators of all time. However, whether Nick was a reliable narrator is an...

Rate this post Personal Reflection on Anne Frank’s House I chose to compose an individual reflection on the Anne Frank’s House traveler attraction in Amsterdam because I have 2 children. As a parent, I desire the very best for them and most importantly, their safety. I would do the exact thing what Anne’s daddy had...

Get Essay
Animal Farm: The Meaning of Equality

Rate this post In George Orwell’s Animal Farm, he examines the impact of communism and the post-war anxiety of World War II. Orwell uses allegories to thoroughly explain the pain and worry following the clash between countries. He uses farm animals and a farm to represent the major events and figures in the time of...

Rate this post Where do the witches say they will meet macbeth? Upon the heath-uncultivated plains How do the witches speak? In rhyme,each witch has something to say three times,paradox Paradox statement that seems to contradict itself or to be impossible, but is actually true What is the meaning of “Fair is Foul,Foul is Fair”...