Intolerance from The Crucible

Ayn Rand once said “A single lie destroys a whole reputation of integrity. It means that a lie sadly has enough power to cause corruption in a society. It also suggests that a lie perhaps be strong enough to destroy even a high ranking person from a society. If you tolerate lies dominating people around you, you’ll eventually be a victim of them.

Two literature works that explain this quote are Author Miller’s play, The Crucible, which takes place in a Puritan town named Salem in the state of Massachusetts during the year of 1692.

Both literatures works The Crucible and “The Hangman” have Intolerance as one of the main themes in common.

Intolerance takes place in “The Hangman”. The Hangman gives the townsfolk a severe test, which is the hang trial and see how the townsfolk will address it. The Hangman nervously arrives in the reader’s unnamed town, and built his frame. The town folks are wondering who the criminal is and what the crimes are. On the very first day he hanged a man who came from another land.

The townsfolk who gathered in the courthouse square, leaves without saying anything because they don’t care for the foreigner. The townsfolk believed that the frame would be gone by the next day, but it didn’t because they neglected the first hanging. Now the Hangman doesn’t even bother to do so, because the townsfolk showed him they don’t really care. For the reason of that, the townsfolk become such easy targets for the hangman, because of his intolerant attitude. And we wondered, whenever we had the time,

Who the criminal, what the crime
That the Hangman judged with the yellow twist
of knotted hemp in his busy fist.

And he stepped down, and laid his hand
on a man who came from another land.
And we breathed again, for another’s grief
At the Hangman’s hand was our relief Maurice Ogden

Later on The Hangman executed an infidel Jew, then a dark skin one, both lived in the town. The Hangman’s intolerant personality combined with the townsfolk ignorance lead the hangman to executing the townsfolk in a large amount, which happens clearly because of ignorance. Those who wander why were hanged. This causes the town’s residents to become fearful. Then more and more were hanging. Finally even the speaker of the poem was hanged because of his ignorant personality. This means anyone who neglect either a party or someone dominate them will eventually suffer of it. The presence of intolerance in “The Hangman” is something that the town’s resident should be motivated to take away from the Hangman, unfortunately they was unable to do that cause of their fears and the Hangman’s intolerant test. “Dead!” I answered, and amiably

“Murdered,” the Hangman corrected me.
“First the alien then the Jew.
I did no more than you let me do.”

Beneath the beam that blocked the sky
none before stood so alone as I.
The Hangman then strapped me…with no voice there
to cry “Stay!” for me in the empty square. Maurice Ogden

Intolerance takes place in The Crucible It all began with a Negro slave named Tituba, combined with a group of daft girls goes dancing in the forest. In a Puritan town, anything that’s look unfamiliar to the Bible consider as something against it. While dancing in the forest, the girls ironically caught, by the town’s minister, Reverend Parris. On the following morning both Parris’s and the Putnam’s daughter were unable to wake up. The Villagers gathers at the minister’s house and quickly witchcraft rumor invade the town.

Abigail what was a part of the girls dancing and who is Parris’s niece, warns the others girls to not to admit what they were doing in the forest. She even menace them she could kill them if they do so. Parris is paranoid; he believes that his congregation should not lift a finger without his permission when church is in motion. He thinks of nothing to do but to put his slave under pressure, because he think that Totuba might do witchcraft on his daughter, Tituba says to Parris “My Betty be hearty soon.” (Miller 8) This quotation shows that Intolerance has taken place in The Crucible Because Parris is don’t want his daughter to die, questioning and punishing Tituba is a good way to be aware of what actually happened in the forest.

Another way in which intolerance has taken place in The Crucible is when Tituba fearfully accuses several town folks of reading the devil book. Abigail joins her revealing that she has seen many women with the devil. Betty and the other girls joining them as well, and they start pointing their finger on people. Abigail says “I want to open myself. I want the light of God, I want the sweet love of Jesus! I kiss his hand. I saw Good with the Devil! I saw Goody Osborn with the devil! I saw Bishop with the Devil.” (Miller 48) This quotation tells that she is showing the villagers that she want to be a better Puritan, she want to show the authorities that she is not a witch indeed she is. All of her accusers were hanged by the end of the story, Except Sarah Good who confessed right away. The fact that they hanged the accusers shows zero tolerance for witchcraft, they hanged the accusers because a puritan society does not tolerate witchcraft and that morality is obviously traditional.

Another way in which intolerance has taking place in The Crucible is when Abigail who had an affair with John Proctor profits the witch trial occasion to accuse John’s wife of witchcraft so she could win it all. When Elizabeth name had been called in court john reveal that He had an affair with Abigail to test John’s claim judge Danforth approached Elizabeth and ask her if Proctor had been unfaithful to her, she lies to Proctor’s honor and judge Danforth denounces Proctor as a liar. Abigail herself forced Proctor’s servant to accuse him of being a witch, and she who is already afraid of her does so.

Proctor says to Mary Warren “Do that which is good and, no harm shall come to thee.”(Miller 95) This quotation shows how Proctor is praying his servant to tell the truth; although she has great conscious she doesn’t do so because she is afraid that Abigail can attack her in her sleep. Proctor is rages not only against the court but also her, and now proctor is arrested. This suggest intolerance because, if intolerance wasn’t present they would have listen to Proctor’s argument too which have great integrity in the town, but because of intolerance they’ll hang him as any other accusers if he do not confess of witchcraft.

In brief, both the poem, and the play speaks of intolerance, although “The Hangman” is mostly based on ignorance. It’s clearly has shown by the beginning of the poem that the townsfolk shows that they would not tolerate the Hangman to kill anybody in the town, but furthermore they ignore the Hangman, which they shouldn’t do because the greatest ignorance is to reject something you don’t know. They play, The Crucible shows that Salem won’t corrupt if there was tolerance, unfortunately it does, and later on the Judges discovered that they weren’t doing the correct thing but it was way too late due to the number on people died.

Intolerance from The Crucible. (2016, Oct 03). Retrieved from http://studymoose.com/intolerance-from-the-crucible-essay 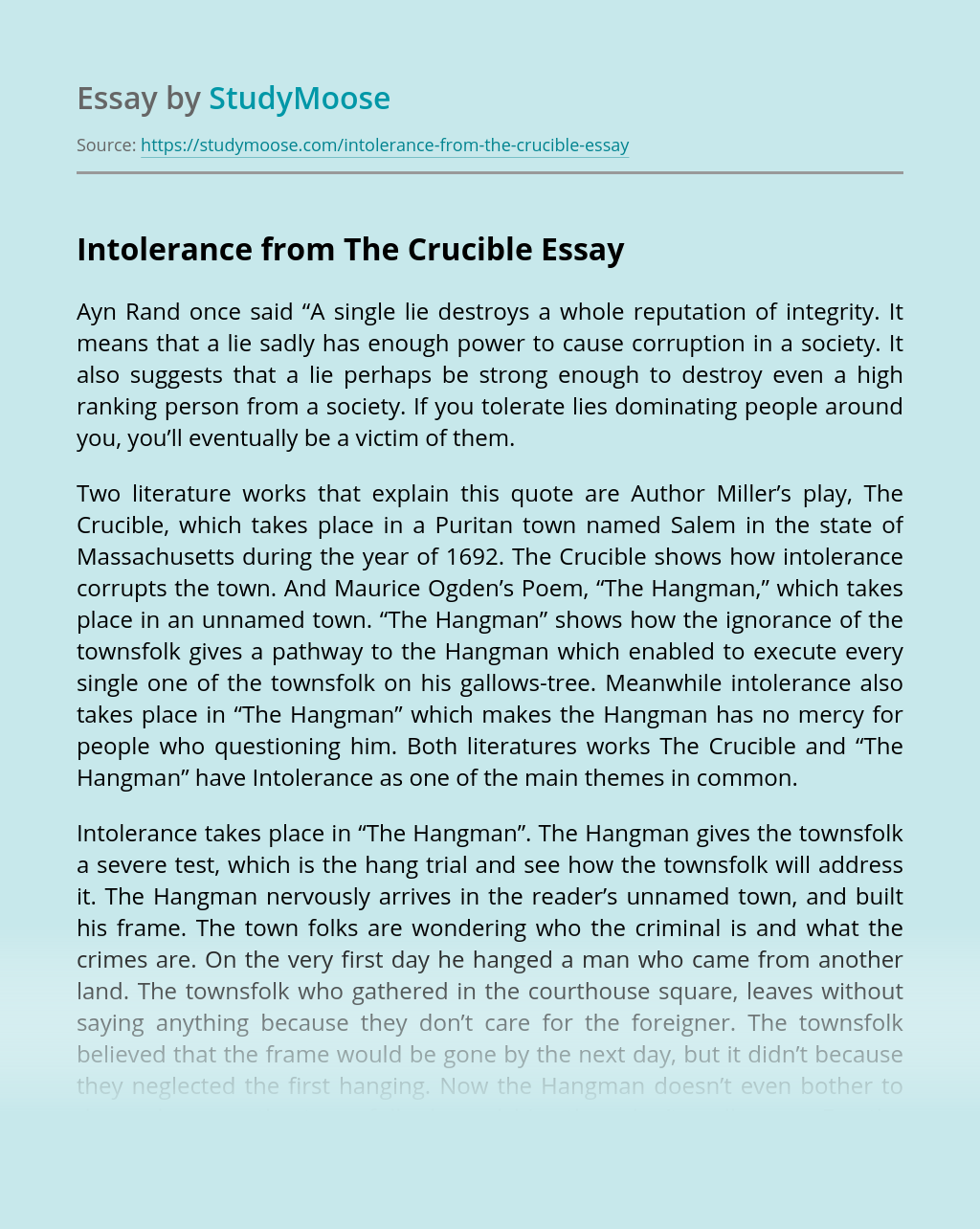 Don’t waste time
Get a verified writer to help you with Intolerance from The Crucible
Hire verified writer
$35.80 for a 2-page paper
Stay Safe, Stay Original