The British Characters In ‘Burmese Days’ Believe They Are The Rulers Of Burma. Does Orwell Agree? Can We Determine Who The Rulers Are And Who Are The Ruled?

Don't use plagiarized sources. Get your custom essay on
“ The British Characters In ‘Burmese Days’ Believe They Are The Rulers Of Burma. Does Orwell Agree? Can We Determine Who The Rulers Are And Who Are The Ruled? ”
Get custom paper
NEW! smart matching with writer

At the beginning of the novel, we see U Po Kyin saying that the greatest thing he would want to do was to fight in a British army to gain prestige. We see that he bribes his way to work for the Government because he believes that it is the best thing that he could be doing p. 3 Burmese Days. ) In the text, we see how a debate arises when the commissioner suggests that a native in the high rank has to be selected to be a member of the prestigious whites only club.

Ellis, a Briton who despises the blacks so much says that the natives are filthy and allowing them to go to their club, the only place where they whites) were allowed to be alone would be disgracing. This club is supposedly not meant for the Burmese. Since it was a prestigious one, it was meant only for the ruling class, the Britons.

Flory, who regards the Burmese with a little bit of humanity in his heart and does not despise them, is rebuked for associating with them and the other whites tell him that he ought not to think of suggesting his doctor friend to be the one to join the club.

They want to create an air of rulers around them and they think that the joining of their club by the natives will spoil that. In this text, we see how the Burmese natives on the other hand submit to the rules of these British characters. We see how they appear as servants to these rulers, taking all orders from them, for instance, we see how the butler is given an order by Ellis not to speak good English because it might cost him his job and he obeys this rule. In another instance, we see how Flory’s mistress- Ma Hla May, comes back to beg for Flory to take her as his mistress and not to send her away.

She goes to the point of kneeling down and crying so bitterly but the master does not even consider her request. His is the final say and when he decides that he wont take her back, she has to comply with the master’s wish. The way the Burmese address the British characters in the novel also indicates an air of authority. There is frequent use of the terms- master and my lord by the Burmese characters. The service that the British characters get from these natives shows that they are powerful in their society. Even when Flory and Elizabeth go to U Po Kyin’s village, they are honoured and the best dancers perform for them.

Even though Elizabeth is not pleased with the performance, we know that they were given the best treatment in this place of a feared magistrate. U Po Kyin’s greatness is overshadowed by the presence of these rulers. In addition, we see that, Po Kyin’s aim in setting the Dr. Veraswami, is targeted at impressing the British administrators. We see that he wants to spoil the good name that the doctor has created with the white friends so that he can get the privilege that is immediately directed at the doctor so that he can take the doctors position in the club.

Although he is recognized as a very powerful man in his area of jurisdiction, we see that for him to rise, he highly depends on the British administrators to rise through the ranks because they are the ones above and they alone hold the mandate to promote someone, especially the natives. We see that for someone to be total degraded in reputation, one had to go through a British link to ensure that the impact is felt. That was the way that U Po Kyin taking. Conclusion. Burmese Days is a novel that was written during the days of colonial rule in India and Burma is the writer’s setting.

These are days when the white superiority was emphasized and George Orwell was centering his focus on this white man’s minority rule. He is clearly brought out the rule of the British characters that was reinforced by the supreme rule from their mother country, Britain. We can see that the people subject to the British rule are the Burmese natives who submit to the rule of their masters, are given fewer privileges and get the poorest of services in the area. References: Burmese Days by George Orwell www. george-orwell. org/Burmese_Days/index. html

The British Characters In ‘Burmese Days’ Believe They Are The Rulers Of Burma. Does Orwell Agree? Can We Determine Who The Rulers Are And Who Are The Ruled?. (2016, Jul 31). Retrieved from https://studymoose.com/the-british-characters-in-burmese-days-believe-they-are-the-rulers-of-burma-does-orwell-agree-can-we-determine-who-the-rulers-are-and-who-are-the-ruled-essay 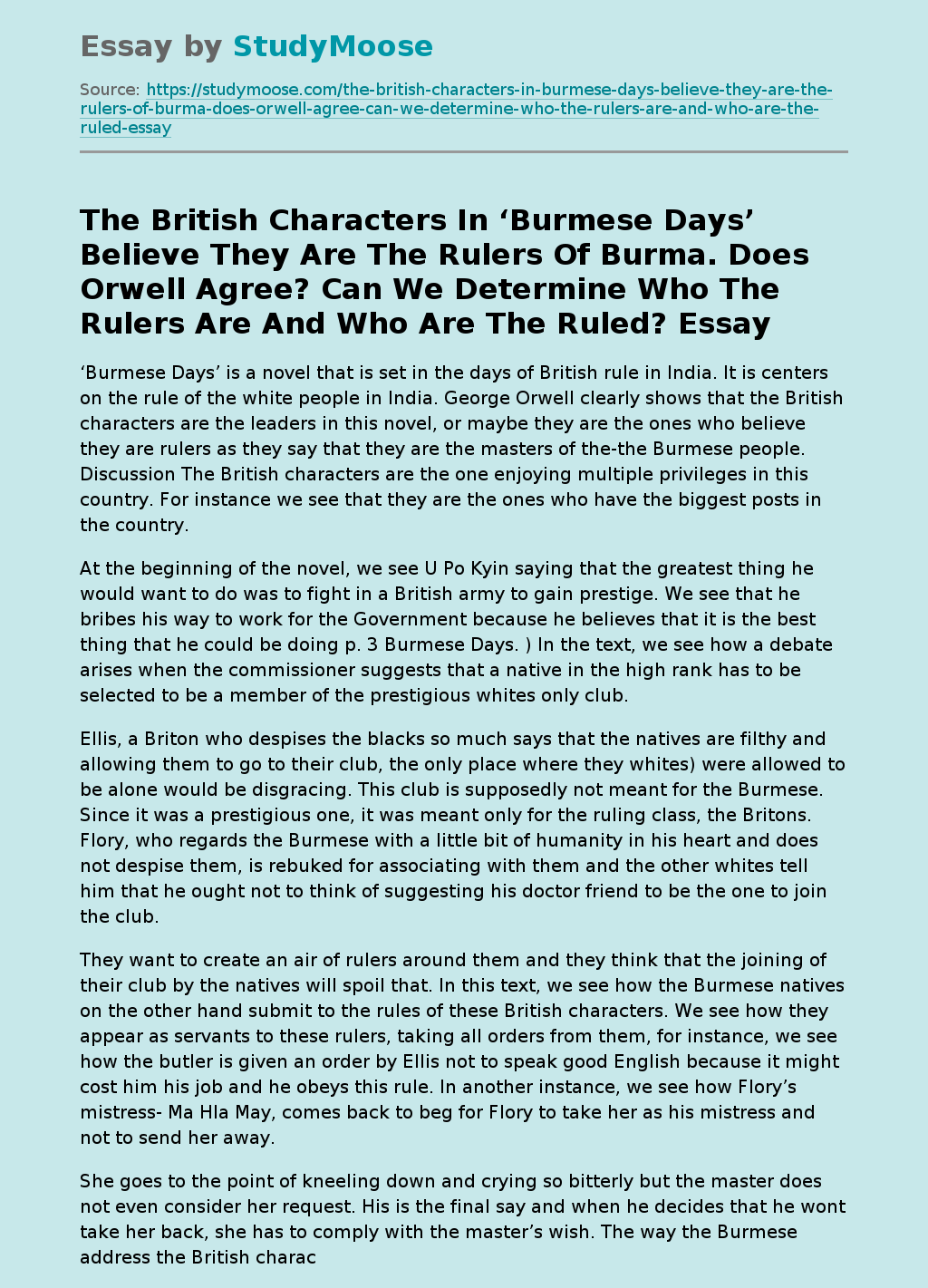