The Ballad of Worldly Wealth

The Ballad of Worldly Wealth is a representation of how money can bring pride and corruption into a society. The subject of this poem is about money. In this poem, the author describes everything about money and what it implied to individuals. The tone of this poem is an overall negative sensation that the author has about money and how he feels that just often money can be excellent however mostly it triggers evil. The speaker of the poem is the author and it looks like the audience are maybe individuals in his town.

Don't use plagiarized sources. Get your custom essay on
“ The Ballad of Worldly Wealth ”
Get custom paper
NEW! smart matching with writer

It seems as if he is enjoying the affects of money and people lusting over money and purchasing great deals of pricey things just for the sake of looks. The setting of the poem appears to be in a village sometime in the 1800 -1900’s. The type of this poem is a ballad, which is a narrative poem typically of folk origin and planned to be sung, including easy verses and normally having a refrain.

The poem is stating that cash could either be good or wicked and it depends on how you use it and how you value it. It might trigger goodness; or sometimes it might just cause sin.

Individuals in this poem are merchants, soldiers, captains, priests and perhaps some other individuals in this town. The main idea of this poem is money and how people just do things for money and then turn greedy with it. For instance, a priest must teach about faith for people’s salvation, not even if he wants the cash.

Soldiers ought to be fighting since they desire to defend their country and not just to get the cash. Although some soldiers might have been fighting to secure their nation and for their freedom, the author feels it was mostly for the money and the advantages that money can bring for them. He is stating that the majority of people starve over money and have no cares due to the fact that they can purchase whatever they desire.

There are a few rhetorical patterns in this poem such as “taketh” and “maketh,” “to throw,” “can stow,” and “fro,” “without a blow” and “ebb and flow.” He also uses a lot of repetition when he writes. For example, “These along can ne’er bestow Youth, and health, and Paradise.” By this, he means this is what the people expect to get with the money they have. There is also end rhyme used in the poem. For example, “Money maketh sin as snow,” and then he skips a line and says, “These alone can ne’er bestow.” He also does it again in the lines, “Like the Good, and Truth like lies,” he skips a line and then says, “Youth, and health, and Paradise.” This poem can also be better compared to a haiku because he does things where he has five syllables in the first line, seven syllables in the second line and then again five syllables in the third line.

The author also uses a lot of different patterns in this poem. For example, “Money moves the merchants all” and “Money maketh Evil show.” In both of these statements, he is showing money as the driving force behind these strong statements and money is the first word in both of those sentences. The poem also has a lot of the same endings like taketh, maketh, truth, youth, health, and gaineth. These are considered patterns of sound because they all end with “th.” The word money is also repeated several times throughout this poem because this is the theme of the poem.

I think that this poem is very affective in getting across the point that money can be good sometimes, but it can be just as bad. It really makes you think about why people will sometimes do a job they hate because they earn a lot of money. It seems silly sometimes that someone would do something they hate everyday because they are more concerned about the money and how much they are earning.

Some people who make a lot of money even will waste it and buy things they really don’t need just for the sake of buying it because they can. They begin to put their interests before people. That is when you know that they have just become greedy and only care about possessions and things that they can buy. Even today, money can be used wisely and there are some people who have a lot of money and are very generous and giving with it. Unfortunately, I think there are more people out there who let money turn them into someone who can become very greedy and who then begins to feel that there is never enough. We all know that money sometimes can be the root of all evil.

“Money taketh town and wall, Fort and ramp without a blow;”

The Ballad of Worldly Wealth. (2016, Apr 16). Retrieved from https://studymoose.com/the-ballad-of-worldly-wealth-essay 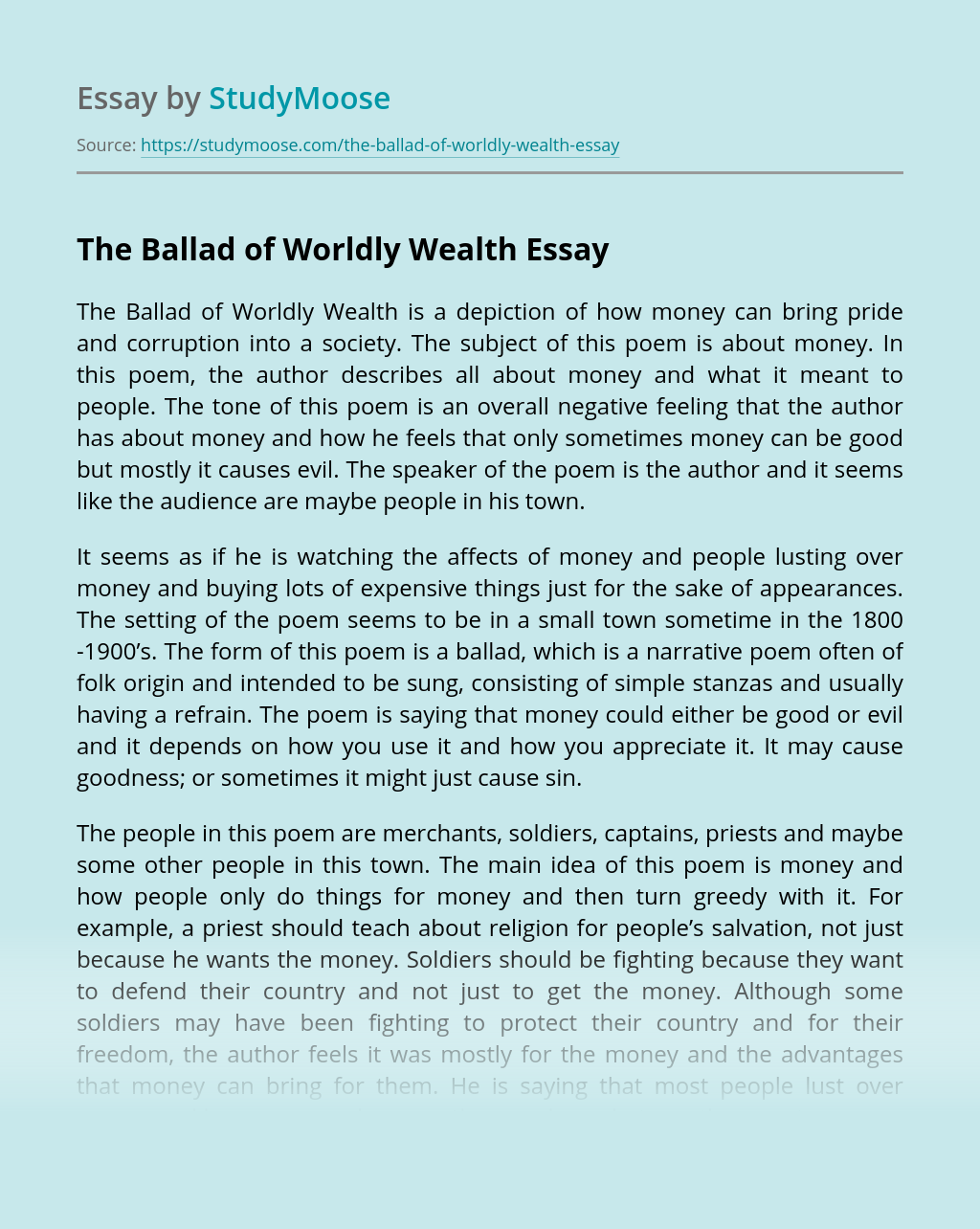