“The Amish Farmer” is a powerful tale that expresses the importance of point of view. Just as the plaintiff and defendant’s testimonies create new perspectives to a court case, the narrator brings new meaning to his story with his point of view. The narrator of “The Amish Farmer”, Vance, is a conflicted narrator. Although his point of view seems emotionally unattached and he refers to himself merely as the “raconteur” of the story, the narrator is torn between his true nature, similar to Noel’s, and his desire to be like Daniel.

There are many instances in “The Amish Farmer” that suggest Vance is depicting Noel in the story as he would if he were the main character. This is evident at the beginning of Vance’s tale. The narrator has the power to choose when and how to begin his story. This choice is very important, as it determines the point of view of the story and how the characters are to be viewed by the readers.

By starting the tale when Noel states that Daniel had tried to kill him, Vance seems to seek the readers’ pity for Noel and presents contempt towards Daniel. These initial characterizations can be seen as Vance attempting to defend Noel, much as he might defend himself.

Vance further justifies Noel’s character when he states, “He probably looked archaic to some of his peers, but he looked just right to me” (p.480). It seems evident that by creating a sense of purity, naivety, and integrity in Noel’s character, Vance is attempting to make up for any feelings of vulnerability that came from telling the story again.

When Vance is speaking with his students on the importance of point of view in the story, he asks the students to drop his (the “raconteur’s”) point of view and tell it from Noel’s (p.491). Vance’s declaration of being just a “raconteur” could be considered as an attempt to ease the vulnerability caused by telling the story, opening himself up to judgment and ridicule by his students. In choosing Noel’s point of view as the ideal perspective for the narrator, the idea is further established that Vance has a similar nature to Noel’s, for had the story been told by Noel in the first place, it would probably not have changed much from the story as told from Vance’s point of view.

As in the famous adage “the grass is always greener on the other side”, people oftentimes want to be someone they’re not. In “The Amish Farmer,” it is evident that Vance desires to be like Daniel, for the appeal and attention brought with being that character.

In wanting to be someone they’re not, people often idolize others who possess qualities they desire, no matter how imperfect the others might be. Vance clearly desires to be a knight in shining armor, a savior, one who understands women’s wants and needs. This need for a savior is just what Dawn found in Daniel, as he saved her from being stuck in the car and saved her from her loneliness. Vance describes Daniel with heroic qualities, speaking of how Daniel had sacrificed so much, even after the affair: “He gave it all up, his God, his inheritance, his family, his community,” (p.491). Because Vance desires to be the Amish farmer character, his honor and respect for Daniel remain even after the affair, as if justifying the adultery because Daniel saved Dawn from isolation.

Vance’s need to be the heroic figure is seen throughout his tale, even before it begins. The last line, when Katie Jay says to Vance, “Oh, I need that Amish farmer. Don’t you see?” (p.493), expresses a woman’s need to be saved, and furthermore, expresses the desire of Vance to save one. Although initially confused by Katie Jay’s response, it is clear in the beginning of “The Amish Farmer” that Vance empathizes the need for a woman to be saved. He further establishes this idea when, before beginning his tale, he says that “It is because of her [Katie Jay] that I am writing the story now” (p.479), as though he is telling the story to try to create himself as more of an Amish farmer. 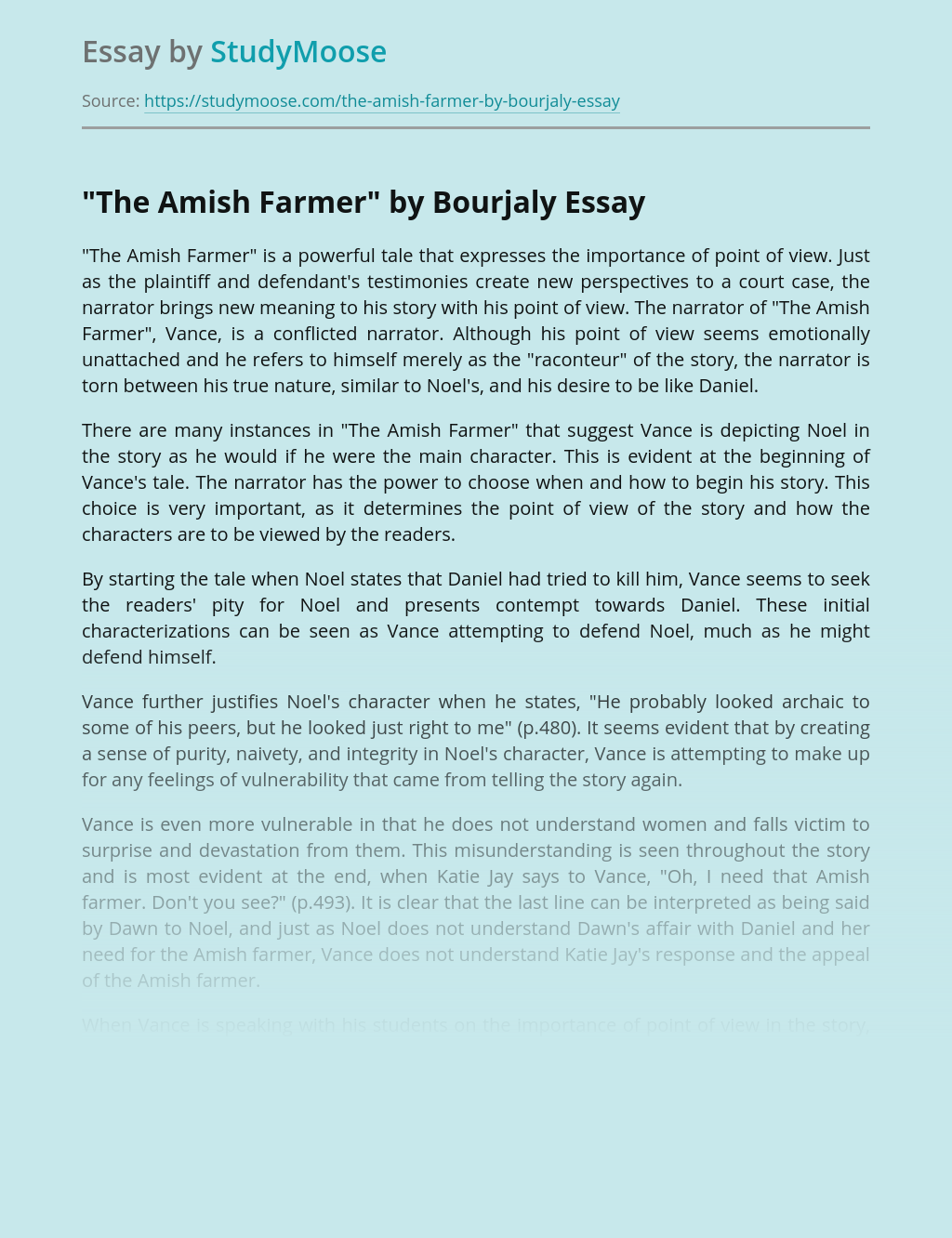 Don’t waste time
Get a verified writer to help you with “The Amish Farmer” by Bourjaly
Hire verified writer
$35.80 for a 2-page paper
Stay Safe, Stay Original