In addition, Regis maintains an ownership interest in Provalliance, which operates salons primarily in Europe, under the brands of Jean Louis David, Franck Provost and Saint Algue.

Don't use plagiarized sources. Get your custom essay on
“ SWOT Analysis of Regis Corporation ”
Get custom paper
NEW! smart matching with writer

Regis also maintains ownership interests in Empire Education Group in the U.S. and MY Style concepts in Japan. System-wide, these and other concepts are located in the U.S. and in over 30 other countries in North America, South America, Europe, Africa and Asia (Regis Corporation, 2009).

In its nearly 9,500 North American salons, Regis offers a wide range of hair care services including haircuts, styling and coloring, as well as a wide selection of professional hair care products (Regis Corporation, 2009).

Through their 96 Hair Club for Men and Women locations, Regis also offers a comprehensive menu of hair restoration products and services (Regis Corporation, 2009).

Regis began 88 years ago and since then has grown into a multi-billion dollar company. Regis Corporation owns several well-known brands such as SuperCuts, Master Cuts, Vidal Sassoon, and ProCuts.

They also have their own complete hair care line of products called DesignLine.

Regis strategically places all of their salons in locations with high customer traffic flow such as malls, shopping centers, and Wal-Mart Supercenters. Having salons located in these areas allows for customer flexibility as well as a highly visible location for potential walk-in clientele. Regis is also has salons operating in Canada and Puerto Rico, as well as over 400 salons operating internationally in Europe (Regis Corporation, 2009).

After reading many Regis employee reviews from glassdoor.com, the majority of cons the employees listed had to do the management. Employees described management as unconcerned with quality of stylists hired, unresponsive to employee’s needs and concerns, and low opportunity for advancement. Upper and lower level management need to be properly trained and incorporate employee empowerment which includes employee recognition, sharing leadership, and providing feedback (“Glassdoor.com,”).

After reviewing many customer reviews, many of the complaints were centered on customer service issues. Some customers complained they were rushed through their service and there were complaints of having to wait over an hour for their service even though they had an appointment. Bad customer service is bad for the hair business because you not only loose that one client; you also lose any future referrals from the client and it can develop a bad reputation for the salon itself (“Glassdoor.com,”).

Two current opportunities for Regis Corporation’s are their hair restoration businesses and the availability of real estate for new construction. Two of Regis Corporation’s current threats are the downturn of the general economic environment and their current negative same-store sales.

Regis is a well-known brand name and had been in business for over 80 years. Regis is one of the largest companies in the hair care industry holding about 2% of the worldwide market. Their salons are conveniently located in malls, shopping centers, and even within Wal-Mart Supercenters. They have salons located all across the United States and have expanded their business to Canada, Puerto Rico, and Europe.

Regis needs to improve on their employee satisfaction in regards to management and need to focus on improving customer service relations.

Regis’s newly acquired hair restoration line provides a great opportunity to consolidate and expand this industry in turn creating a great deal of revenue. The availability of real estate for new construction is also a great opportunity for Regis to expand in the construction of new salons and new hair restoration centers, which will allow Regis to achieve long-term growth objectives.

A threat to Regis is the downturn of the economic environment, which results in consumers spending less and waiting longer between salon visits. If Regis same-store sales do not begin to improve it will have a huge impact on their financing arrangements. 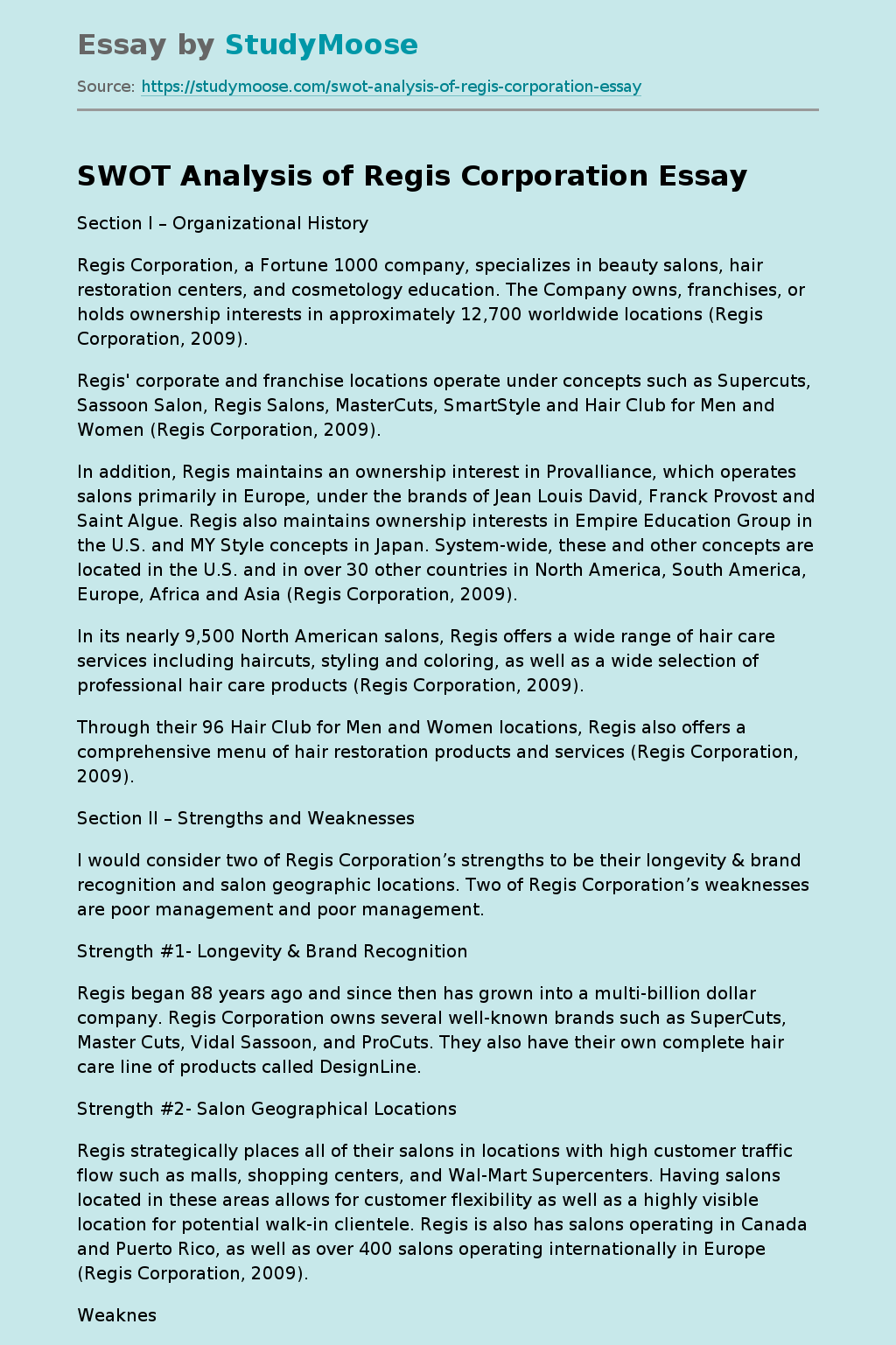