The movie in summary portrays that earth is slowly dying due to the pollution that the human race produces each day but do not realise the side effects of this. However in this story, it begins where piles of trash were seen on the surface of earth and the human race were forced to leave for space as it is too difficult to survive and sustain in a place where there is no sign of survival at all. Thus, they created a robot which is capable to clear the trash by crushing it into cubes.

Don't use plagiarized sources.
Get Your Custom Essay on Summary of Wall-E Just from $13,9/Page

However as days go by, Wall-e was the only robot left as the others malfunction.

While collecting trash and putting it into cubes, Wall-e found a small plant in the midst. Coincidentally, Eve, a robot shaped as an owl which functions to look for any signs of living plants was sent down to earth by the humans. Wall-e then fell in love with Eve and he finally brought Eve back to his storage house where he kept all the junks he found useful including the plant.

This is where Eve scan the plant and quickly put it inside of herself thus deactivating. It was then the spaceship from space was brought back to earth to bring Eve back to space so that she can report to the Captain of the spaceship, Captain B.

McCrea. Wall-e at that time also followed Eve out of love. Back on the spaceship, it was seen as people living there was obese and suffered from major and severed mass loss in bones as they were lazy and everything is automated by a machine. Eve and Wall-e then brought back the plant to be brought back to the captains attention where when a living plant species is found on earth it is then safe for the human race to fly back to earth and return to their normal lives again as there is now proof that there is sign of survival there.

However, the automated robot created chaos for the captain as it did not want the people to go back to earth believing that earth is still not safe for the people to go back. Thus causing Wall-e to malfunction as Wall-e was the keeper of the plant when they were fighting over it. However, in the end the captain gather all his courage and strength to put up a fight with the automated robot by switching its switch back to manual. Thus, all of the human race can now travel back to earth with a new promise at hand to protect the earth from pollution and trash. 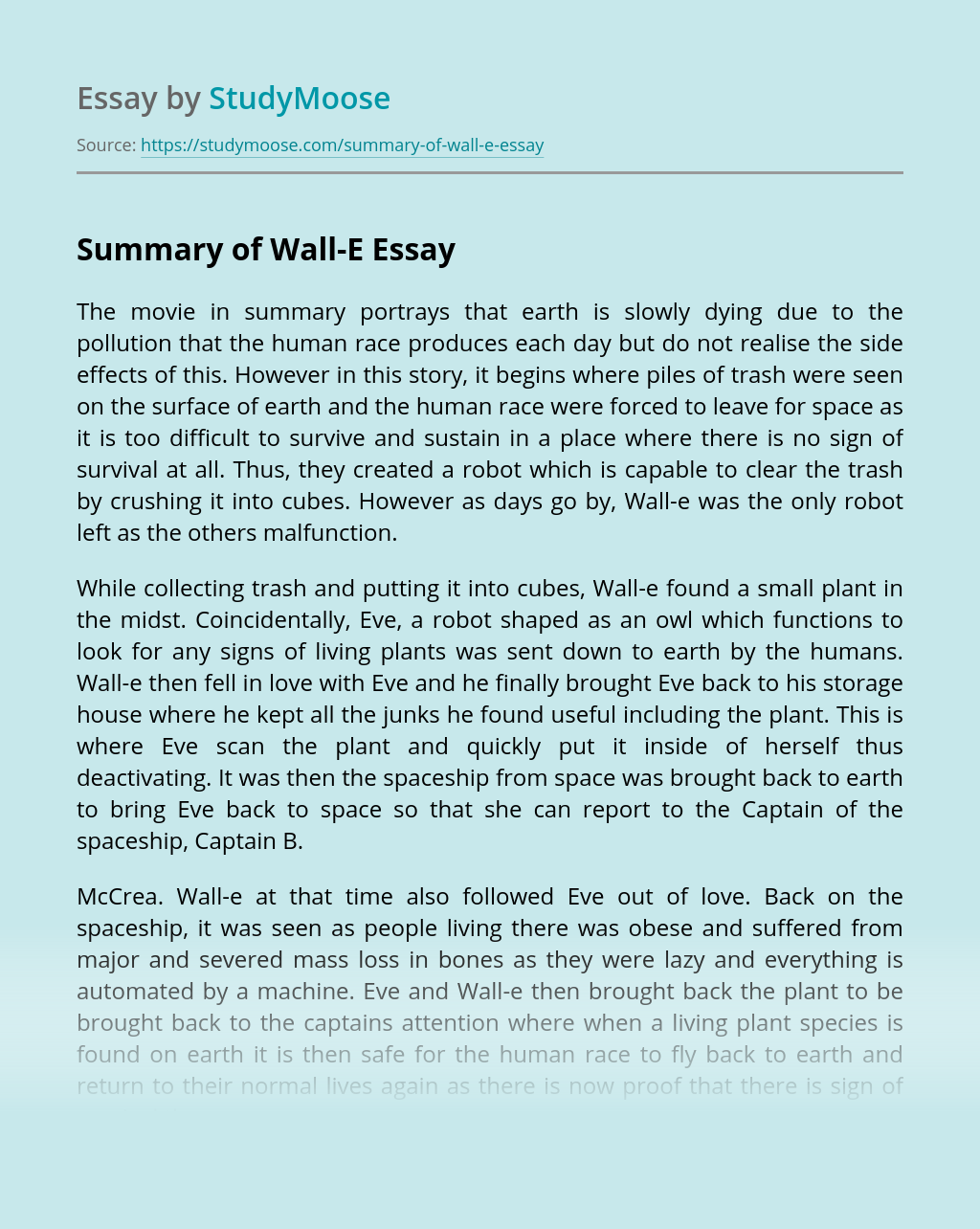 Satirical Mouthpiece in the Adventures of Huckleberry Finn

Typically when you hear “19th century literature,” you think of the formal and monotonous, yet gramatically and contextually correct writing of authors such as Charles Dickens and Harriet Beecher Stowe; but one author stood out among them and his name was Mark Twain. Twain started a new trend of including new aspects of writing into... VIEW ESSAY

4:08 PM Hi, I’m Misty Danielle Copeland and yes have had a tough life but, its helped shape me into the amazing person and dancer I am today. Now lets take it way back to when I was born. I was Born on September 10, 1982 in Kansas City, Missouri I was born with 4... VIEW ESSAY

In most 18th century stories, men portray to be the more dominate figure in the story or family. Women in the stories tend to be less important than the males. In Mary Shelley’s Frankenstein: or, The Modern Prometheus, women are mention that much and even if they are, they end up being killed or dying.... VIEW ESSAY

View sample
Friendships in "Of Mice and Men"

Throughout life, one establishes friendships to better ensure their future. The novel Of Mice And Men, written by John Steinbeck, is about a group of traveling labor workers and the hardships that they overcome. The friendship between George, one of the main characters, and Lenny, a retarded man and of Candy, a crippled man, and... VIEW ESSAY