Relevant Information about the Novel

Mrs. Dalloway is Virginia Woolf’s modernist masterpiece. It is her fourth novel. The working title was The Hours until Woolf eventually renamed it after the female protagonist. Woolf spent three hours each day writing in a shed in the garden at Monk’s House in Sussex. She wrote Mrs. Dalloway in big notebooks that she hand-bound herself with her husband, Leonard, through the printing press. In Mrs Dalloway, Mrs. Dalloway did not make her debut.

She first appeared a decade earlier in print in 1915, in Woolf’s first ever published novel, The Voyage Out. The Clarissa Dalloway, who appears in Mrs Dalloway’s 1925 novel, along with husband Richard, who also featured in The Voyage Out, is a slightly different character from the one who is among the passengers on the boat traveling to America in Woolf’s debut novel. (Joy Lanzendorfer, 2015)

Mrs Dalloway’s first line is perhaps the most famous opening line in Woolf’s fiction: ‘ Mrs Dalloway said she would buy the flowers herself.

‘ What is encoded in this phrase, as the subsequent paragraph of the novel makes clear, is that Clarissa Dalloway is organizing a party but will not send her servant to the party for the flowers. (So Mrs. Dalloway’s cover line reveals something of the class and social position of the Dalloways and suggests something of the character of Mrs. Dalloway). But Woolf had provided a slightly distinct opening line in the initial sketch that Woolf wrote, which later became the novel’s opening section: ‘ Mrs Dalloway said she would buy the gloves herself.

‘ The shift to ‘ flowers ‘ presents a whole bouquet of flower-imagery that will adorn the novel.

Woolf’s novel was inspired by her reading of James Joyce’s Ulysses, published in 1922 as a book form but had been appearing in the Little Review since 1918. Woolf, however, criticized his work and went as far as calling Joyce’s work as “a queasy undergraduate scratching his pimples”. She described it as a work of the more squalid showings in life Woolf was keen of the ‘one-day’ concept of the book’s story and her approach, then, would be different.

At first, Woolf thought Clarissa, like Kitty Maxse, would die at the end of the 12 hours. She left the concept at some stage, however, she developed a double for Clarissa called Septimus Smith, a shell-shocked veteran of the First World War suffering from post-traumatic stress disorder. Inventing Septimus changed the book’s direction. Woolf wrote, “I adumbrate here a study of insanity and suicide ; the world seen by the sane and the insane side by side something like that.” (Joy Lanzendorfer, 2015)

There are multiple shows, themes and subjects in the book. One might see it as a lady throwing a party for entertainment, a demonstration of the effects of the World War I and social aftermath because it was also very inspired by the First World War. Looking at the first of the main ideas, he says that it is the novel’s main plot in a rough summary. The First World War has ravaged Europe. Later on, there was wealth and opulence, but in its aftermath it left tribulation and loss. It struck a great deal of disillusionment and disappointment that defined the landscape of the old continent. It was welcomed by abandonment, resentment, bitterness, and broken hopes that immediately after it reflected life. In terms of destruction and military death, no nation was spared. More than nine million fighters died and seven million civilians died. Those numbers were exceeded by injured and wounded soldiers. That’s more than 16 million people, both civilian and military, and a whole generation of young men have been wiped out.

All the action of Mrs. Dalloway takes place in London during one day and night in mid-June, 1923. Clarissa Dalloway is an upper-class house wife married to Richard, a politician in the Conservative Party. She suddenly meets an old friend Peter Walsh on her way to the flower store. Pain from the previous fuels the magnitude of their relationship’s issue. Peter once loved Clarissa passionately, but she denied his marriage proposal. Peter and Clarissa have always been close to each other, but also very critical of each other, and their short encounter is full of shared memories. Peter leaves when Clarissa’s daughter Elizabeth enters, and he walks to Regent’s Park, thinking about Clarissa’s refusal of his marriage offer. He follows a young woman, idealizing her from afar.

At this point, the stage belongs to a certain man called Septimus, a veteran of World War I who is suffering from shell shock. Septimus and his Italian wife, Lucrezia, wait in Regent’s Park. Septimus imagines he’s a sort of prophet and has his deceased soldier friend Evans’ hallucinations. Septimus once was an aspiring poet, but he became numb and incapable of feeling after the war. He thinks that his absence of emotion is a crime that has been sentenced to death by the globe and is often suicidal. Lucrezia has been taking Septimus to Dr. Holmes, who is convinced that Septimus has nothing wrong with him and is “in a funk.” Sir William Bradshaw, a famous doctor who subscribes to a “proportion” worldview and is a psychological bully to his patients, is visited by the Smiths that evening. Sir William plans to send Septimus to a mental institution in the country.

Richard Dalloway has lunch with the famous generals ‘ Lady Bruton, and the shallow but charming aristocrat, Hugh Whitbread. They help Lady Burton to write a letter about Emigration. Richard gets roses for Clarissa after lunch and plans to tell her that he loves her, but he can’t say it out loud when he sees her finds. Clarissa takes into account the privacy of the soul and the gulf between a wife and a husband. Richard leaves and Elizabeth emerges with her history tutor, Doris Kilman. Doris is poor, unattractive and bitter, trying to transform Elizabeth into Christianity. Clarissa and Miss Kilman are mutually hateful and jealous of each other’s impact on Elizabeth. Elizabeth and Miss Kilman go shopping and then Elizabeth leaves, leaving Miss Kilman wallowing in hatred and compassion.

Septimus suddenly grows lucid while Lucrezia makes a hat. The pair is putting together the hat, joking, sharing a moment of happiness. Then Dr. Holmes comes to Septimus for a visit. Lucrezia tries to stop him, but Holmes pushes past her. Septimus believes Holmes is a monster condemning him to death, and Septimus jumps out the window, killing himself as an act of defiance.

Peter overhears the ambulance that comes to aid Septimus, and states it as a symbol of English civilization. Afterward, Peter attends Clarissa’s party, where most of the protagonists of the upper class of the novel ultimately come together. Clarissa worries that the party will fail and acts as a “perfect hostess,” and she is also aware of Peter who looks critically of the situation. Sally Seton, a girl Clarissa had loved passionately as an adolescent at Bourton, unexpectedly comes at the party. The one-time radical Sally has married a wealthy man and settled down. The Prime Minister visits briefly but his presence is anticlimactic. Sir William Bradshaw comes late, his wife tells Clarissa about Septimus’s suicide act. Clarissa goes off alone to consider the sudden arrival of death at her party, and she feels a kinship with Septimus. She supports Septimus’ decision to commit suicide not willing to sell his soul to “monsters” produced by the social system. She sees Septimus’ suicide as an act of communication. Peter and Sally reminisce, waiting for Clarissa to join them. The party comes to an end, and the guests are leaving the ceremony gradually. Even after all these years, Peter still feels Clarissa’s thrill and love – hoping that one day his dreams will come true. 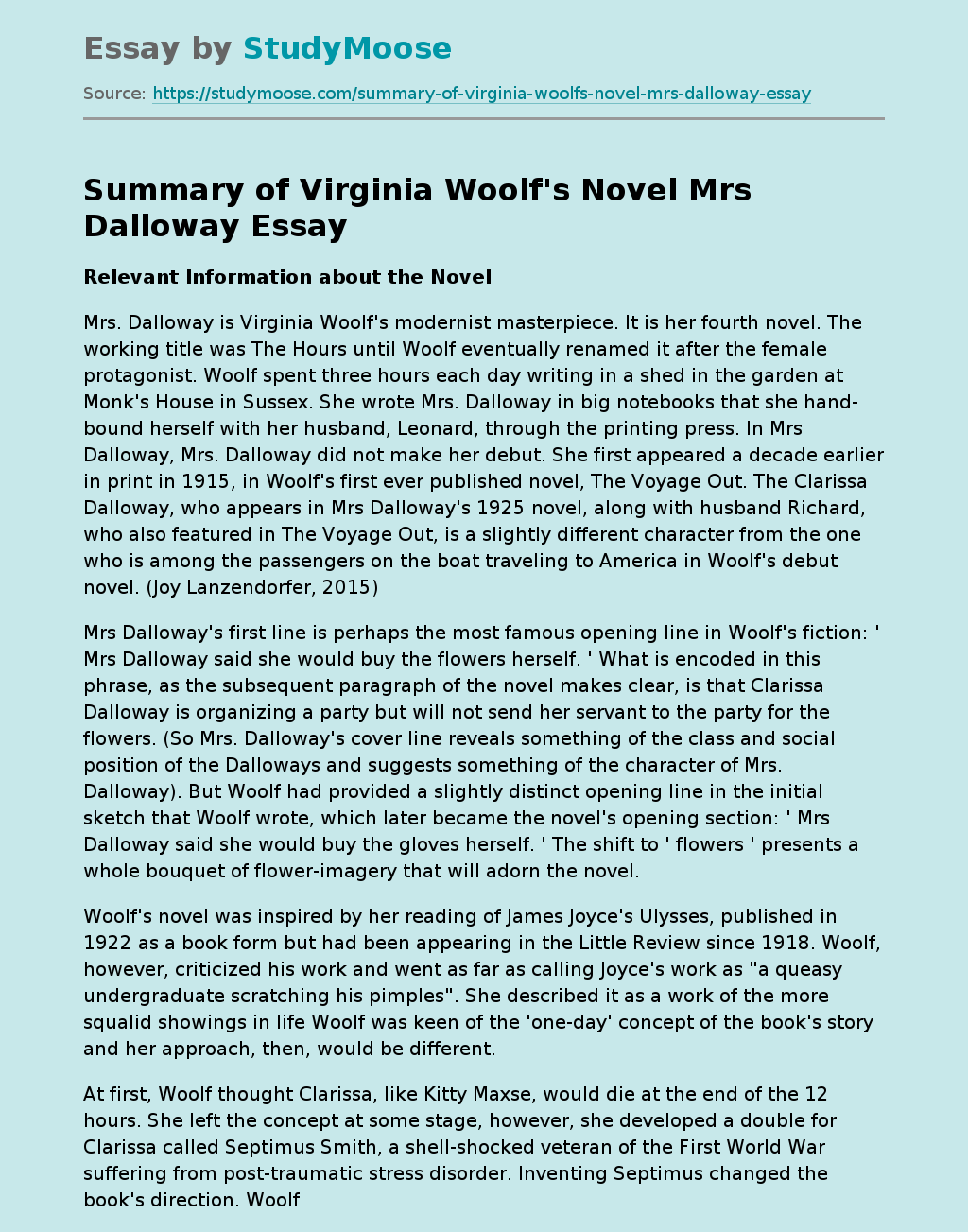