Summary of a Novel Oryx and Crake

Don't use plagiarized sources. Get your custom essay on
“ Summary of a Novel Oryx and Crake ”
Get custom paper
NEW! smart matching with writer

Disease transmission (xenozoonosis) and permanent alteration to the genetic code of animals are a cause for concern. Genetic engineering, recombinant DNA technology, genetic modification/ manipulation (GM) and gene splicing are terms that are applied to the manipulation of genes. It involves the isolation, manipulation and reintroduction of DNA into cells or model organisms, usually express a protein to reach desired effects. Cloning is the process of creating an identical copy of something.

Genetic recombination is the process by which a strand of DNA is broken and then joined to the end of a different DNA molecule. A genetically modified organism (GMO) is an organism whose genetic material has been altered using the genetic engineering techniques generally known as recombinant DNA technology.

Why Oryx and Crake Was Written

“Every novel begins with a what if and then sets forth its axiom. The what if of Oryx and Crake is simply What if we continue down the road we’re already on? How slippery is the slope? What is our saving graces? Who’s got the will to stop us?” –Margaret Atwood

Settings in Oryx and Crake

“Please don’t make the mistake of thinking that Oryx and Crake is anti-science. Science is a way of knowing, and a tool. Like all ways of knowing and tools, it can be turned to bad uses. And it can be bought and sold, and it often is. But it is not in itself bad. Like electricity, it’s neutral. The driving force in the world today is the human heart – that is, human emotions. (Yeats, Blake – every poet, come to think of it – has always told us that.) Our tools have become very powerful. Hate, not bombs, destroys cities. Desire, not bricks, rebuilds them.” –Margaret Atwood

Plot Summary of Oryx and Crake

The protagonist of Oryx and Crake is Snowman, clad only in a bed sheet and a Red Sox cap, who appears to be the last human being on Earth. He’s not entirely alone, however; strange hybrid beasts such as wolvogs, pigoons and rakunks are roaming freely. As well, a group of what he calls Crakers—strange human-like creatures—lives nearby. They bring Snowman food and consult him on matters that surpass their understanding; thus, Snowman comes across as a post-apocalyptic hermit guru. As the story develops, these assorted lifeforms are revealed to be the products of genetic engineering. In flashbacks, we learn that Snowman was once a young boy named Jimmy, who grew up in the early 21st century. His world was dominated by multinational corporations which kept their employees’ families in privileged compounds separated from a global lower moiety of pleeblands. Shortly after Jimmy’s family moved to the HelthWyzer corporate compound (where his father worked as a genographer) Jimmy met and befriended Glenn (later known as Crake), a brilliant science student.

Atwood’s satirical take on current society is presented most pointedly in the jaded activities of these two youths. Jimmy and Crake spend a lot of their free time playing online computer games such as Kwiktime Osama (a reference to Osama bin Laden) and Blood and Roses, or watching live executions, Noodie News, frog squashing, graphic surgery and child pornography. One of Glenn’s favourite pastimes is an online game called Extinctathon, a trivia game which requires immense knowledge of extinct animal and plant species. Using the codenames Thickney (Jimmy) and Crake (Glenn), they both play as teenagers. It is not until they are both in university that Jimmy discovers that Crake has worked his way up to become a Grandmaster.

On another trip through the dark underbelly of the Web, they come across an Asian child pornography site, where Jimmy is struck and haunted by the eyes of a young girl. Unknown to Jimmy, Crake is similarly affected by the sight of this young girl. Crake eventually finds this girl (or a woman who could be her) and hires her, as both a prostitute and a teacher of the Crakers. Her name is Oryx. Jimmy identifies the haunting memory of the young girl with Oryx, though it is never made clear as to whether or not the two are the same person. Oryx eventually becomes intimately involved in the lives of Jimmy and Crake, and both fall in love with her. Oryx, however, views their relationship as strictly professional and only admires Crake as a scientist and “great man”.

For fun and affection she turns to Jimmy, though her feelings for him are not as clear. The two hide their relationship from Crake, and Jimmy is often plagued with the thought of Crake finding out about his betrayal. Crake uses his prominent position at a biotech corporation to launch a project to create the Crakers. His goal is to create a peaceful society that will live harmoniously with each other and nature. These genetically engineered humans are leaf-eating herbivores and they only have sexual intercourse during limited breeding seasons when they are polyandrous. Thus, many of the apparent conflicts in human culture are replaced with a mockery of intelligent design.

At the same time, Crake creates a virulent genetic pandemic that, apparently, killed off all humans except for Jimmy. Jimmy was unknowingly vaccinated with the intention of acting as a guardian for the Crakers. Thus, Crake represents a mad scientist; he is maddened by the troubled society that he lives in. His rationale is that he is heroically saving intelligent life from an inevitably dying society. In the story’s climax, Crake’s perfected “hot bioform,” present in one of his company’s products, is activated and spreads throughout the world. When called to account for his actions by Jimmy, Crake kills Oryx by slitting her throat.

In rage and panic, Jimmy shoots Crake, resulting in his being left to obsess over his vanished world and unanswered questions. Jimmy contemplates abandoning the Crakers but is constantly haunted by the voice of Oryx, and reminded of his promise to her to watch over them. Though Crake opposed and belittled human religion, Snowman instills the Crakers with his own invented religion revolving around Crake and Oryx. Oryx becomes the guardian of the animals and Crake the creator god. Crake suffers from unremembered night terrors. During visits, Jimmy hears Crake screaming in his sleep. Crake claims to not remember them. This forms one of the book’s most profound ironies. Crake is a leader in the most advanced (and corrupt) health care system in human history, and Jimmy is unable to save humanity by simply getting Crake’s head examined.

At the same time, however, Crake attends a university referred to as Asperger’s U, referring to the university’s high population of incredibly intelligent, socially awkward people, which might suggest that his idea was not the product of insanity or something ‘wrong’ with him, but rather the knowledge that everything else around him was wrong. During Snowman’s journey to scavenge supplies, he is uncomfortable wearing shoes now that his feet have become toughened without them. He cuts his foot on a tiny sliver of glass. Infected by who-knows-what descendant of transgenic experiments, his body cannot fight back, and his leg becomes inflamed.Returning to the Crakers, he learns that three ragged true humans have camped nearby. He follows the smoke from the fire and watches as they cook a rakunk. Uncertain of how he should approach them (Blast them to bits to protect the Crakers? Approach with open arms?) he checks his now unworking watch and thinks, “Time to go,” leaving the reader to speculate as to what his actions and future will be.

Coral Ann Howells argues that Oryx and Crake is in some ways a sequel to Atwood’s The Handmaid’s Tale in that it carries the national catastrophe in the earlier novel to global level[5]. A major reference seems to be to the “Last Man” topos in science fiction, which was inaugurated by Mary Shelley’s
The Last Man, also a post-apocalyptic novel, whose main character is the only survivor of a plague that has killed off all other humans. George Orwell’s Nineteen Eighty-Four (1949) had a working title that relates it to Shelley’s book: “The Last Man in Europe”[6]. Other references, of course, include Shelley’s Frankenstein (1818/1831) as well as Jonathan Swift’s Gulliver’s Travels[7] (1626/1635). Gulliver’s Travels is also the source of one of the two epigraphs and puts emphasis on the claim that the speculation about the near future in Oryx and Crake serves to make a point about the present state of the world. Swift’s speaker as quoted by Atwood says: “my principal design was to inform you, and not to amuse you” (Oryx and Crake, Epigraph). The second quotation from Virginia Woolf’s To the Lighthouse (1927) refers to the absence of safety in the word, pointing to Snowman’s existence in the world after Crake’s catastrophe.

Summary of a Novel Oryx and Crake. (2021, Apr 02). Retrieved from https://studymoose.com/summary-of-a-novel-oryx-and-crake-essay 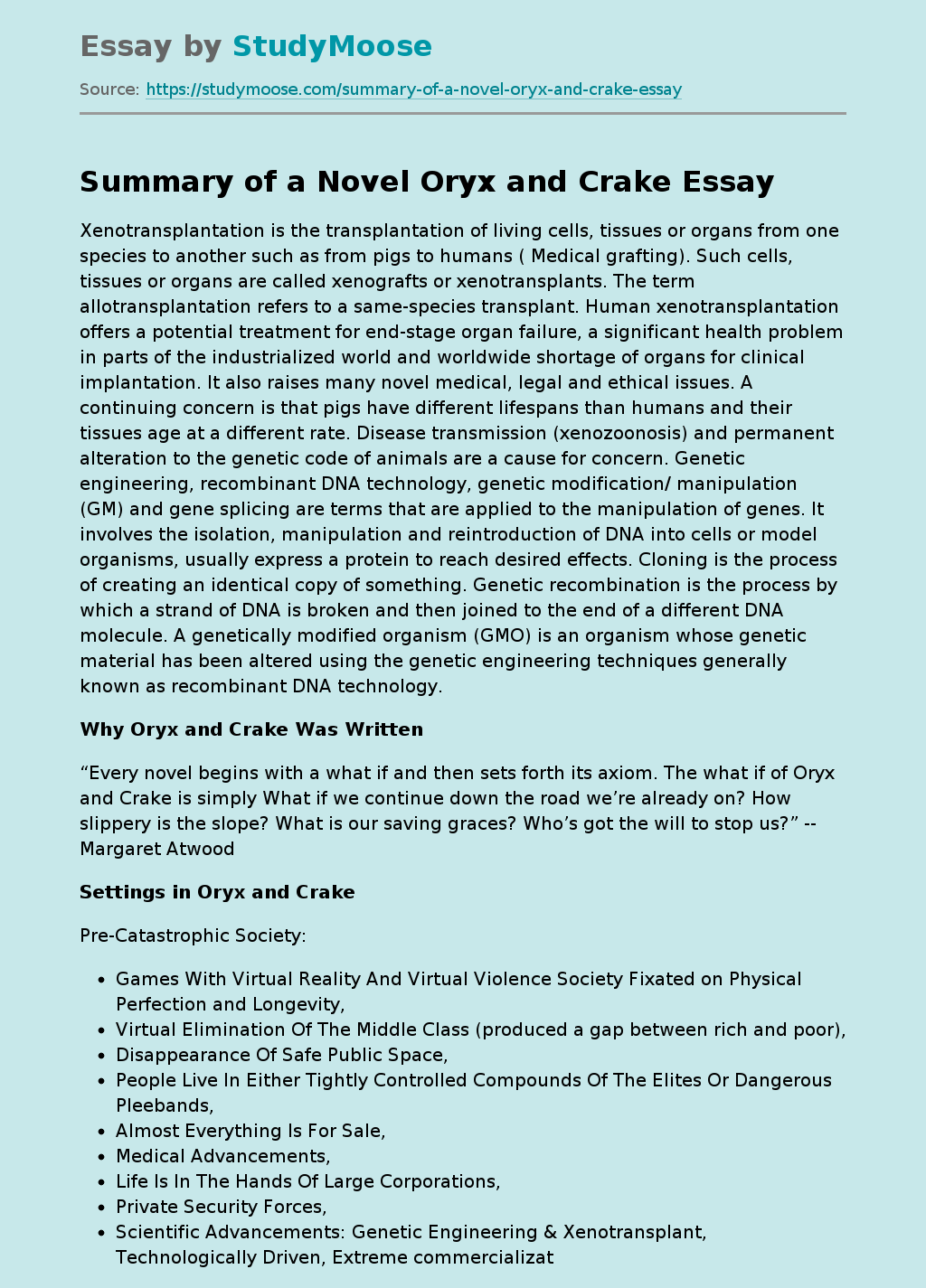