Starbucks has become one of the most recognised brand in the world, known for selling highest quality coffee products. The company discovered that there was a potential in beverage retailing and today operates 8337 stores worldwide. The founder, Howard Schultz started in Seattle with a concept of high quality product in a relaxed atmosphere. But a new market is always a new challenge and carries an amount of risk for a company.

This assignment is going to analyse the company’s international expansion through local culture and guidance notes will be given.

Turn in your highest-quality paper
Get a qualified writer to help you with
“ Starbucks’ cultural adaptation in International Operations ”
Get high-quality paper
NEW! AI matching with writers

Starbucks international strategy was to develop the brand and its strengths in a variety of countries. In 1996, the first country “invaded” was Japan, and even though there was a 1000 years tea history, the company successfully managed to grab customer’s attention to a new concept.

The strengths from the American market were exported worldwide, to give an image of a product that suits everyone. But the operation strategies differed; Starbucks decided to operate through a number of joint ventures and licensing arrangements with prominent retailers to gain an easier access to new markets and dominate it, before moving further to new potential markets (differing from American approach where the stores are largely company-owned).

The reason was that when entering a new market, major factors where important such as the local competition and issues related to price and cost. Starbucks had to conform itself to the economic scale already present in specific market and result to a cost disadvantage (resulting in production, marketing, research and development constraints), consequently the company acquired in 1998 the Seattle Coffee Company in the UK to access a new market easily.

The idea is that an experienced local partner can help identify locations, sift through tax issues and give Starbucks stores more community appeal.

Starbucks understood their brand image was going to be a major selling point and when entering a new market, their goal was to introduce their diverse product line while at the same time acquiring a large portion of market share through the creation of customer loyalty and a “special” relationship (offering the added value of venues with a cosy feeling and good atmosphere where guests can relax while sipping their favourite Starbucks coffee). Starbucks understood that by creating customer fidelity, consumers would not mind paying extra money for a cup of coffee.

Starbucks endured fierce competition in Japan such as Doutor Coffee Company and the Pronto Corporation which are well established chains. Furthermore, their access to local culture was done through partnership and the profits were reduced (share of 20% instead of 50%).

On the other hand, Starbucks understood that they had a competitive advantage over local chains, with the ability to access raw materials of high quality and employee/ employer relationship with a belief that a satisfied employee contributes a great deal in a successful company. Furthermore, the company’s mission statement established by Howard Schultz states that employees should treat each other with respect and dignity, while working in a great environment. The company also stated that it embraces diversity and contributes to local communities and environment .

Those values helped the company to sell a part of the “American Life” and a new luxury notion of coffee retailing to customers (while they cannot afford a luxury car, they can still afford a luxury coffee) with the obstacle that in poor countries people will prepare coffee at home rather than buy it on their way to work.

The target in Europe is the young generation because they see Starbucks on television and movies and think it is “cool”. As a result the company opened stores in strategic areas where young people spend their time (in Berlin or in Paris’ Montmartre).

Even though Starbucks has a policy of fair trade and ethical responsibilities, problems arose in countries with cultural differences and in politically unstable countries. Starbucks in a joint venture with an Israeli company (Delek group) closed its six stores in Tel- Aviv last year amid continuing conflict between Israelis and Palestinians and market challenges.

Starbucks wants to be as well known as Coca-Cola in the whole world and this implies the image that goes with it (“Our passion transcends language and culture” ). Following a “We are the Champions!” strategy can be very risky and the company can increase its vulnerability, while trying to have a broad attractiveness. U.S war in Iraq opposition created a boycott of the company in Lebanon and the current trend toward anti-Americanism and anti-globalisation damages Starbucks reputation through an impact on corporate image, losses in brand equity, Internet propaganda, NGO activity towards the company and negative brand associations. Furthermore, the company’s financial results can be touched as well with drop in sales; costs caused by local activism and sunk costs in the case of a pull out.

Starbucks brand is already well established in the International market. To conserve market share, Starbucks needs an increased local dimension which will be linked to local store opening and will be able to decrease the local resistance from communities.

Furthermore, the image of capitalism and push methods that Starbucks used (such as in China) won’t be sustainable in the long-term. Starbucks should promote an international image for its products, as they represent a new trend in coffee culture, while maintaining a diversification of products that are adapted to local communities.

Starbucks should provide a special drink based on taste, preferences, style, design and name o the coffee.

This solution can attract new customers and can be linked with a specific marketing campaign that finds a balance between the global image and the local community. Even though differentiation can be risky, an emphasis on new experience will be necessary in the long run to escape competition (e.g. the introduction of music bars in Europe) and project to the world that they are well aware of the existence of other countries cultural preferences and tastes.

Negative overall press coverage was partly the result of United States policy and Starbucks should try to “escape” from the political aspect by promoting itself as an international company rather than a US company. Separating themselves from the American image can be a danger, but they will have a more local image, by introducing local culture in their stores (e.g. local newspaper). In addition, Starbucks should demand fair prices from organic coffee farms and contribute to charitable causes to appease anti- globalists.

Additionally, politically unstable countries should affect their decision to enter new markets. A test-store should be opened to try whether the local perception of citizens can be changed and if local government support the company.

Starbucks should continue to buy “fair trade” (grown and marketed under certain economic and social conditions) coffee beans as it enhances its social responsibility worldwide and give an image of tolerance.

Furthermore, loss making stores should be closed (as previously done with joint-ventures in Switzerland and Austria) and when expanding, cultural differences need to be taken into account. Price setting as to currency fluctuations (American dollar being very low) is very important to be able to maintain the worldwide demand and maintaining customer loyalty (they currently use a method called Currency risk management to manage the currency fluctuations in different countries).

Furthermore, one of the main problems faced was competition and Starbucks need to be careful that prices do reflect the global trend. At the moment, people are willing to pay that extra more for the brand and Starbucks should keep it that way, decreasing feelings that they overcharge their customers.

A solution can be for the company to open subsidiaries or base their company in countries where they have a lot of stores, resulting in generated profit for the subsidiary and thus basing the price on an individual country.

It is important for Starbucks to further develop its global image, bearing in mind that change in taste will occur and a remodelling of the image may be necessary.

Still, Starbucks will need to remain focused on where the company is good at, such as being the best coffee provider and offering a good atmosphere. Starbucks should expand on the basis that they are selling superior quality coffee on the taste and preferences of the world, not only the United States preferences.

Customer loyalty is very important, and while trying to expand internationally, high customer service should remain. Some of the methods used in America were proven to be successful and the World market may benefit from some features. An example can be direct-to-customers method of selling products through internet to support its retail expansion into new markets and reinforce brand recognition in existing markets. 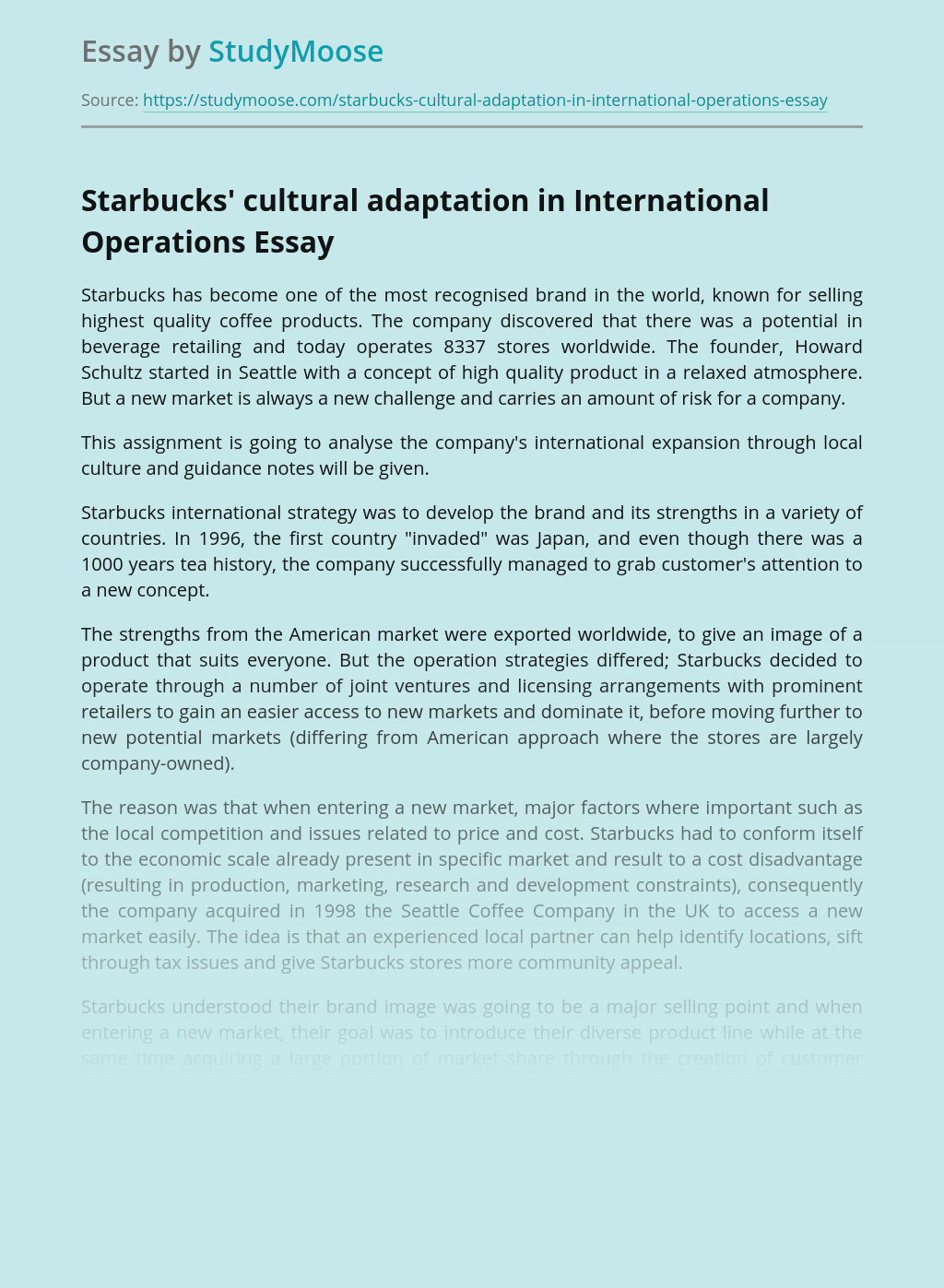 Turn in your highest-quality paper
Get a qualified writer to help you with
“ Starbucks’ cultural adaptation in International Operations ”
Get high-quality paper
Helping students since 2015
Stay Safe, Stay Original