Standard Deviation use in the Business World

This paper evaluates the role of standard deviation in business. As part of the evaluation, a brief summary of five different peer reviewed papers has been presented. Topics such as, the purpose of the study, the research questions, the hypothesis of the study, and the main findings of the study for the five papers, have been summarized by each of the learning team members.

Standard Deviation use in the Business World

Standard Deviation is a statistical measurement that shows how data are spread above and below the mean.

Don't use plagiarized sources.
Get Your Custom Essay on Standard Deviation use in the Business World Just from $13,9/Page

The square root of the variance is the standard deviation (Cleaves, Hobbs, & Noble, 2012). It plays a key role in business management, with one of its benefits being that it simplifies the determination of variability in a given symmetrical data set. In this paper, the role of Standard Deviation in business has been presented by means of summarizing five peer-reviewed papers.

In order to understand the role of standard deviation in business world, the first paper reviewed is on the topic ‘Risk: An uncommon deviation’, by Scott, D (2006).

Standard deviation has a critical role to play in evaluating the risks involved in the field of business investments. Below is the summary of the findings from the paper:

The key questions discussed within this paper are

The hypothesis used in the paper is that the risk in the real world includes a set of situations and outcomes that no model can ever capture and no statistic can ever express. However, the usage of standard deviation can possibly help in building a more predictable risk management strategy. Findings of the study

Below are the findings of the study

1. Standard deviation can help in predicting many of the possible risks, but there will always be rogue risks, which are very hard to predict. Risk that can be modeled mathematically is only part of the risk. However, standard deviation can help in greatly enhancing the traditional risk evaluation models, since most of the times the performance outcomes stay within the realms of a normal distribution (Scott, 2006). 2. It is essential to diversity the risk management techniques used. According to Scott (2006), it is essential to pay attention to correlation coefficients, covariance matrices and other statistical analyses by all means, but also assess the actual financial exposure to any one issuer, economic happening or institutional structure. 3. Challenge those whose professional training encourages them to equate risk and standard deviation (Scott, 2006).

The purpose of the study is to investigate if there is increase in volatility of stock prices following annual earnings announcements. The study is using implied standard deviations (ISDs), which are derived from option prices to establish the day-by-day changes in volatility within the announcement period. The focus is primarily on the timing of the volatility increase, rather than on the level of increase.

The conditions of changing volatility, the ISD of an at-the-money option can be interpreted as an estimate of the expected standard deviation of the return over the life of that option, and can therefore be used to analyze the pattern of volatility, which the market expects to occur around an announcement. Announcements of earnings per share (eps) figures with a high transitory component, whose implications for the future are more difficult to assess, should be associated with a delayed volatility reaction.

Findings of the study

1. If the day of the of the anticipated volatility increase is known, then by measuring the ISD at two points before that day, the `basic’ volatility and the amount increase can be deduced. 2. The ISDs tend to rise before the announcement date and fall after it. The day 10 ISDs suggest that volatility rises again roughly two weeks after the announcement. 3. Announcing bad news and announcing news that is difficult to interpret both have an incremental effect on delaying the volatility reaction, but the effect of bad news appeared to be dominant. 4. Companies reporting bad news deliberately convey less precise information, thereby extending the period required by the markets to analyze its implications. 5. When there is no news, ISD and hence volatility did not appear to change significantly around the announcement.

The third paper chosen is titled “Forecasting the pulse: How deviations from regular patterns in online data can identify offline phenomena” by Andreas and Pascal (2013).

With steady increase of data availability of human behavior collected through online social services, there is a big potential for data scientist to leverage standard deviation as the tool to conduct real time detection and analytic studies of extraordinary offline phenomena. Such detection helps build foundational marketing opportunities for social commerce.

1. Does communication environment (i.e. facebook, twitter, match.com) has its normal state of user behavior? 2. Is there seasonal trend in the patter? How big are the variations? 3. What is the dynamic empirical state base on the historical data pattern? Do large deviations detected between system states versus empirical state work as indicators of user’s offline phenomenon?

Large deviations between the states of the social platform as forecasted by the empirical model can be used as indicators of extraordinary events, which led users to deviate from their regular usage patterns.

Studies launched on Twitter base on historical usage in 2011 – 2012 concludes that each social platform has its own variable of usage pattern that is specific to individual user. The normal state of communication environment can be measure by specific variables in the data documenting the user behavior online. After removing the seasonal trends, statistic model can determine the large deviations between the state of the system as forecasted and the empirical state. These large deviations are later validated as truly extraordinary events that led the users to deviate from the normal usage patterns (Andreas & Pascal, 2013). These variations act as predictors for the social companies to proactively launch market campaign to target audiences.

The fourth paper chosen is titled “Standard deviation of anthropometric Z-scores as a data quality assessment tool using the 2006 WHO growth standards: a cross-country analysis”, by Mei, Z., & Grummer-Strawn, L. (2007).

Worldwide nutritional status of population can be measured using height and weight anthropometric indicators. In 1978, World Health Organization (WHO) indicated that the Standard Deviation of the Z scores of these indicators remains relatively constant across population, irrespective of nutritional status. In 2006, WHO published new growth standards and purpose of study is to find whether above standards can still be used to access data quality.

1. Are previous measures of Z scores calculation still applicable to measure worldwide nutritional status of population? 2. Can nutritional status, especially in children, from both developed and developing countries, be used as international references? 3. Will Z-score rages still apply to data collected after the application of 2006 WHO growth standards?

Available Demographic and Health Surveys (DHS) represent nationally and contains large sample sizes. As these surveys are supported by United States Agency for International Development (USAID), they can be used authentically and contain wide range of monitoring and impact evaluation indicators. As per 51 DHS surveys obtained, 32 were from 23 African countries, four from three Asian countries and 15 from eight Latin American countries. The Z scores were obtained for height for age, weight for age, and weight for height and body mass index for age. For all these four indicators, Z-score in Latin American countries were higher than in African and Asian countries, even though the Standard Deviation for all the three indicators were relatively stable and did not vary much with the Z-Score means.

Standard Deviation use in the Business World. (2016, Sep 16). Retrieved from https://studymoose.com/standard-deviation-use-in-the-business-world-essay 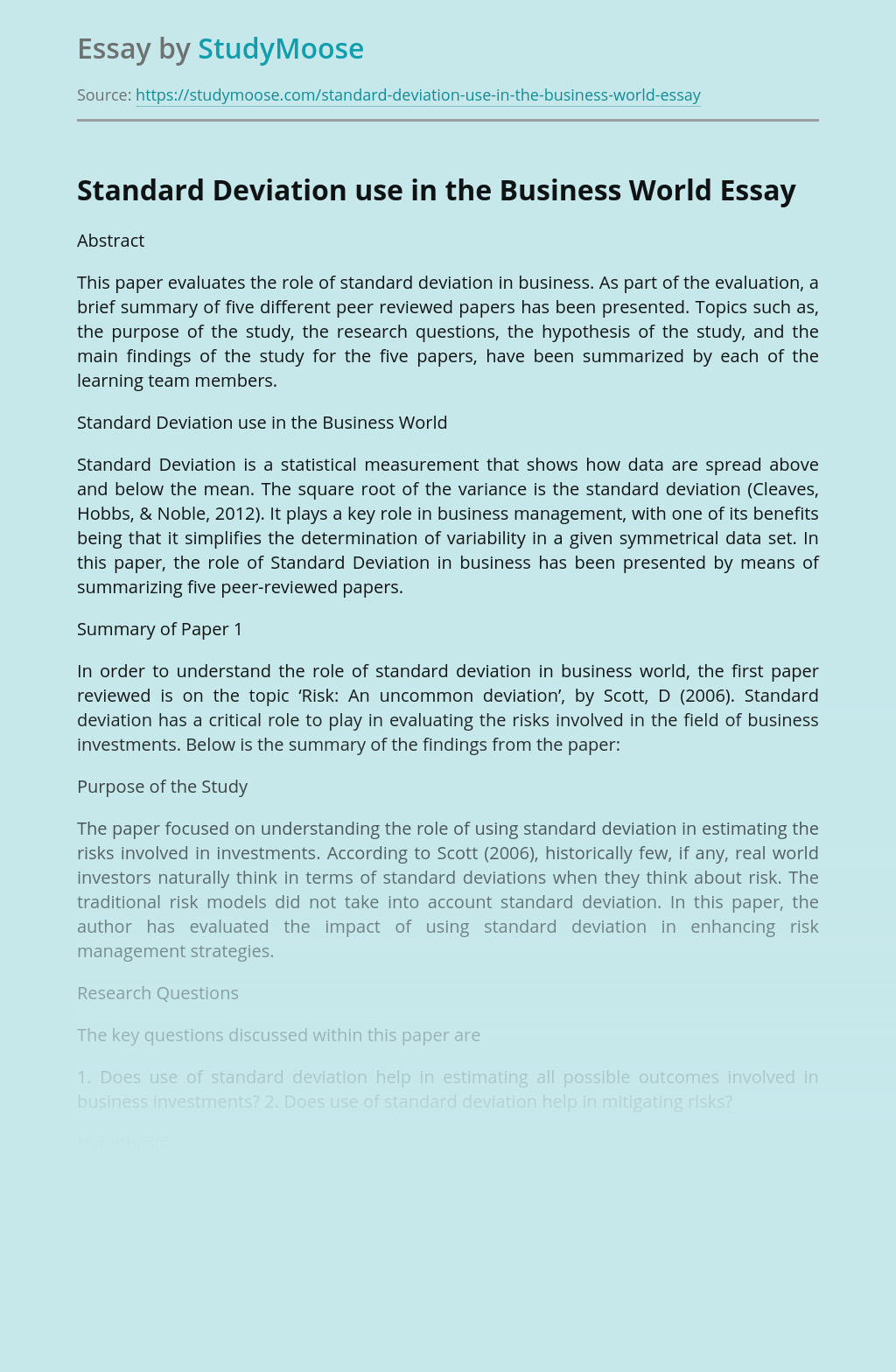 This paper is based on case study on operation management and positioning strategy of Zara, one of the world’s fastest growing manufacturers of fashion clothing. Also a world leading fashion retailer brand of Inditex. The case study outlines how Zara transforms from a local clothing retailer it into a global successful brand. It addresses few...

A business proposal on direct marketing in social media

Get Essay
European Colonization During The Scramble for Africa