The sociological imagination is a term created by C. Wright Mills. It refers to the ability to differentiate between “personal troubles and social (or public) issues” (Murray, Linden, & Kendall, 2014 p. 5) as well as being able to understand how they can be linked to one another. For example, a depressed individual can be considered a personal problem, but if the perspective is changed to a broader view, it can be observed that depression among many people is a major issue for society as a whole.

Turn in your highest-quality paper
Get a qualified writer to help you with
“ Sociological imagination by C. Wright Mills: Explanation ”
Get high-quality paper
NEW! AI matching with writer

The sociological imagination allows one to see that there may be a more serious cause of this issue, rather than just one person being ill. It allows us to see how personal troubles can be “placed into a larger social context” (Murray et al. , 2014, p. 6) so that we are able to get a better understanding of the origin of a problem. Mills states, “Neither the life of an individual nor the history of a society can be understood without understanding both.

” (C. Wright Mills, 1959, p. 1) Without being able to change our perspectives from one view to another, we would not be able to fully comprehend everything happening around us.

One important aspect of the sociological imagination is the ability to recognize how society affects individuals. (C. Wright Mills, 1959, p. 2) For example, changing the way one speaks at school to ‘fit the standards’ displays how society has shaped individuals. The sociological imagination can be seen as fitting the conflict theory perspective as social arrangements benefit some groups, but hinder others. (Murray et al. , 2014 p. 25) Also, Mills explains that we must look at the historical changes in society to better understand the circumstances we are dealing with in the present.

If we do not take into consideration what we have to deal with in the past, we will not completely be aware of why we find ourselves in certain situations. (Knuttila p. 21) The sociological imagination is also important to us as individuals because in order to understand our own troubles, we must understand the greater issue or cause behind them. By understanding the reasoning behind the issue, we are able look at our own problems from a more knowledgeable perspective and determine how we could properly go about fixing them.

It is important for people to be able to relate situations in their lives to societal issues that affect them, because if not, they will not be able to tell if the issues are in fact a personal ‘trouble’ or something bigger. From the standpoint of an individual, we tend to only take ourselves into consideration thinking about where we have gone wrong without looking at the bigger picture. We do not realize that there could be an explanation of why we are having problems based on what is happening in society. (C. Wright Mills, 1959, p.

2) For example, one might lose their job and think it has only to do with personal reasons- whether they are too lazy, a bad worker, unpleasant to be around, etc. , but in reality, it could be that 10,000 people in the area of employment are actually unemployed because they are no longer needed. This becomes more of a social issue that needs to be taken care of. Part 2: For as long as anyone can remember, body image has been an increasingly critical issue within society. It first started out as just a personal trouble.

People were insecure about their weight and wanted to fit in with society, forcing some individuals to go on diets or start working out to obtain a more appealing body. Eating disorders started becoming more common after the 1950’s when Marilyn Monroe, the “sex icon”, had passed away. Over the years, the ‘ideal body’ has become more and more skinny. Anorexia was considered to be a personal issue at this time because not many people had made it known that they were trying to make themselves skinnier.

As soon as the media started making it clear that the ‘perfect body’ was supposed to be tall and skinny, the outbreak began. With the help of the sociological imagination, it could be observed that social factors, including media, enforced individuals to start thinking about body image a certain way. The overwhelming amount of advertisements featuring skinny models started to subconsciously manipulate individuals into wanting to look the same way. The sociological imagination can be seen as fitting the conflict theory as it benefits some individuals at the expense of others. ((Murray et al.

, 2014 p. 25) In this case, media puts skinny girls on a higher pedestal than girls who are heavier. Many men and women started conforming to the ‘ideal images’ portrayed by the media, making it clear to see the distinction that body image is not just a personal trouble, but in fact a social issue as people were all taking drastic measures in hopes of achieving the same outcome. One of the most important components of the sociological imagination is differentiating between private problems and social issues, and as Mills writes, the distinction is an “essential tool”. (C. Wright Mills, 1959, p.

4) This public issue of body image has clearly caused personal troubles, which means the society as a whole should be figuring out a way to stop this issue from becoming any worse. Body image would not be as much of an issue if the media did not put such a big emphasis on looking a certain way. Some companies have actually realized the outcome of putting so much stress on the importance of being skinny and created campaigns against it. Dove, for example, has started a campaign for ‘real beauty’ featuring models of all shapes and sizes making it clear that you do not need to look a certain way to be beautiful.

If more companies start to do this, body image would not be as big of a deal to men and women around the world. Using the sociological imagination, we are able to switch our perspectives from an individual one to that of a society, which enables us to look at different factors that influence the issue of body image. It allows us to look at the historical changes through time to determine the main cause of this issue, and how it is possible to fix it. (C. Wright Mills, 1959, p. 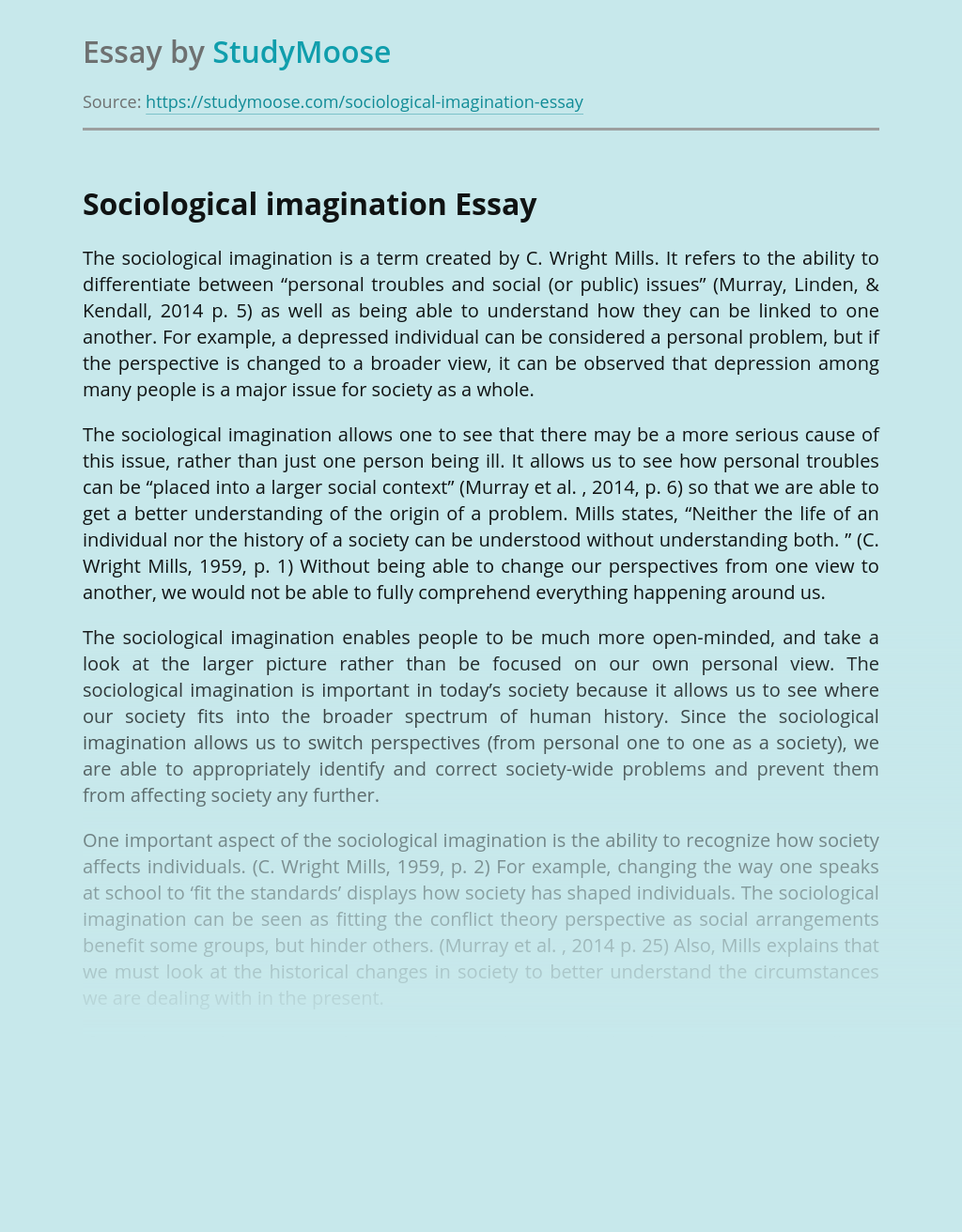 Turn in your highest-quality paper
Get a qualified writer to help you with
“ Sociological imagination by C. Wright Mills: Explanation ”
Get high-quality paper
Helping students since 2015
Stay Safe, Stay Original