Reality is not an objective thing that is imposed upon us, but is created by us. Reality does not exist externally but internally, as each individual or group interprets it, and is always changing. Due to these concepts sociologists often speak about the “social construction of reality” which is essential to understand when attempting to explain human social behavior. Since realty is the basis of people’s actions, W. I. Thomas states, “If people define situations as real, they are real in their consequences”.

Turn in your highest-quality paper
Get a qualified writer to help you with
“ “Social Construction of Reality” ”
Get high-quality paper
NEW! AI matching with writer

The “social construction of reality”, human social behavior and W.

I. Thomas’s statement are three concepts that fit hand in hand and are important when trying to explain one another. Sociologists speak about the “social construction of reality” as a way to describe the significance of how society shapes our definition of reality. People coming together to build reality and define something as real because we define it as real. As sociologists explain the social construction of reality they have observed that each society or the social groups that each person belongs to forms ones particular views on life.

Our “social construction of reality” constructs our views of how we see the world around us therefore affecting how we see reality and why we do the things we do. People construct reality using the five senses: sight, smell, touch, hearing and taste. For example, when taking a table into consideration, one does not react to the concrete object but the meaning we give it. If this same table were to fall out of the sky, land in a jungle and tribe people were to stumble across it they most likely would not use it in the same context but maybe as a bed or a sacrificial altar.

The “social construction of reality” not only applies to inanimate objects but to relationships and the basis of how someone treats someone else, such as symbolic interactionism (Essentials of Sociology, pg. 15). Symbolic interactionism such as we attach meaning to things and this is how everyone understands similar views in the world and how we communicate with one another. This is evident when one dissects the idea of the enslavement of Africans, known as the “white mans burden”. Whites defined blacks as less than human, savages or creatures that could not survive off of their own minimal cognitive reasoning.

This understanding was the basis of slavery. Another example is the idea of marriage and divorce, and how the institution is ever changing. Up until the early 1900’s marriage was viewed as a lifelong commitment, divorce was “taboo” and shunned as being immoral and the abandonment of adult responsibility. In 1945 sociologists Ernest Burgess and Harvey Locke noted that couples were looking at marriage as less of a lifelong commitment and more of an arrangement that was based on attraction and feelings, it became a situation that could be broken when feelings changed.

Divorce became more common and was defined more positive as freedom and new beginnings (Essentials of Sociology, pg. 16). An example of another “reality” is how from person to person there is no true definition of success. The letter grade “B” brings on different emotions depending on the individual. One student would jump for joy to pass with the “B” while others would be sad, even cry. In actuality “B” is just a shape, a letter of the English alphabet, given on paper but what the person defines it as gives it meaning to their reality, and then forget about the “+” or “-“ given accompanied with the letter grade.

Our social construction of reality defines our behavior and how we respond to the meaning that we give these situations or objects. Human social behavior is what is based off of once a reality is socially constructed. This is why it is so important to first understand the concept of the “social construction of reality” before trying to explain why people act the way they do. Because this object with four legs attached to a flat surface is defined as a “table” one uses it to eat on or sit at and not other things such as sleep on.

If an individual were to use it as something else they would be looked at as being weird because they are not doing what is socially accepted or viewed as “breaking the rules”. The concept of ethnocentrism is where a group of people tries to change another group of people to make them like them so they can “save” them for their own good. This is done because according to their social construction of reality however the opposing group behaves is “wrong”. This can be seen throughout history for example the crusades, as stated before the “white mans burden” in Africa, and the war in Iraq.

During the days of slavery, treating a black individual maliciously was socially accepted because of the way reality was constructed. The changing attitudes toward marriage and divorce are evident when one looks at the trends. Marriage is not viewed the same as it was 100 years ago; it is not necessary to be married forming a family by age 15. This concept of social construction of reality also explains why patterns form and how people can develop similar behavior without having to know each other.

On the streets of New York good sidewalk etiquette is defined as passing another person on the right, walking far enough not to brush the other person ,if one can help it, and ensuring not to look at the person when walking by. However, when any of these rules are broken it makes the other individual uneasy or even angry. But these unwritten rules aren’t necessarily the same in different parts of the world, for example in London it is socially correct that if you are walking towards and passing someone else that you part ways on the left side.

Other areas where unwritten rules exist are in elevators, such as where and how to stand, and also seen in face-to-face conversations, such as eye contact and distance something known as “personal space”. Ones views for what is right from wrong also comes from the foundation on what one defines as real. W. I. Thomas’s quote, “If men define a situation as real, its real in its consequences” correlates directly to the idea that human social behavior is based off of the “social construction of reality”.

Thomas is analyzing that reality is a social product that is construed by whatever we define as real. Humans do what they do and react solely by the meaning we give things and not the things in and of itself. This is why money, gold and diamonds are “valuable”. Money is simply made of paper but because it is defined as currency we make it out to be very valuable. To better understand this notion one can take note of our system of crime and punishment, which is based off of W. I. Thomas’s thoughts.

When the jury makes a decision, they are deciding on what they perceive as reality. They do not know exactly what happened but from witnesses and evidence they make this judgment. W. I. Thomas’s idea is significant in the study of human social behavior because it further proves that human actions are based off of the reality that something is true. This is why what is defined as “normal” varies from culture to culture and the decided meaning to an object or action is arbitrary. The “social construction of reality”, human social behavior and W.

I. Thomas’s quote, “If men define a situation as real, it is real in its consequences” are concepts that compliment one another. To be able to understand fully, one must be able to comprehend all concepts. When sociologists speak about the “social construction of reality” through the groups that we belong to we learn ways of looking at whatever happens to us and what we see because through social interaction is how we construct reality and from that point on is how we behave and respond.

It’s not a question of which came first the chicken or the egg, because in the eyes of sociologists human social behavior is caused by the “social construction or reality” and W. I. Thomas’s statement is an abridgment of these concepts explaining men’s definitions of situations given the meaning of what is what or who is who. It doesn’t matter what is real or not, what does exist or not exist, because we give meaning or “consequences” to this reality that has been portrayed and instilled in our minds. References Henslin, J. M. 2011. Essentials of Sociology: A Down-to-Earth Approach-9th edition. Pearson. 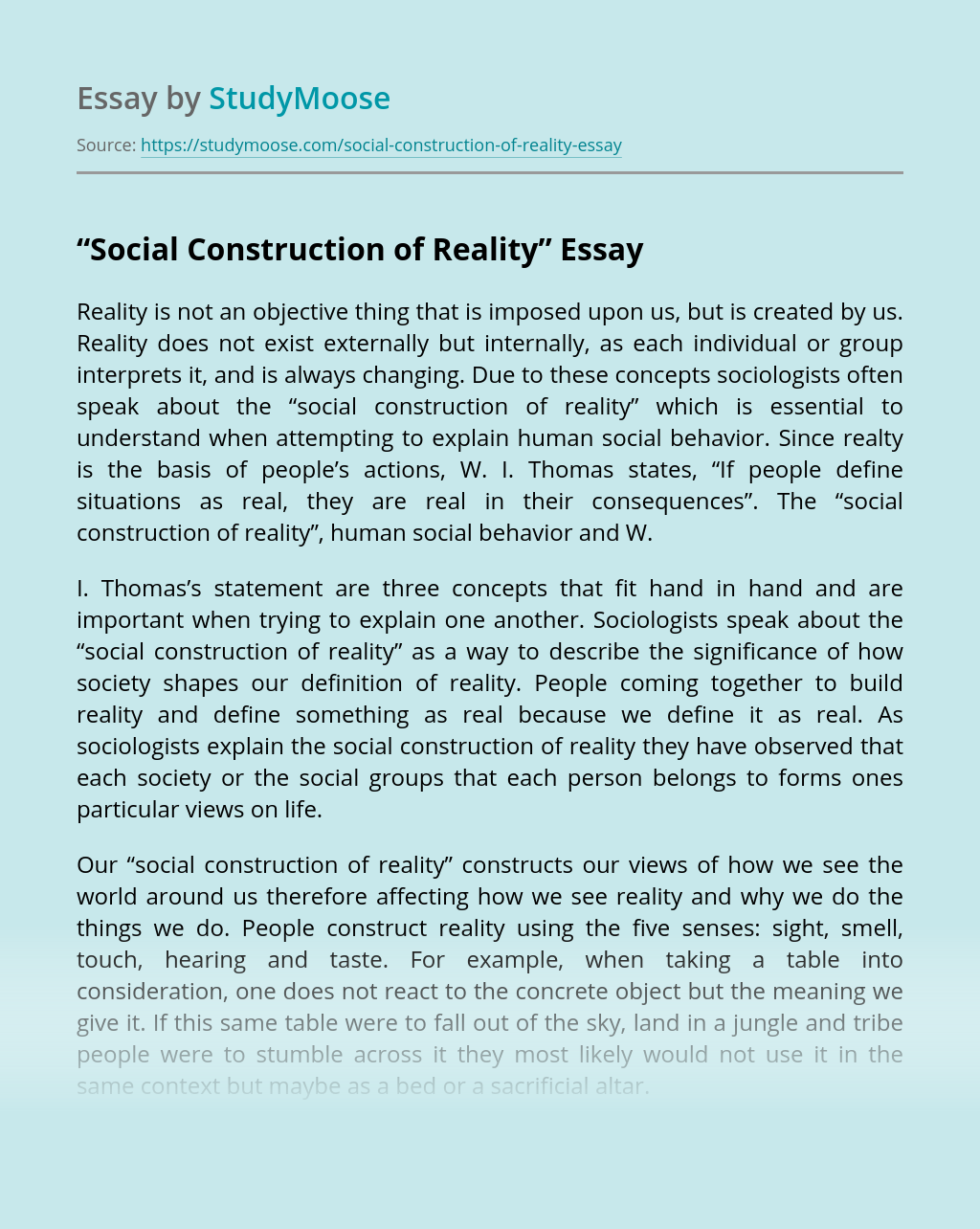 Turn in your highest-quality paper
Get a qualified writer to help you with
“ “Social Construction of Reality” ”
Get high-quality paper
Helping students since 2015
Stay Safe, Stay Original