The Social Learning Theory by Bandura states that individuals learn from each other through observing, imitating and modeling. His hypothesis bridges characteristic and cognitive knowledge assumptions as it entails attentiveness, memories and inspiration. Banduras theory is demonstrated in the Glass Castle by Jeanette who is the antagonists in the commentary. The glass castle’ affirms that perseverance is a trait inside everyone in spite of their background. Jeanette Walls authored The Glass Castle, an autobiography founded on her unorthodox and commonly troubling childhood resonating deeply with Bandura’s theory of cognitive learning.

Don't use plagiarized sources. Get your custom essay on
“ Social Cognitive Theories on The Glass Castle ”
Get custom paper
NEW! smart matching with writer

Jeanette’s memoir reveals how some people show resilience even in the worst environments by using Jeanette as the lead character.

Jeanette born in Arizona with her life characterized by a depressing childhood lived in semi-permanent homes and at times was homeless as the family moved across different states seeking shelter and a way to earn a living. His father was an alcohol addict and used the little money the family got to go to his drinking sprees.

In a special way, Jeanette does not use thwacks in describing her dysfunctional family and they afflictions the children went through. Despite her painful childhood experiences, Jeannette does not ignore her happy moments and the lessons she learnt. Her father might have been an addict but she still acknowledges the lessons she learnt from him. In her description, it is evident that she is resilient enough to embrace even the tough times she endured and does not shy away from speaking about her family.

Her biggest source of inspiration is her endurance, the resilience to courageously face the low moments in her child, the capability to find something positive about it, to describe the lessons she gained and to match ahead stronger. Without the resilience (Wall, 2009) the situation of her poor family and her drunkard father would have broken her down. She says

At four years, Jeannette manages to crawl by the roadside like Bruce Willis. This was following a detonation in a movie. This goes a long way to show how her resilience is inborn, she learnt to survive at a very young age and not be weighed down by things.

I crawled along the railroad embankment to the road and sat down to wait for Mom and Dad to come back. (2.6.15)

This demonstrates that interpersonal as well intrapersonal cognizance play a crucial part in developing self and character. Jeanette knows what he has to do and her mother also shares the same opinion. Generally Jeanette’s family has been brought up under a lot of resilience, the children had to endure so much in their life, and they looked up to each other for strength to keep pushing and used their challenges as learning lessons. Among the obstacles they faced were lack of a permanent home as they had to move across different states trying to survive. The parents did not have any stable jobs and lived from hand to mouth with the father worsening the situation by drinking alcohol the the little cash they got. The dysfunctional family was also another obstacle to living a good life as they parents were mostly not able to help their children in their financial needs or give emotional support. At three years old, Jeanette was seriously burnt as she was preparing hotdogs and the caregiver inquired the reason behind her cooking yet she was just a small girl and she says;

Precisely, at such a young age, she knew she needed to be autonomous and she had to cook if she was to eat (Walls, 2009). Her siblings learned to survive in their neglected state, and developed perseverance. This resonates with the social cognitive theory by Bandura which asserts that children learn from one another by observing, imitating and modeling. In this case Jeanette had observed how her family was, their challenges, and the parents’ character and learnt how well to adapt by being resilient.

Carver in his research exploring the contrive of family perseverance explained as a family multivariate that makes the family to outlive main obstacles and as a survival element that makes it easy for people to deal with depressing situations and overcome challenges (Carver, 1998). Caregivers taking care of patients who were victims of a main plague in Singapore were used as the subjects in analyzing family resilience stated that many patients identified family unity, social connections, positive perception of situations and embracing change as some of the factors that enabled them to deal with challenges effectively and remain resilient despite being affected by the epidemic. His research findings echo well with Banduras theory and the portrayal of Jeanette in the Glass castle.

Lehman Mellissa in DSS 100 iBook, chapter three tries to give explain more about Social-Cognitive Learning Theory by Bandura through analyzing the variables of reciprocal antecedent and individual concern, anticipations and personal-ability, modeling and individual-control. Lehman, from the social cognitive view, seeks to demonstrate that personal ideologies of efficacy are as an element of personal traits and its competence forecast. He asserts that the points of view individuals have regarding themselves shape their thinking, feelings and actions. The opinions people have regarding their abilities determine their social conduct through the cognitive, inspirational and productive procedures through preference which define the person’s life based on the environments they prefer. Discerned self-ability influences the living objectives, the goals of success and decision-making which is significant in self-regulation of social characteristics, result anticipations and objectives.

The self-efficacy acuities develop from information that is diligently, enthusiastically and psychosocially dispatched. In one of his researches, Lehman explains the social setting on women’s health traits through illustrating the enormous impacts of self-efficacy and concludes that self-efficacy is an important element for resilience in women’s health and helps in comprehending the health behavior and creation of curative strategies. Perceived self-efficacy according to Lehman is a self-controlled process that is generated reflective actions that are key to human modification and comes about as an association between awareness, the environment, and response. Just like Jeanette’s memoir, the works of Lehman in DSS 100 iBook, chapter three assert that self comes about as a result of interrelationship between cognitions, the habitat, and character.

Carver notes that self-efficacy is an important factor of resilience and reflects the ability of positive adaptation and denotes maintenance of healthy standards of operations and the capability of people to function and adapt well to different environments.

Jeanette in The Glass Castle and Lehman prove that one’s resilience is shaped by associations between cognitions, the habitat and reactions. Some people shoe perseverance even in challenging environments. Their views are supported by Carvers research which confirms that positive p-perception of situations and environments as well as embracing change define ones self-efficacy and resilience. 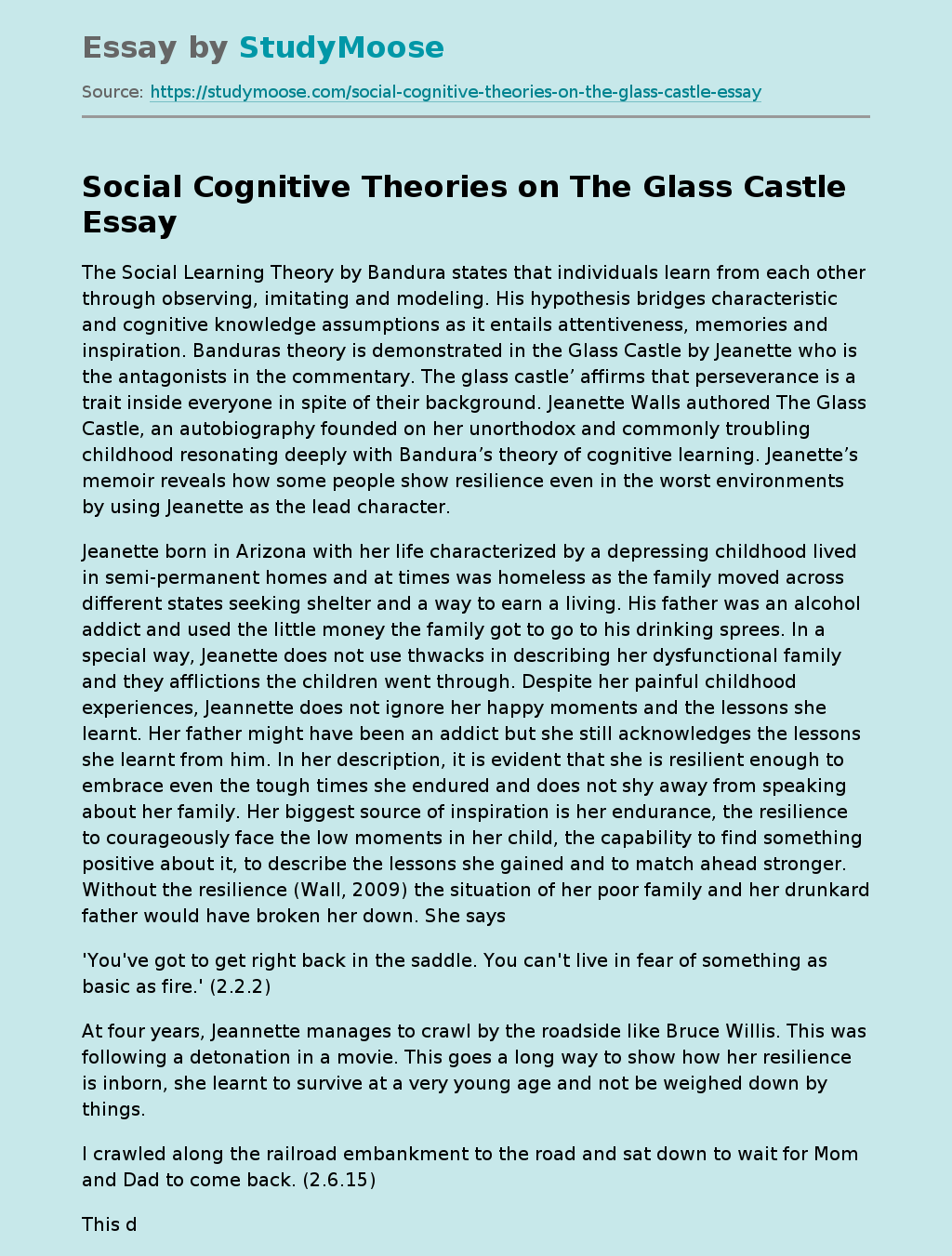