Smoke Signals portrays the some of the problems Native American Indians have had to deal with over the years. The main character is a young Native American teenage boy, Victor Joseph, (Adam Beach), and how alcohol affected his life and relationship between him and his father, Arnold Joseph, (Gary Farmer),. This story brings to light the custom of storytelling by the Native American’s. Story telling is used as narration by another character, Thomas, (Evan Adams). These stories by Thomas prompt flashback memories and explain the nature Victor and Thomas’ relationship and how it formed from the time they were infants.

Don't use plagiarized sources. Get your custom essay on
“ Smoke Signals ”
Get custom paper
NEW! smart matching with writer

Victor and Thomas set out on a road trip to Phoenix to retrieve Victor’s fathers remain after his death and during this journey Victor learns to come to grips with his anger issues towards the fact of how he has felt cheated of out a Father and having to deal with the loneliness and anger growing up.

This story begins with a 4th of July party at Thomas’ parents house.

Victor’s father, Arnold, an alcoholic, was celebrating and everyone had passed out at the house. He decides to light fireworks in the house and the house catches on fire. Arnold starts to run away when he remembers Victor in the house asleep and he goes back for him and he grabs Thomas as well. However, Thomas’ parents parish in the fire that night. Thomas was taken to live with his grandmother who deems Arnold as a hero and he tells her he didn’t mean to be a hero.

What he wasn’t telling her was that he started the fire. All the guilt he now has from that night has only made his drinking problem worse. Arnold feels ashamed and less of a man and therefore cuts his long hair something of which represented his culture proudly. Arnold never grows his long hair again. Him and his wife both drank until one day when Victor was around 9 or 10, maybe a little younger, his mother notices him throwing rocks at the tailgate of their truck. She knows he is filled with anger due to the massive drinking by her and her husband.

She decides then they had to stop for his sake. Arnold didn’t want to give it up so he decided to pack a suitcase and leave and his wife told him if he left for Phoenix not to ever return. Now Victor is left alone with his mother in Idaho’s dismal Coeur d’Alene Indian reservation and has his memories of hate towards his father for being an alcoholic and always trying to talk with his fists. Thomas’ character calls attention to the significance of storytelling in the Native American culture. Thomas seizes every opportunity possible to tell his stories. His stories are very significant to this story because they are like flashbacks that tell highlights of the past that are very important to the story plot. Most of his stories are in reference to Arnold and this annoys Victor. Thomas never realizes this and could never understand why Victor was always mean to him. Victor is resentful because Thomas has better memories of his father than he does.

Victor always thought that his father treated Thomas better than he did his own son. Victor’s mother receives a phone call that her ex-husband had passed away and that someone needs to come and get his ashes and possessions. Victor has no money to make the trip to Phoenix so Thomas offers to pay for the trip as long as he can come too. They board a bus and head out. On the bus trip the encounter two white men who took their seat and would not give them back and told them to go set in the back where they belong. At this point Victor tells Thomas that the only way that white people would respect them is by being serious; showing no feelings, not even a smile, being a warrior. The story is displaying how the white man has always felt superior to the Native American’s. They arrive in Phoenix and soon meet his father’s friend Suzy.

Suzy told Victor many nice things about his father. She also told him of Arnold’s fears, but Victor had no desire to express any concern for his father. Victor was hiding behind a stern persona to conceal his emotions. Suzy finally talks Victor into going in his father trailer to see if there was anything in there he wanted to keep. Victory and Thomas leave the next morning without even saying good bye to Suzy. Thomas didn’t like this fact but he went on with Victor. While still in Phoenix on the road they were involved in an accident. The accident was the fault of a white man who was drunk. The white man blamed the accident on the two young Indian men.

The police were waiting at the hospital for the release of Victor and took them into custody. Down at the police station they were questioned and told of being accused of the accident. They were able to explain and were released. However, this is another prime example of how the white man treats the Native American’s as though they are less than and low life savages not worthy of the same justice as the white man. This movie transpires a lot about the life on the Native American reservations and traditions, especially the oral tradition. It shows the importance of storytelling in Native American tradition and it also touches on the injustices inflicted upon them by the white man. Most of all, the movie shows how alcohol has touched the lives of the Native Americans. 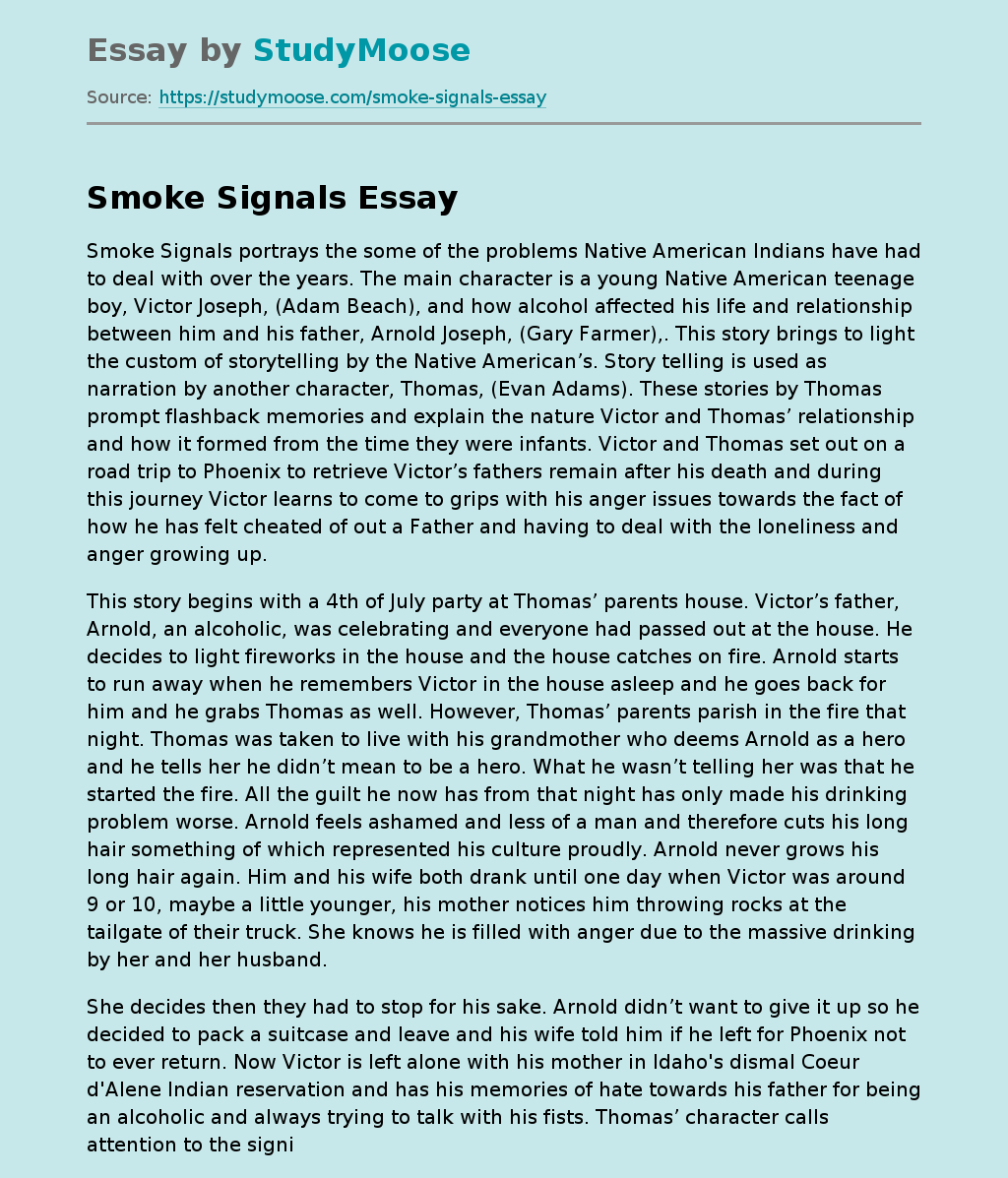