Slavery Issues in The Witness by Anne Porter

Anne Porter’s The Witness is an interesting tale about a former slave who was struggling to find his new identity in a world that was not so quick to forget about the past. He was looking to let go of the past, but the scars made him come off as angry and difficult to deal with. The meaning of this story is that the time following slavery was a difficult one for all involved, as people like Uncle Jimbilly did not know how to act and those around him were not sure how to treat him either.

Don't use plagiarized sources. Get your custom essay on
“ Slavery Issues in The Witness by Anne Porter ”
Get custom paper
NEW! smart matching with writer

The narrator of the story is a person who is both close to Uncle Jimbilly and in a position to interpret his strange behavior. The narrator has knowledge of both the family and of Uncle Jimbilly, so he serves as the perfect go-between in explaining the interesting dynamic. This can clearly be seen in the final paragraph, when the narrator describes the many reasons why Uncle Jimbilly never took action on some of his threatening statements.

He’s a cynic of sorts.

In some ways, Jimbilly’s young audience is a significant indicator in this story. Though he is no longer a slave, he still is not communicating with older people. This seems to add to Jimbilly’s frustration, as he feels that he is being disrespected in some way. This is also significant because it forces the story to explain some of the background of the slavery period for the purpose of educating the children.

The children who are in the story are not actually Jimbilly’s nieces and nephews. Rather, they are children of the family that he serves under and he simply considers them to be nieces and nephews. It is easy to see this in the first paragraph, when the children are described as not knowing much about the slavery situation. In addition, they also ask lots of questions of Uncle Jimbilly that make him uncomfortable. From all of those things, it can be gathered that they are not actually his children.

The tombstones that Uncle Jimbilly has to create for the family are an interesting and important piece of symbolism in this story. Tombstones are an obvious representation of death and they are a difficult thing to deal with for a person who used to be a slave. This is because of the fact that, more times than not, slaves were not given any respect when they died. They were not given a proper burial. The fact that Uncle Jimbilly has to create tombstones for mere animals is something of a slap in the face. It is a reminder that society accepts and values animals more than they did slaves during the time. This adds to the cynicism with which Uncle Jimbilly views the world. He knows things have not been right and he’s not afraid to express that.

Slavery Issues in The Witness by Anne Porter. (2017, Mar 16). Retrieved from https://studymoose.com/slavery-issues-in-the-witness-by-anne-porter-essay 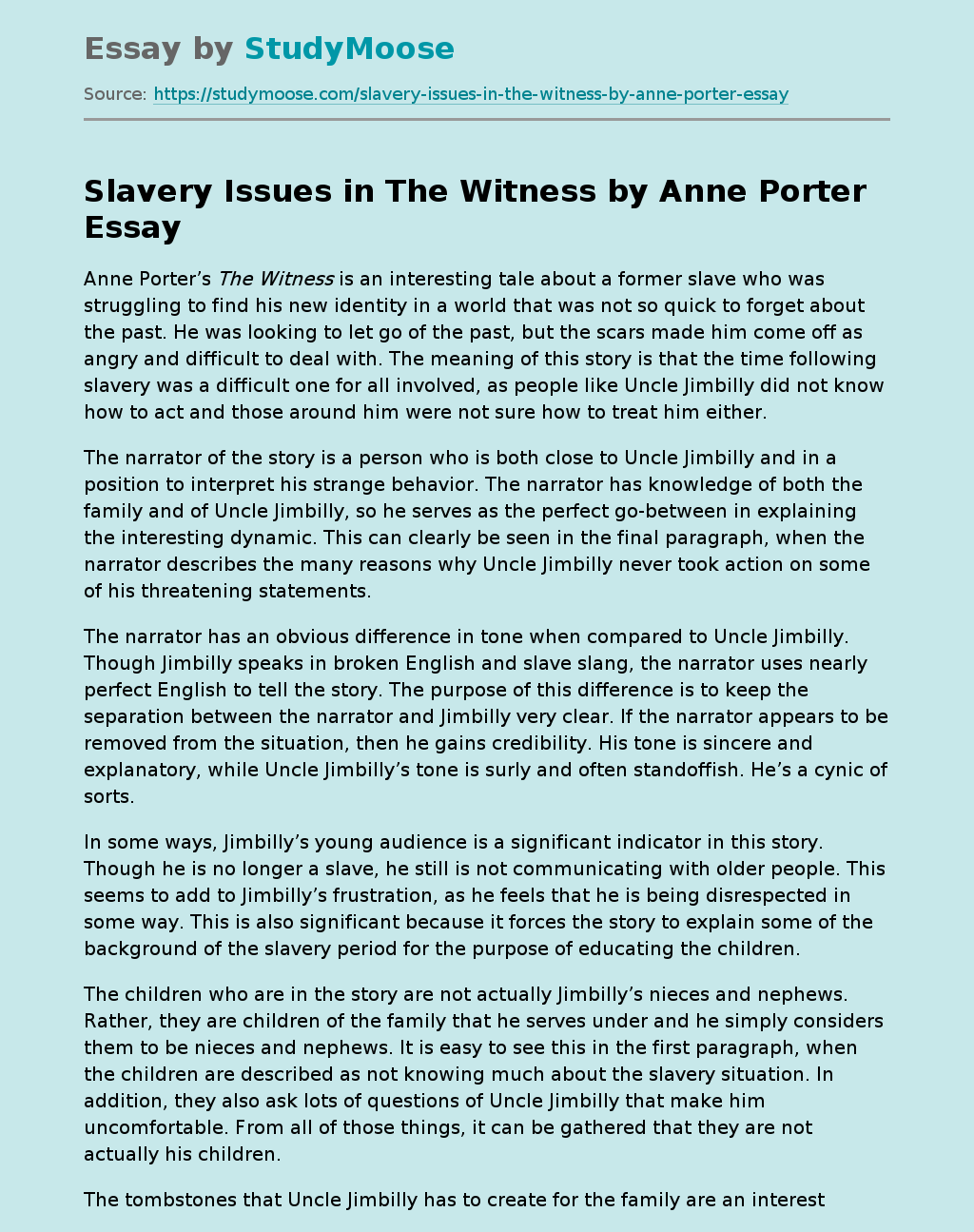