Freud also believed in three functional components of the mind, id, ego, and superego. The id refers to the body’s satisfaction and pleasure, the libido, and is the driving force behind most human behavior. The ego is also known as the “executive of the mind” is closely related to reality. The ego results develops due to the demands of the id. The superego is further development of the ego. The superego judges punishes and controls. It also dictates right and wrong.

The id, ego, and superego are in constant conflict with each other. “The id says, “I want it now!” The superego states, “You can’t have it.” And the ego attempts to compromise by saying, “Well, maybe later.” (Polan & Taylor, 2015) Fred also believed that defense mechanisms also known as mental mechanisms are ways to protect ones ego. Depending on the frequency, they can be harmful or helpful.

The different defense mechanisms are as follows; Suppression operates on the conscious level; it is described as making aware of one’s distressing feelings.

An example of suppression is “The person who just had an argument with his or her spouse goes to work and says, I can’t think about my anger while working.” (Polan & Taylor, 2015) Rationalization is widely used by all ages. It is used to justify or make excuses for undesirable actions or feelings. This mechanism prevents one from facing reality and dealing with it. An example of rationalization is blaming someone else for your failure. Identification takes on the personality traits from another person usually one held in high esteem. An example of this is a boy assumes the masculine characteristics that he admire in his father. Sublimation channels or redirects unacceptable impulses into socially acceptable outlets. Sublimation is often used as a positive effective coping mechanism

. Regression is a mental mechanism in which when one is facing a conflict returns to an earlier developmentally secure stage. An example of this is “The previously toilet-trained young child facing the stress of the birth of a new sibling starts having accidents and wetting the bed.” (Polan & Taylor, 2015) Denial is used on the unconscious level; it is used when one is unexpectedly confronted with unbearable news. Displacement transfers emotions associated with a person or object to another less threatening person or object. An example of displacement is “When you express your feelings to a substitute target because you are unwilling to express them to the real target.

The feeling expressed to the substitute target are based on your negative self-concept about the real target and yourself in relation to the real target. That is, you think poorly of someone and of yourself in relation to them.” (FitzMaurice, 2018) Projection is known as the blaming mechanism. Many reject unacceptable thoughts or feelings and attribute them to another person. Compensation is someone who makes up for deficiencies in one area by excelling in another. Undoing is an individual attempt to make up for something that is unacceptable. Reaction Formation, sometimes-called overcompensation is when ones unacceptable feelings or thoughts are kept out of one’s awareness and replaced with opposite feelings or thoughts. Conversion converts unconscious feelings and anxiety into a physical symptom that has no basis for the complaint.

Erik Erikson was a close follower to Freud. Erikson developed eight stages that described the full life cycle from infancy to old age. He also believed that during each stage certain tasks has to be completed. Once the task is complete, it enables individuals to increase independence and feel good about themselves or others. Erikson’s stages of development include Infancy (birth-18 months) Trust vs mistrust. During this stage, infants develop a basic trust in the mothering figure and be able to generalize it to others.

Early childhood (18 months-3 years) Autonomy vs shame and doubt. During this stage, the child begins to gain control over his or her body to develop a sense of autonomy. Late childhood (3-6 years) Initiative vs guilt. The major developmental task is to develop a sense of purpose and direct one’s own activities. School-age (6-12 years) Industry vs inferiority. During this stage, children develop many new social and physical skills. They also strive for recognition. Adolescence (12-20 years) Identity vs role confusion.

During this stage, transition happens between the childhood phase and adulthood. Young adulthood (20-30 years) Intimacy vs isolation. This stage allows the establishment of meaningful relationships with another person. Adulthood (30-65 years) Generativity vs stagnation. “Erikson defines generativity as the process by which a middle-aged person focuses on leadership, productivity, and concern for future generations. Stagnation occurs when a person is unconcerned with the welfare of others and is preoccupied with himself or herself.” (Polan & Taylor, 2015) Old age (65 years-death) Ego integrity vs despair. During this stage, one’s life experiences are review. Ego integrity is achieved when one is able to accept past choices.

Jean Piaget’s concern was with children developing thought processes and acquiring intellect. Piaget believed there are three major components: schemas, assimilation, and accommodation. “The term schema refers to patterns consisting of a number of organized ideas that grow with a child’s experiences. Assimilation is Piaget’s second concept, which can be described as the ability to absorb new information into the existing schemas. Accommodation, which occurs with new experiences that no longer fit or can be assimilated into existing schemes.” (Polan & Taylor, 2015) Piaget also believed that a child’s cognitive development progresses through four phases: sensorimotor, preoperational, concrete operational and formal operational.

Abraham Maslow described human behavior resulting by need. He arranged them in the hierarchy. With the bottom level being physiologic – adequate oxygen, food and water the second level safety – feeling free from danger and risk, secure in one’s own environment, the third level love and belongings – feeling worthy of affection and social support, the forth level esteem – feeling competent strong self-worth, and the top level self-actualization – meeting one’s full potential. Maslow believed the most basic needs are psychological, which includes the need for food, water, sex, oxygen. Maslow also states that before the next level of safety can be met the psychological needs must be met first. To belong is to be loved and accepted by another person. Love begins at birth with bonding and continues throughout development.

Self-esteem is feeling good about one’s self. “Self-esteem is first built by parental approval and acceptance.” (Polan & Taylor, 2015) Self-actualization is also known as self-fulfillment, this is achieved when a person achieves their full potential. Maslow believed that not everyone could be completely self-actualized. “He thought that as people continue to achieve and develop healthy relationships, they progress toward this goal. As people move toward self-actualization, they become more comfortable with themselves and who they are. At this level people are self-directed in ideas and actions.” (Polan & Taylor, 2015) 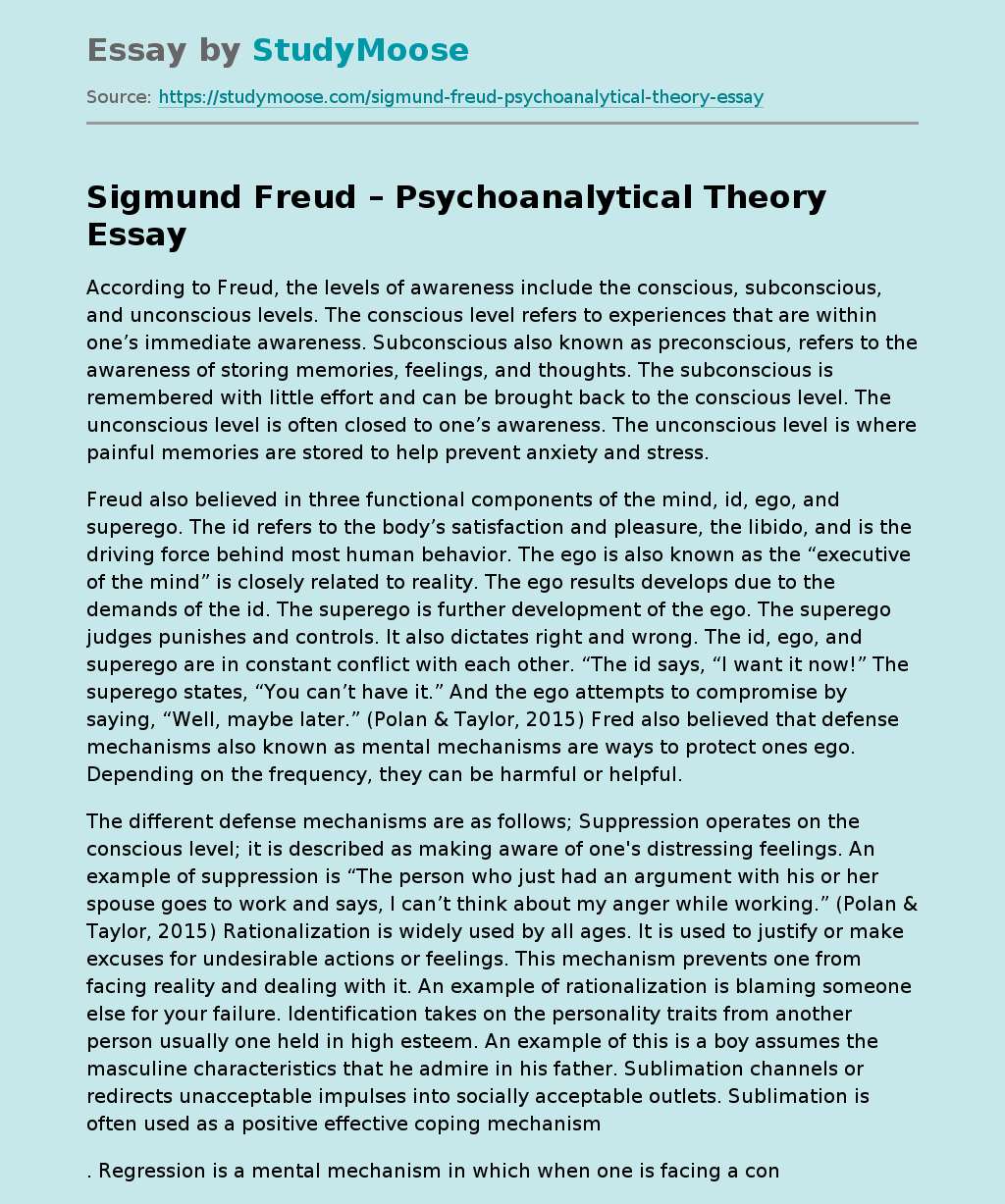