Salvadore Felipe Jacinto Dali Y Domenech was born on May 11, 1904 . in Figueras, Spain. He was a Spanish Surrealist painter and printmaker by trade. Dali is commonly regarded as having been “artistically influential for his explorations of subconscious imagery”. As an art student in Madrid and in Barcelona, Dali assimilated a vast number of artistic styles and displayed unusual technical facility as a painter. It was not until the late 1920’s however, that two events brought about the development of his mature artistic style.

Don't use plagiarized sources. Get your custom essay on
“ Salvador Dali ”
Get custom paper
NEW! smart matching with writer

In essence, the paranoiac critical meant looking at one thing and seeing another. In my opinion, this is an extended version of “the face seen in the fire.” Heads turn into a distant city, a landscape resolves itself as a still life, inexplicable combinations are seen to lurk magically beneath the skin of the world and thus the foundation for much Dali’s artistic philosophy is established. Once Dali hit on this method, his painting style matured with extraordinary rapidity, and from 1927 to 1937 he produced those paintings which made him the world’s best known Surrealist artist.

Dali depicted a dream world in which commonplace objects are “juxtaposed, deformed, or otherwise metamorphosed in a bizarre and irrational fashion”. Dali portrayed these objects in meticulous, almost painfully realistic detail and usually placed them within bleak, sunlit landscapes that were reminiscent of his Catalonian homeland.

Much of my research indicates that the most famous of these enigmatic images is probably “The Persistence of Memory” (commonly known as “Soft Watches”) which was painted in 1931. In this painting, limp, melting watches rest in an eerily calm landscape. Moving to Paris around 1928, Dali frequented the Cafe Cyrano, the headquarters of the Parisian surrealists, and in 1929, he first exhibited his own surrealist paintings. Dali continued to study the writings of Sigmund Freud and subsequently declared an ambition to “systemize confusion”. In addition to such paintings as The Persistence of Memory, other famous works such as The Sacrament of the Last Supper which was painted in 1955 and is currently on display at the National Gallery in Washington, D.C., have become widely known as part of the definitive record of twentieth century art.

In Dali’s books, of which he wrote many himself, canvases, like The Persistence of Memory seem like looking down the wrong end of the telescope at a brilliant, clear, shrunken and poisoned world whose deep mannerist perspective and sharp patches of shadow invite the eye but not the body. I doubt whether one could imagine walking on that stretched, satiny beach among the oozing watches. This atmosphere of voyeurism lent force to Dali’s obsessive imagery of impotence, of violence and of guilt. Even in his most extreme moments of anticlerical shock, however, research indicates that Dali remained a Spanish Catholic. He inherited from Spanish devotional art a paralyzing morbidity about flesh. He seemed to like anything that was not erect: running Camembert, soft watches, sagging loaves of flesh held up by crutches. Naturally all this was much more shocking fifty years ago than it is today: Dali was regularly denounced by Fascists and Stalinists alike as a decadent threat to youth.

When he could no longer annoy either the bourgeoisie or the self- appointed guardians of the proletariat, he mortally offended the avant-garde by embracing Franco and the Pope, and was duly drummed out of the surrealist group for it Dali’s reaction, natural in such an enfant terrible (approx. translation: terrible child), was to become more royalist than the King and more ostentatiously greedy than his Palm Beach and Hollywood patrons. If the net result was a tacky, phosphorescent caricature of Genius at Work, an embarrassment to most aficionados, it is still inconceivable to such eccentric art buffs that Dali the bad boy will ever be expelled from the pantheon of modern imagination. With the Spanish director, Luis Bunuel, Dali also made two surrealistic films. The first was, Un Chien Andalou ( French for ‘An Andalusian dog’) produced in 1928 and the latter was L’Age D’or (The Golden Age) produced in 1930. Both of these films are commonly described as being “grotesque but filled with highly suggestive images.”

The production of Dali’s art and films was both complimented and further popularized by his maintenance of in image similar to the one reflected in his works;: His eccentric appearance consisting ordinarily of a flowing cape, handlebar mustache, and popping eyes helped to make Salvadore Dali recognized worldwide. In the late 1930’s, Dali switched to painting in a more academic style under the influence of the Renaissance painter Raphael, and as a consequence, that was another example of why he was expelled from the Surrealist movement. In the later years of his life, Dali spent the majority of his time designing theater sets, interiors of fashionable shops, and jewelry as well as exhibiting his genius for flamboyant self-promotional stunts in the United States, where he lived from 1940 to 1955.

With some artists, death is only a ratification of decay: it releases them from the humiliations of their late careers. So it was with Salvador Dali, who when he died at the age of 84 was perhaps the archetype of that 20th century phenomenon, “the embarrassing Genius.” He was the first modern artist to exploit fully the mechanism of publicity. He appropriated the idea of the artist as demonic obsessive. He dealt with the question “Why should your fantasies matter?.” Clearly, Salvadore Dali utilized communication and all forms of contemporary imagery to make not only his works, but himself into a legend. 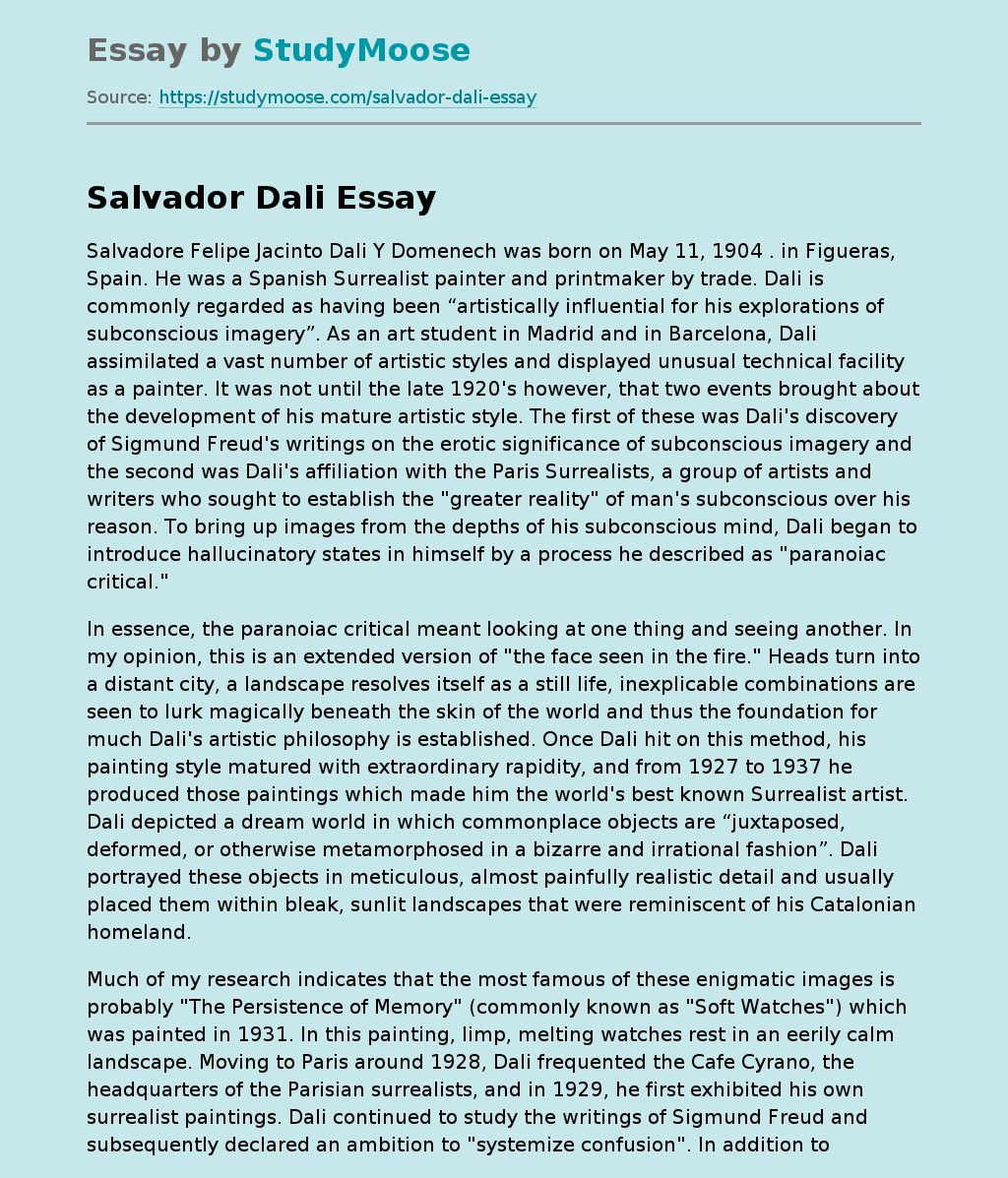