?Role of Youth in promoting Communal harmony in India

Posted by SujataParashar on March 7, 2013 in News · 0 Comments When my son was about six his classmate asked him about his religion. My son could not answer him as that was the first time someone had asked him that question. He did not know what his religion was. For that matter he did not know the meaning of the word. But he was curious about it and so after returning from School that day he asked me the same question: ‘what is my religion, Mom?’ Instead of replying to him immediately I made him sit and asked him about his day at school and during our conversation gently probed why he wanted to know about it.

Don’t waste time
Get a verified expert to help you with ?Role of Youth in promoting Communal harmony in India
Hire verified expert
$35.80 for a 2-page paper

Once I learnt the exact reason, I explained him the meaning of the term in the simplest of ways and told him that if anyone asks him about it again to tell them that; he is an Indian. He listened to my explanation, nodded quietly and left it at that.

I wasn’t sure whether my son had understood or accepted my explanation. But to my surprise I learnt that he had registered it well. And even now when he has learnt through his text books that India is a multi – cultural, multi – lingual and a multi – religious country and that many of his friends belong to different communities and follow different religions, whenever he has been asked by anyone about it, he has sincerely informed them that he is an Indian. I share the above personal experience just to highlight that the understanding and attitudes of our children (and youth) play a crucial role in shaping the future of the country.

It is important that from a young age they learn and imbibe the “unity in diversity” spirit — which is the essence of our nation.

In fact, our history is replete with examples where so many of our Kings, Emperors and even the invaders and colonial rulers divided us in the name of religious and communal differences. On the other hand, we also have countless examples of great kings who remained secular in their views and actions throughout their lives and consequently the country prospered under their rule. In fact, India has always been a land of spirituality where the beliefs and faiths of people from different casts and communities have been respected and flourished. But it is also a country which has undergone transformation several times; from dynastic rule of the kings, emperors to colonial rulers and finally to gaining independence and becoming a country of the people, by the people and for the people.

Yet, despite attaining freedom, having a written constitution based on ideals of democracy and secularism and being led by visionary leaders like Mahatma Gandhi, Pt. Nehru, Lal Bahadur Shastri et al communal harmony in the country is on a decline. Issue- based politics has given way to vote – bank politics based on narrow interests and goals of political parties. In order to achieve these goals they’ve been resorting to picking up social causes on communal lines which divides rather than binds people. The situation is so bad today that even a small and often silly remark by an irresponsible member of one community about the other can take the form of a major riot – like situation leading to victimization of several hundred innocent people. Often these remarks are made deliberately and with ill – motives. The chasm between religious communities is so wide that people are fooled easily into believing even baseless rumours spread purposely to cause unrest among them.

We Proud Indians Respect All Religions and Countries.
In such a sad scenario it is our youths who can become agents of change and create harmony among different communities of the country, with their positive outlook and actions. Understand and Accept – As I mentioned earlier, India is a land where people of different faith have co -existed peacefully. However, it is politics, which proved to be divisive. It is not religious leaders by and large who divide but some politicians or political parties who seek to mobilise votes on grounds of religion, caste and ethnicity. The youth is educated and more aware but at the same time they must accept the true identity of India which is: multi – cultural and multi religious. It is important that they not only understand but also respect other communities and their belief system.

Celebrate occasions – Major religious festivals like Diwali, Christmas, Eid, Guru Nanak’s Birthday are officially declared as a holiday in the country. Our constitution says all are equal before the law. The Government encourages all its citizens to celebrate major religious festivals, irrespective of their religion, caste or creed. But how many of us make the effort of joyfully celebrating such festivals together with the members of other communities? Not many, I think. We are divided within on the basis of our religion. One of the best ways to achieve communal harmony is to jointly celebrate and participate in each other’s religious festivals. Young people can show their secular spirit through their attitudes and actions and set an example for others to follow.

Spread awareness – Most political parties have been playing the communal card to win elections. They have won elections by dividing people and by turning friends into enemies for their own gains. This must stop. Youth can be powerful agents of change. Once they know the right thing they cannot be suppressed into agreeing with the wrong. Youngsters must come together, express their opinion freely and spread awareness about important national issues and their take on it.

They must involve people in discussing and debating these matters of national importance and in arriving at a conclusion through consensus about what is best for the country. And they must make sure their collective opinions are conveyed to the leaders in clear terms. This will not only ensure that the government takes decisions based on the welfare of its people but also check the politicians from playing the communal card. Be a proud Indian – Most of all young people can set example for others by showing their pride in their country thorough positive and healthy dialogues, responsible behavior and caring attitude towards one and all. “Be the change you want to see” -Mahatma Gandh

?Role of Youth in promoting Communal harmony in India. (2016, Apr 18). Retrieved from http://studymoose.com/role-of-youth-in-promoting-communal-harmony-in-india-essay 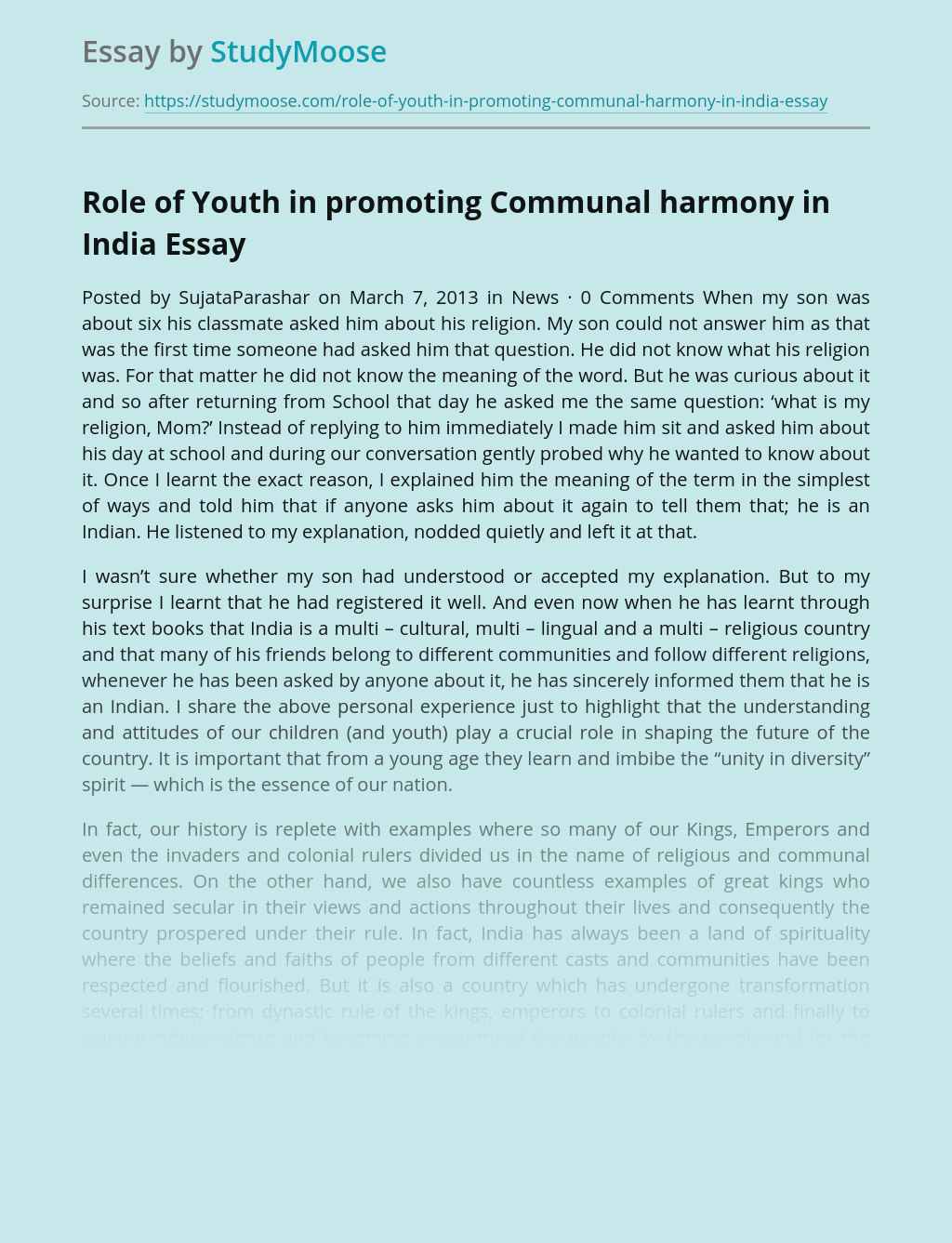 Don’t waste time
Get a verified expert to help you with ?Role of Youth in promoting Communal harmony in India
Hire verified expert
$35.80 for a 2-page paper
Stay Safe, Stay Original