Rhetorical analysis of "The Scarlet letter"

Pearls have always held a great price to mankind, but no pearl has ever been earned at as high a cost to a person as Nathaniel Hawthorne’s powerful heroine Hester Prynne. Her daughter Pearl, born into a Puritan prison in more ways than one, is an enigmatic character serving entirely as a vehicle for symbolism. From her introduction as an infant on her mother’s scaffold of shame, Pearl is an empathetic and intelligent child. Throughout the story she absorbs the hidden emotions of her mother and magnifies them for all to see, and asks questions nothing but a child’s innocence permit her to ask, allowing Hawthorne to weave rich detail into The Scarlet Letter without making the story overly narrative.

Don't use plagiarized sources. Get your custom essay on
“ Rhetorical analysis of “The Scarlet letter” ”
Get custom paper
NEW! smart matching with writer

Pearl, at times, is a vehicle for Hawthorne to express the irrational qualities of Hester and Dimmesdale’s illicit bond, and at others a forceful reminder of her mother’s sin. Pearl Prynne is Hester’s most precious possession and her only reason to live, but also a priceless treasure purchased with her life.

The product of Hester’s sin and agony, Pearl was a painfully constant reminder of her mother’s violation of the Seventh Commandment: ‘Thou shalt not commit adultery’. Hester herself felt that Pearl was given to her both as a blessing and also a punishment worse than death. She is tormented by her daughter’s childish teasing and endless questioning about the scarlet “A” and it’s relation to Minister Dimmesdale and his maladies.

After Pearl has created a letter “A” on her own breast out of seaweed, she asks her mother:

“But in good earnest, now, mother dear, what does this scarlet letter mean? — and why dost thou wear it on thy bosom? — and why does the minister keep his hand over his heart?”

Pearl implies that she knows much more about the scarlet letter than she lets on. Throughout the conversation Pearl is impish and teasing, saying one thing and contradicting it soon after. She refuses to say just what she means, which makes it hard for Hester to give a straight reply. Hester is shocked that her playful daughter has lead their conversation to the topic of the scarlet letter, and even more disturbed that she has assumed Hester’s letter and Dimmesdale’s habit of pressing his hand to his heart branch from the same issue. Pearl, in bringing this forbidden and painful subject about, unwittingly inflicts agony upon her mother. Hester cannot tell her daughter what has passed between the minister and herself and come clean. Pearl symbolizes a hidden part of her mother that has not, and will never be exposed and therefore washed free of sin.

Pearl was always drawn to the “A”, and seemed to twist the symbolic knife in Hester’s bosom every time she thought she was free of her weighty burden of sin. Pearl’s questioning wrenched Hester’s heart when the child seemed to somehow know about the relationship between Hester and Dimmesdale. Hester Prynne herself realized that Pearl was unlike other children, and prayed that she was not sin incarnate. When Hester finally frees herself of her sin and removes the scarlet letter after years of it’s leaden weight on her chest, it was little Pearl who brought the reality of her eternal condemnation back to Hester with a stinging blow. She was “the scarlet letter endowed with life”. Pearl represented the part of Hester to be always dulled by the searing judgment of others in that she was Hester’s ceaseless reminder of the sin she had committed, but also symbolized everything about Hester that was free and alive. She brings Hesters inner feelings to life, magnifying them for the world to see.

Pearl is the only happiness in Hester Prynne’s lonely life. Without a child to care for, teach, and love, Hester would have long ago given her soul and life over to evil. Yet she is also the contradictory pain that weighs down Hester’s shoulders. If Pearl had never have been born, she would not be condemed to her sinned concience. This wonderful child is symbolizing the strong connection bettween two rivaling forces; love and pain. Although Pearl is the product of an illicit bond bettween two people, she is also the only thing Hester has to live for.

When town authorities, shocked at Pearl’s apparent belief that she was plucked from a rose bush and not created by God, recommended she be taken from Hester and placed in a school, Hester responds with the following:

“God gave me this child!… She is my happiness, she is my torture none the less! Pearl keeps me here in life!…Ye shall not take her! I will die first!”

Pearl, though Hester understands that she was God-given as a constant reminder or her sin, is her only love and a friend that does not judge her by things past. Later, Hester comments that she would have “signed my name in the Black Man’s book too, and that with mine own blood!” if they had taken Pearl from her. Her daughter is her only earthly salvation, as well as her only friend. Pearl is a blessing upon Hester in that her light-heartedness and seeming innocence allow her mother to forget about her troubles. To see Pearl playing on the beach and creating a fascinating world of her own is to allow Hester to momentarily throw off the shackles imposed on her by Puritan society and be truly happy.

The Scarlet Letter is overflowing with masterfully crafted symbolism and representation, but Pearl Prynne is the purest and deepest symbol in the story. She was born not only out of utter sin, but out of the deepest and most absolute love imaginable. She serves as a messenger of God’s salvation through pain, and as a symbol of all that is blissful and content in Hester Prynne’s life. In the end, it is Pearl who kisses Arthur Dimmesdale as he lies dying on the scaffold, having admitted his sin. She breaks a spell that had lain over the dyad in adultery and herself – the product of their sin -, completing her service as a symbol of pain and hardship, but more importantly a symbol of love, salvation, and the deep bond between two lovers condemned by the strict decorum of the Puritan days.

Rhetorical analysis of "The Scarlet letter". (2016, Jun 17). Retrieved from https://studymoose.com/rhetorical-analysis-of-the-scarlet-letter-essay 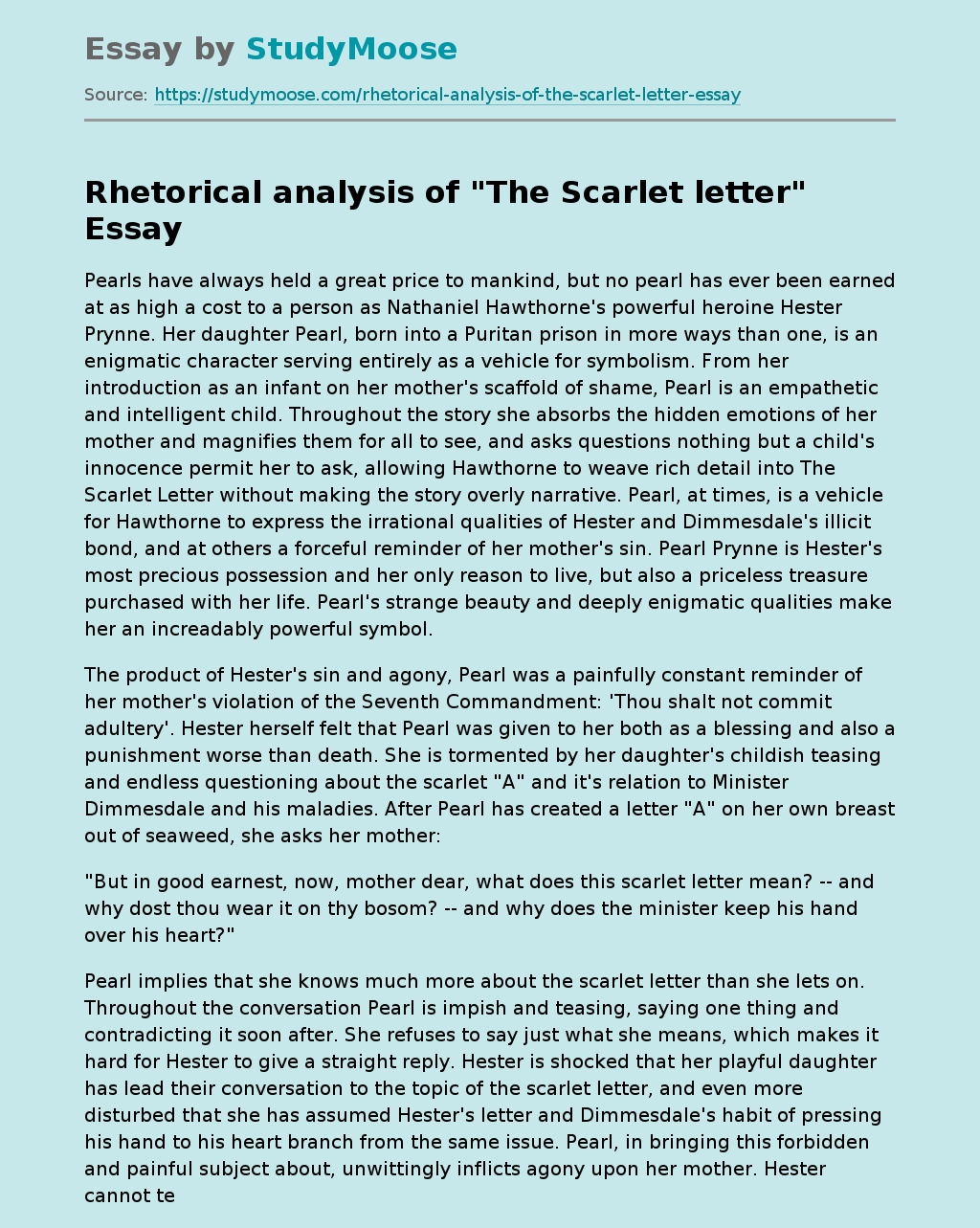