Who is most responsible for the death of Eva Smith?

Don't use plagiarized sources. Get your custom essay on
“ Who is most responsible for the death of Eva Smith? ”
Get custom paper
NEW! smart matching with writer

He probably had the least responsibility for the death of Eva Smith but still stuck with his wife on declining Eva Smith when she needed help and was pregnant and still stuck with Sheila when she made a complaint about Eva Smith for her supposedly laughing at her, which got her the sack, therefore she was unemployed, had no money and had nowhere to live. Sybil Birling When Eva Smith was unemployed, had no money and was homeless she appealed for the ‘Brumley Women’s Charity Organization’.

Sybil who was a prominent member shut her down one of the reasons being that she applied for help with the name ‘Mrs Birling’ which astonished Sybil Birling and the other reason being that she did not believe her stories about her husband deserting her… etc, and therefore though that it was all nonsense. Eva Smith had been shut down when appealing for help before and therefore this was more than she could take. Sheila Birling She made a complaint about Eva Smith at Birling’s factory for apparently laughing at her when she was trying on a dress.

This complaint got Eva Smith fired leaving her unemployed and therefore with no money and no friends of family that could support her financially and emotionally. Gerald Croft Gerald first met Daisy in a bar at the theatre. He saw Alderman Meggarty harassing her and went to her rescue. He took her for a drink and a meal because he pitied her and he learnt she was desperate and so let her use his friend’s rooms. She then became his mistress and they were together for the whole summer of 1911.

He finished with her and cast her aside because of his relationship with Sheila Birling. Although he was probably fond of Daisy, there was never going to be any future in the relationship because of the class differences. Gerald was the son of Lord and Lady Croft and would be expected to marry someone of similar social standing. This was more important in the early 1900’s. Even Arthur Birling feels socially inferior and boasts about a possible knighthood to increase his own importance.

Being rejected by Gerald was probably more hurtful to Daisy than the dismissals inflicted on her by Arthur and Sheila Birling because there were strong emotions involved. Daisy was in love with Gerald and being thrown out by him left her not only homeless but heartbroken. Also she had been cared for by Gerald and enjoyed quite a luxurious lifestyle. She therefore had more to lose than previously. The drain on her emotions would have left her with less fighting spirit so her future looked even bleaker. Eric Birling Daisy Renton (Eva Smith) does not look for a job again.

Within a few weeks she is back in the Palace Bar which is where she meets Eric. She is thinking again of becoming a prostitute to earn a living. He is drunk and insists on going home with her and threatens to make a row unless she lets him in. He sleeps with her on this occasion and another two or three times. She then discovers she’s pregnant but refuses to marry Eric because she knew he didn’t love her. Although it’s been a casual affair, Eric has become quite fond of Daisy and wants to take some responsibility.

Despite being from a wealthy family, he has very little money of his own and is forced to steal to provide for her. When Daisy finds out where the money has come from she refuses to accept any more and ends contact with him. Daisy Renton was now homeless, had no money and was pregnant with a bay to whom the father she did not love and could not go back to him. Conclusion I think the person with the main responsibility for the death of Eva Smith is Eric Birling. After she broke away from him she was left completely on the edge with nothing except the burden of an unborn baby.

If he had not stolen the money that he gave to her and got drunk and slept with her she would not have had to leave him and she would not have got pregnant with no money and nowhere to live. Since she had absolutely nothing after the relationship with Eric except and ‘unwanted’ unborn child, I think this was the situation that drove her to the edge to commit suicide-drink the bleach/disinfectant.

Who is most responsible for the death of Eva Smith?. (2020, Jun 02). Retrieved from https://studymoose.com/responsible-death-eva-smith-9039-new-essay 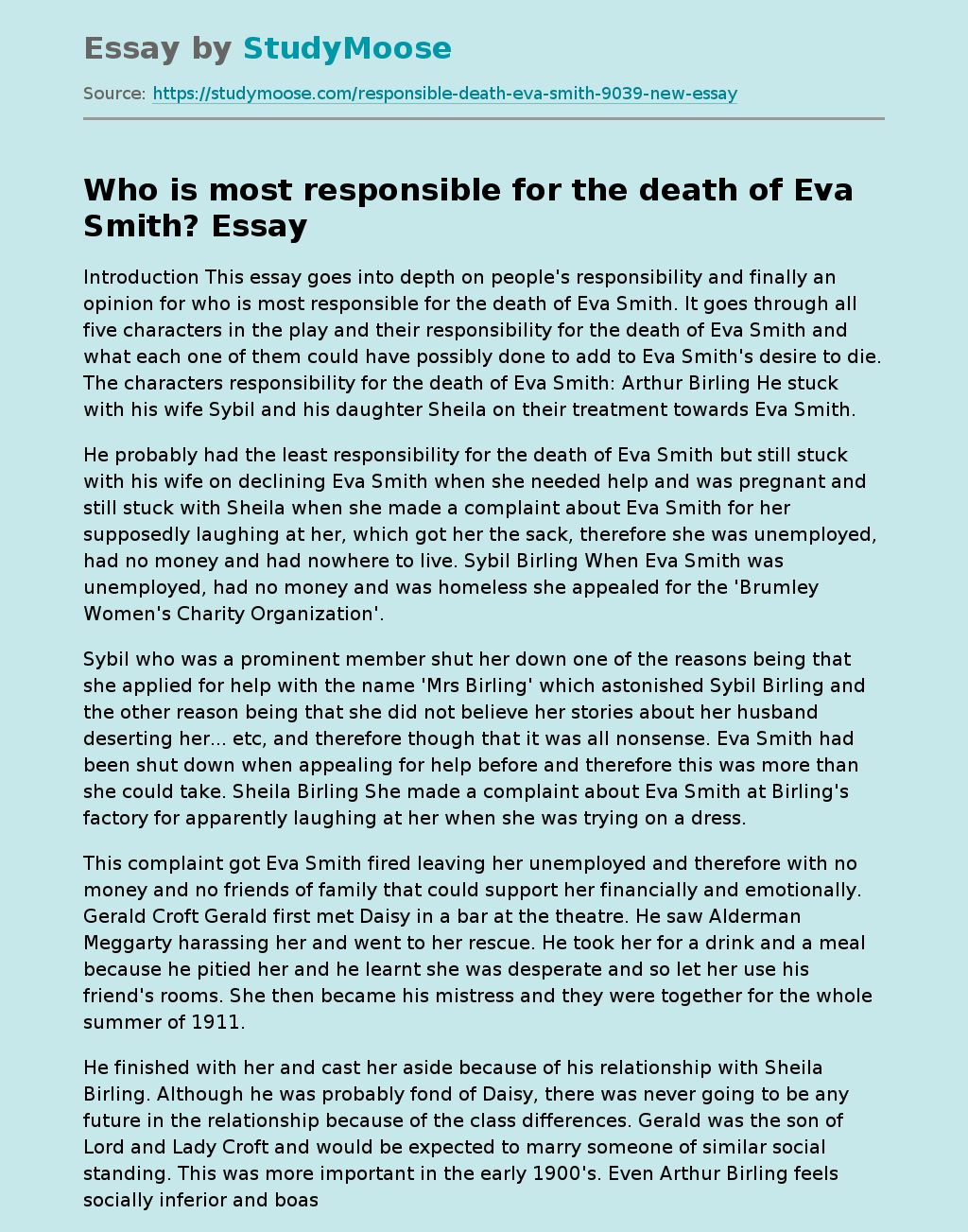