Relationship in London's Novel Call of the Wild

A review of the fictional novel “Call of the Wild” by Jack London, illustrating a man’s relationship with a dog

“Call of the Wild” by Jack London The Call of the Wild has a very interesting plot. It is centered around a St. Bernard and Scotch Shepherd mix, named Buck. At home, which was a large house in the sun, he ruled over all dogs. Buck was Judge Miller’s inseparable companion, until a man named Manuel, who was the one of the gardener’s helpers, committed a treacherous act.

Don't use plagiarized sources. Get your custom essay on
“ Relationship in London’s Novel Call of the Wild ”
Get custom paper
NEW! smart matching with writer

Manuel, to cover his Chinese lottery gambling debts, stole Buck from his sound sleep and brought him to a flag station called College Park.

There, the exchanging of money took place. It was simple. Manuel needed money to pay off his gambling debts, and Buck was a prime candidate. Buck was loaded onto an express car to Seattle. When he got there, he was bought by two men named Perrault and Francois.

He was loaded onto a ship called the Narwhal and taken to the Yukon, where he was to be trained as a sled dog. There were other sled dogs that Buck came to know well, each with their own unique personality. After only a short time of training, Buck was a sled dog, traveling with the team of huskies and mix breeds from Dyea Beach, to the town of Dawson.

After several trips with Perrault and Francois, Buck was traded to a gold seeking family. They knew nothing, or hardly nothing, about managing a sled team.

There trip began with a very bad start. The family had loaded up their wagon with too much unneeded baggage, and it was top heavy. As the dogs began to pull away and pull around a curve, the baggage tipped over along with the sled and thus the unnecessary baggage was discarded, and the trip was barely completed because of harsh weather, wrong supplies, and poor management skills of the dog handlers. All except a man that went by the name of John Thornton, perhaps the only sane one in the group.

After one of the men repeatedly beat on a dog, Thornton became enraged. He threatened to kill the man. A few minutes later, the rest of the family that left Thornton behind fell through some cracked ice and drowned. That left Buck and Thornton to fend for themselves. The time of this book is in the great gold rush era in the Yukon and Alaska. The rest of the book concludes what happens to Buck and John Thornton and some of the great and strange times they have together. I enjoyed this book because it tells about the goods and bads of wilderness life. It doesn’t just lean to one side.

Relationship in London's Novel Call of the Wild. (2020, Jun 01). Retrieved from https://studymoose.com/relationship-in-londons-novel-call-of-the-wild-essay 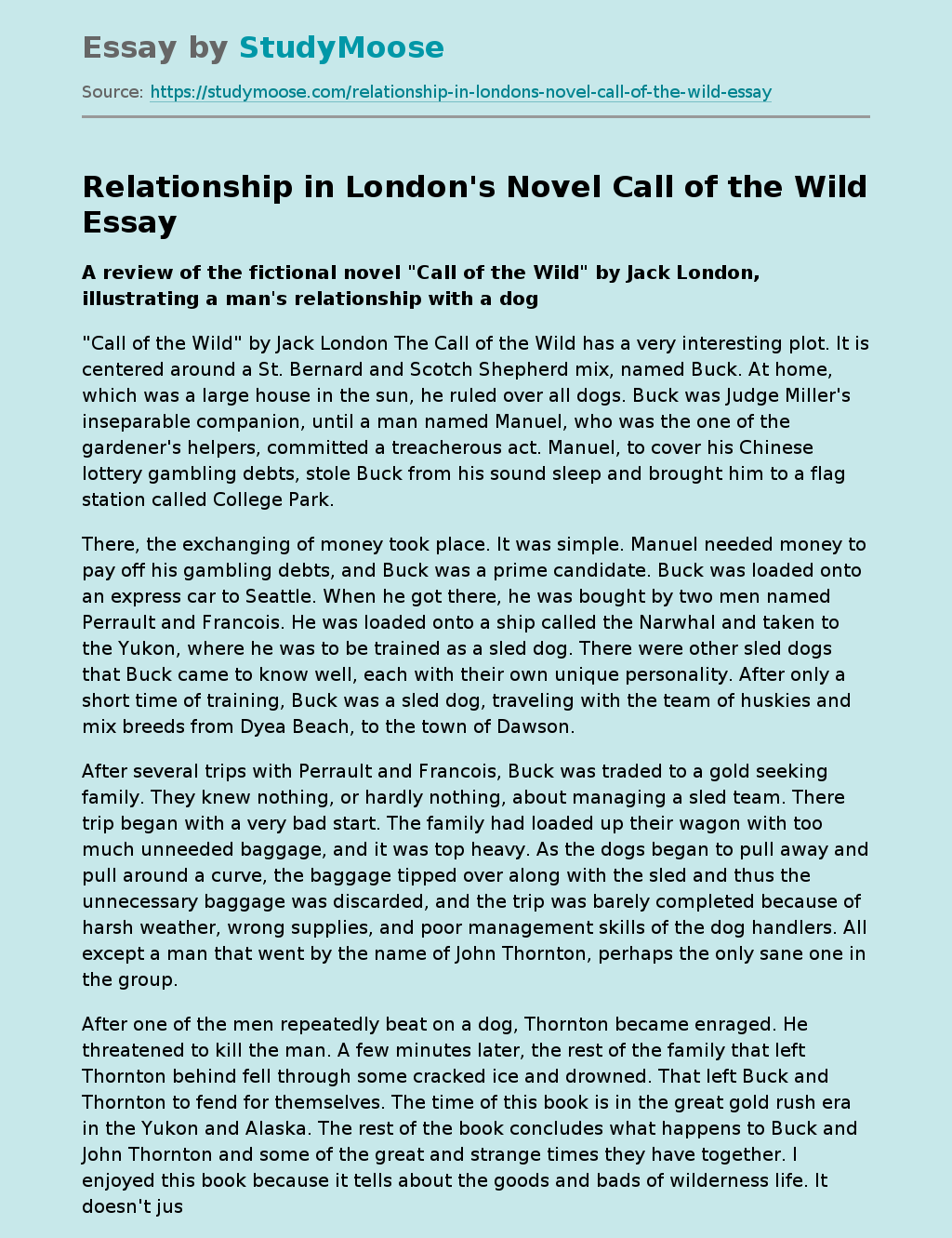