Refugee Boy is a story about a 14-year-old boy named Alem Kelo born in Africa. Benjamin Zephaniah uses Alem as an example of how badly treated refugees are and how it is possible for us to treat them better if we treat them like normal people. In the beginning of the novel Alem’s father took him to London for what Alem thought would be a holiday. Leaving his mother at home, his father actually planned to leave Alem in London believing it to be safer.

In the beginning of the novel Zephaniah uses two passages, one named Ethiopia and the other named Eritrea. These passages are almost exactly the same and this shows use that, because Alem’s family are a mix of both Ethiopian and Eritrean, they would be hunted wherever they go or move to. This also tells us that most refugees emigrate because of very good reasons; in this case, war. Refugees are constantly viewed and treated as outsiders instead of normal people, which they are.

Zephaniah shows this very well when he describes how Alem had to go through the screening process. Alem is thoroughly humiliated throughout the screening knowing that both Pamela and Sheila were watching. Another example of how Zephaniah shows use really how bad our discrimination of refugees is and how the stereotypical views we have obtained due propaganda such as news television programmes, is when Alem’s father goes to the Home Office to make his asylum application but is arrested and taken to Campsfield detention centre.

Just because he is a ‘foreigner’ police automatically thought to arrest him. The children’s’ home that Alem stays in, is portrayed as a sort of dumping ground for mis-fit refugees. It is basically a place where isolated lonely boys go to when they have nowhere else to go. The whole place is filled with young boys and teenagers with cluttered up emotions. Sweeny is a good example of a young man in the home who has a lot of excess emotion and obviously feels abandoned because he feels the need to take it out on the other people there.

People like Sweeny make the boys at the home want to loose they’re cultural identity in order to fit in and not be a victim Zephaniah portrays Alem as an innocent, stoical character so that we understand that our stereotypical image on refugees is wrong and not all refugees are bad people or terrorists. Zephaniah uses Alem’s background to show that refugees often don’t have a choice in emigrating and that refugees don’t always immigrate to other countries steal their Jobs and take benefits.

They go to escape war or political injustice and for many other reasons. Ruth is an important character in the story because she seems like a typical teenage girl with an attitude, but when Alem finds out his mother had me brutally murdered in Africa, Ruth shows incredible solace and our views on her suddenly change, as for the first we see a gentle compassionate Ruth who has an emotional background and problems of her own. She reminds us that everyone deserves compassion and consideration not just refugees this is why she is originally distant to Alem.

After her and Alem have an emotional talk we discover that she reaches out for Alem and gives him the love and compassion that her parents should have shown her when fostering children in the past. Alem feels isolated throughout the novel and whenever he gains hope he is often brought back down with bad news making him feel isolated. Like when he was just fitting in well in England and having a great time, his father wrote to him informing Alem on what had happened to his mother bringing Alem and his happiness down into a pool of isolation again.

Or like when he manages to get himself back on top again when his father comes to stay in England then they’re asylum application gets turned down. One of the most isolated times for Alem, is when he is in the children’s home. He doesn’t know anyone. And he is constantly taunted and made to feel small and intimidated by Sweeny and his gang pretty much as soon as he arrives, ‘”Get the biscuits, it’s the easy way out,” on of them said as he looked Alem up and down. You’ll get me some biscuits or I’ll bust you up,” said the first kid loudly’. He’d not been in the ‘home’ very long and already he’s been threatened. It shows how bad the environment he’s got no choice to live in is and how alone he must feel during these times. ‘Mariam took Alem to the local social services where he asked the big question… “What choice do I have? ”’ Alem feels that he has to accept the Fitzgeralds as his foster family if he is to get out of the home.

He askes asks himself and other many questions about himself showing that he isn’t very confident or aware of what his future holds and therefore relies on other to make decisions for him, like when he says, ‘’How long will I be staying here? ”’ Alem realises that he can’t even decide to stay with the Fitzgeralds or the home. Without his parents there to decide for him Alem feels lost. ‘”Will I still be here when I’m sixteen? ” “That is a good question. ”’ Alem feels like he has no control or influence on his life, so he constantly asks questions about his future.

Chapters 24-27 are in a different style to the rest of the novel. This different style is very powerful in getting it’s message across because it makes you feel like you’re reading a real report in a real newspaper which makes you feel even more for Alem because the strong effect Zephaniah uses, makes you really believe in what he’s saying and makes you believe that the novel has really happened. It is very clever how he managed to create realism and in your mind you feel throughout the novel that you’ve been with him all the way and now you have seen him to the end.

Zephaniah makes us feel that all refugees have a story and he’s made you want to find out about them and their story and want to know what they’ve been through. Reading the book he’s defiantly given me a more positive attitude and view on refugees. Zephaniah structures the story so it feels like you are right by Alem on the whole of his journey so you feel like what’s happening to him is affecting you as the reader. Zephaniah is very successful in getting his message across and now I think people who read this book will have a wider opinion on refugees and the will feel much more strongly on bad they get treated. 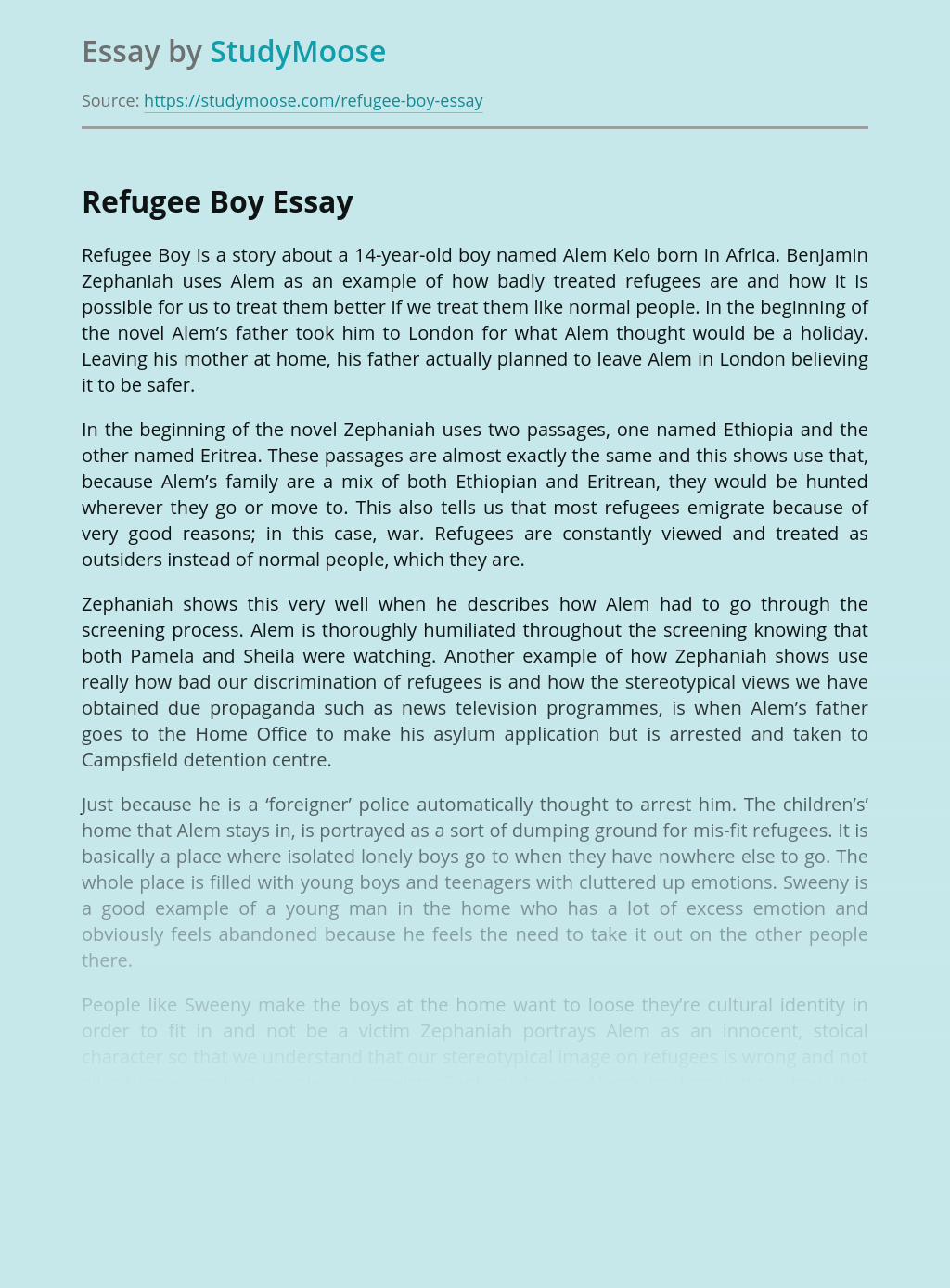 Critical Review - "The Fault in our Stars" by John Green

The Fault in our Stars is a young adult novel written by John Green. It is based on the remission of a 16-year-old Thyroid cancer patient, Hazel Grace who relentlessly struggles to breathe. She attends a Cancer Kid Support Group where she meets Augustus Waters, a 17-year-old guy diagnosed with osteosarcoma. They form a close...

In the novel Bridget Jones Diary, author Helen Fielding portrays men and women as superficial observers who act on their superficial judgment and are mentally affected by this. There are many different social messages being conveyed but they all seem to be of some superficial nature. They mostly express a man or a woman’s sexual...

‘With it’s sight restored at last, the bird jerked it’s head sideways to look at Carl and then Joy, as though it was asking, is it true? Am I free?’ James Moloney uses the image of the osprey in several ways throughout the novel. The main technique in which it is represented, is the emotion...

The Remains of the Day

Kazuo Ishiguro’s The Remains of the Day is an intimate portrayal of an utterly English butler through his methodical ruminations on the subjects of greatness and dignity. Stevens, the aging butler of Darlington Hall, performs his job with selflessness and a ruthless suppression of emotion. He is unsentimental, stiffly walking through job and life like...

Tess of the D'Urbervilles: nature and setting

In the novel Tess of the D’Urbervilles, Thomas Hardy makes extensive use of nature and setting to portray personal relationships and emotions, in particular that of Tess and Angel Clare. Using features from Pathetic Fallacy to extended metaphors, Hardy presents the two characters as being at one with nature and directly linked to the seasons....

Jasper jones is intriguing novel by Craig Silvey it revolves around the mysterious death the mayors daughter Laura Whishhart (jaspers girlfriend). Whose brutally abused body is found hanging from a tree in a clearing that has been adopted by jasper jones? And who has bad reputation due to his race and the fact that he...

The short story “Tent Worms” by Tennessee Williams is a portrayal of a depressed wife who is battling her emotional instincts. The story reflects her decaying marriage and the decaying life of her dying husband. There are three characters in the story, the husband Billy Foxworthy, the wife Clara Foxworthy, and the doctor who is...