Reaction to Dances with Wolves

Manifest Destiny was an idea that America should take all the land and spread its blessings of Democracy. In this film “Dances with Wolves” you see how this idea affected the Native Americans. A stereotype was put on all Indians. They were thought of as violent and beggars and thieves. One tribe the Pawnee did fit this description and attacked white settlers. John Dunbar, an American soldier, was sent by the government to communicate with the Indians. While communicating with the Lakota tribe he discovers the true man he is.

A language barrier between two people can be quite a challenge. It can be very frustrating to understand the other person. Misunderstandings are always a possibility. Things could be interpreted as a threat or an insult.

For example, when John Dunbar brings Stands with a Fist home all bloody, could be misunderstood. The tribe could have thought that he hurt her. Communicating is not impossible though. In the movie Dunbar acted with hospitality and invited Kicking Bird and Wind in his Hair to sit. The first word that was understood was buffalo. Dunbar acted like a buffalo and they understood. “Tatonka”, buffalo was the start of communication and a relationship. With more and more visits they would trade for example Dunbar would expose them to coffee and sugar.

Later in the film, Stands with a Fist became a translator.

Cultural differences were apparent in the film. even though he was smart he did not like the indians. He refused to speak to them and wanted them dead. hahahahaDunbar lived alone and the Indians live communally. A big difference was how one another accepted each other. Both were scared, tested boundaries and how close they could get. The chief, Ten Bears, thought that the tribe should not attack because Dunbar could possibly tell them about other white men. As for the american soldiers, they just attacked and after asked questions. Treatment of the land and living things were different as well. The Lakota lived off the land without wasting it. If they killed a buffalo, all of it would be used. The american hunters just stripped the buffalo of their skin and left them to die. In tribe meeting everyone’s opinion was voiced and considered. Even women had a chance to take part. American had little to no voice and not everyones ideas were heard. Dunbar looked past these differences and became part of the tribe.

Assimilation was a big part of the movie. The Sioux Indians did not assimilate to white culture as much as Dunbar did to their culture. He gets his name changed after the Indians observed him playing with two soc to Dances with Wolves. The only real big thing the Indians did to become more american was learn english. Dunbar learns the language, even marries Stands with a Fist and wears the clothes of a Lakota man. They want to be like each other. This is displayed when Wind in his hair trades his necklace for Dunbar’s jacket.

The difference between the Lakota tribe and Lt. John Dunbar did not stop them from communicating, expressing the differences and assimilating to each other. By the end of the movie the Lakota was his family and being and indian was his way of life. Manifest destiny was thought to be justified to Americans but destroyed the Native American way of life.

Reaction to Dances with Wolves. (2016, Dec 19). Retrieved from http://studymoose.com/reaction-to-dances-with-wolves-essay 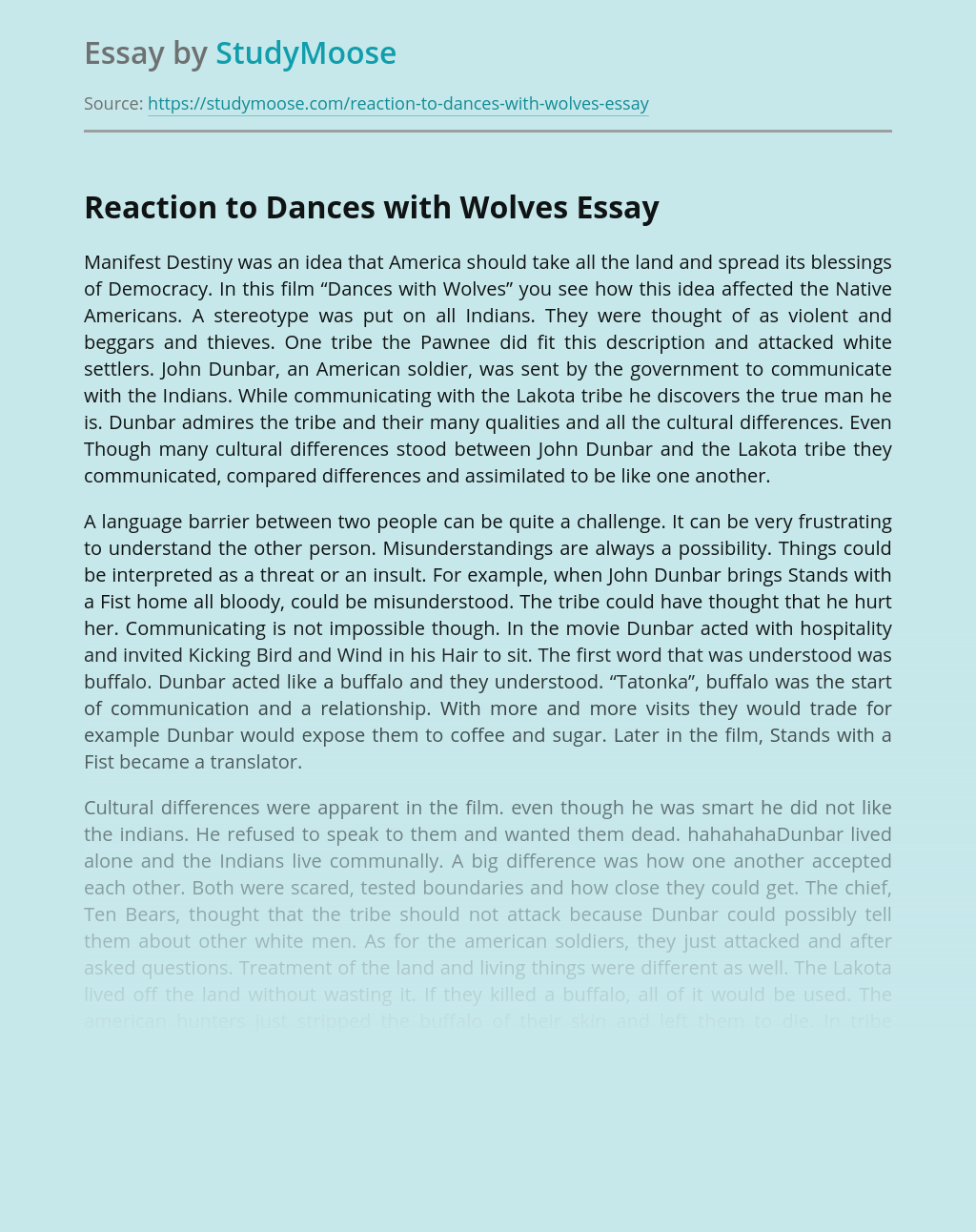 Don’t waste time
Get a verified expert to help you with Reaction to Dances with Wolves
Hire verified expert
$35.80 for a 2-page paper
Stay Safe, Stay Original