Stories of princess were part of our childhood memories. We dream of becoming one during those times. But in Tumandok tribe in Tapaz, Capiz, Philippines, there were women, who were treated like a princess. They are known to be the binukot. Before seeing the documentary of Huling Prinsesa (Last Princess), I was really excited because who knew that a 3rd world country like the Philippines would afford to have a princess. Then I realized, Philippines was not a 3rd world country then.

And I remember that during the pre-Hispanic period we used to have datus, babaylans, pandays so having a princess would not be far from reality. Philippines though colonized by foreigners, retained its rich culture and I think this is one of the proofs.

The binukot was usually the prettiest daughter of the chief tribe. The term was derived from bukot which means “to keep”. Binukot was not allowed to go outside the house. That’s why her food was usually delivered in her room.

She will be taught to memories and sing different epics. Going outside the house is not a simple task. The binukot needs to be carried on a cradle so that her feet will be kept clean.

The tribe believed that the binukot has a supernatural power. During planting and harvesting time, she will be brought to the farm to perform, for them to have a bountiful harvest.

At present there are still few binukot on some part of Panay Island. But the danger of losing this tradition is very high, for most women of Panay preferred to be an ordinary citizen instead of becoming a princess.

Stories of princess were part of our childhood memories. We dream of becoming one during those times. But in Tumandok tribe in Tapaz, Capiz, Philippines, there were women, who were treated like a princess. They are known to be the binukot.

The trip to the remote mountains of Capiz is tough — an hours-long motorcycle ride and several hours more of trekking across rivers and up and down rocky, slippery slopes. It is a challenging feat for anyone who wants to see and explore a mysterious tradition preserved for decades among some of the mountains isolated communities.The trip took some time and I thought it’s worth the wait just to see the ‘Last Princess’, from the trip alone, it made me really curious of what will princess look like. I-Witness travels to the Tapaz Mountain, considered the farthest in Capiz, located in the central Philippines island of Panay. The mountain people called the tumandoks live in Tapaz, and I-Witness searched for the tribe’s last remaining princesses called the binukots.

Reporter Kara David reaches the community of Rizal Sur, a village that looks just like any other isolated community, where the tumandoks living in traditional huts and survive on whatever nature provides them. In the midst of this community, she meets one of the last remaining binukots, 73-year-old Lola (grandmother) Isiang.

Lola Isiang lives in an old hut, just like everybody else in the community. However, she has stayed inside a room in the house ever since she was five years old, living in isolation as the family’s chosen binukot. 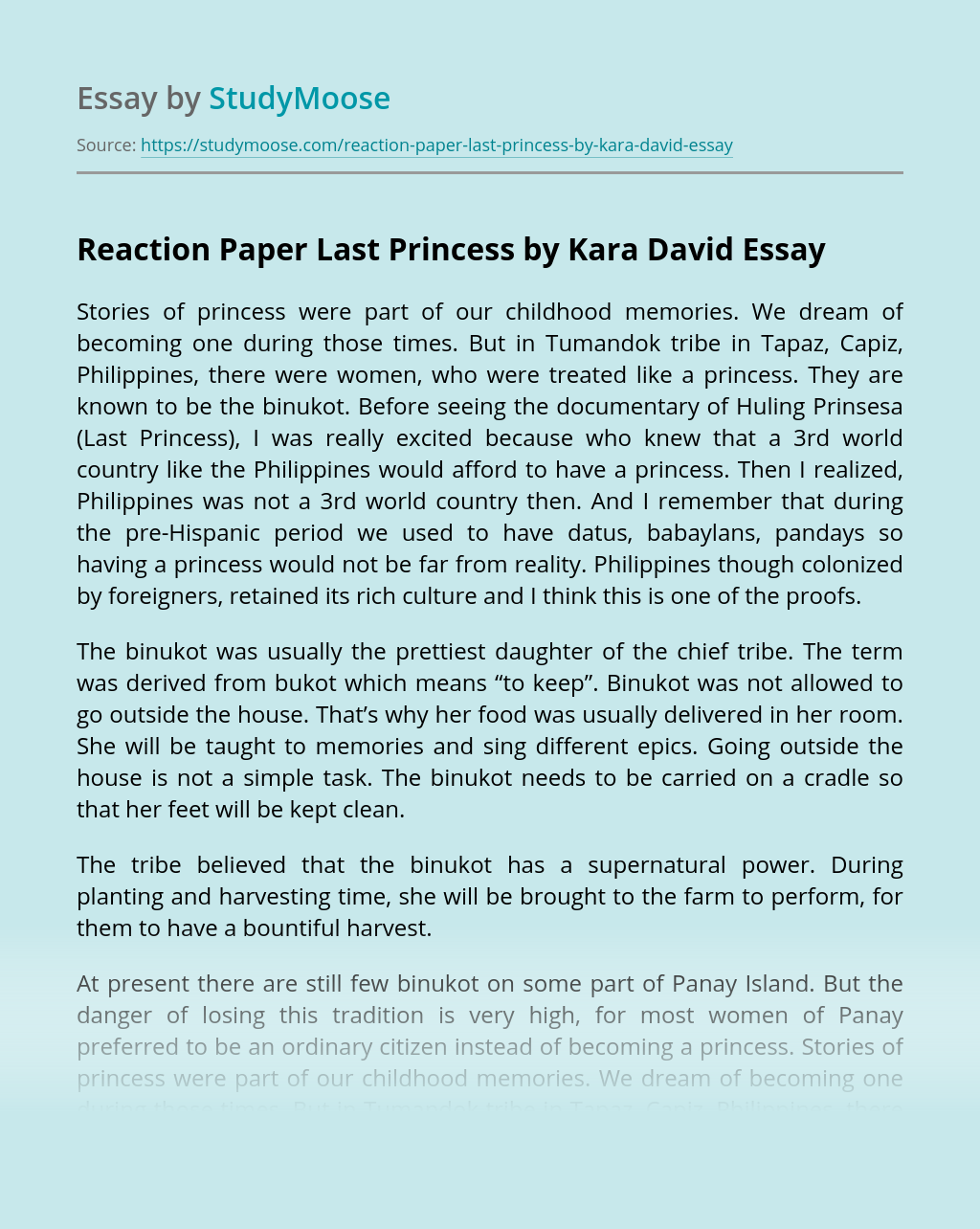