Adolf Hitler used the Jews as a scapegoat, blaming them for Germany’s economic and social problems. His Nazi party promised to resolve these issues, and in 1932 won most of the vote. Many members of the German public were bystanders and did nothing to condemn the Nazi Anti-Semitic policies. This may have been due to the fact that they were content with other Nazi policies, which appeared to improve the disastrous financial and economic conditions in Germany. People were also afraid to speak out, as they were terrified of the brutality of the Nazis.

Don't use plagiarized sources. Get your custom essay on
“ Pyramid of Hate – Holocaust ”
Get custom paper
NEW! smart matching with writer

This demonstrates the prejudiced attitudes towards the Jews. The Nazis used propaganda campaigns to promote the Nazi party’s hatred of Jews. This attitude towards Jews is known as anti-Semitism. The Nazis wanted to portray the Jews as inhuman, inferior beings who were interested primarily in their own economic gain or in communism. All Jews and non-Aryans were excluded from Germany society. These are some examples of the acts of prejudice before the holocaust began.

The Nazis introduced anti-Jewish laws, which gradually eliminated the rights of Jewish citizens.

Jews were regularly persecuted and humiliated. All Jews had to wear a Yellow Star on their clothing. They could no longer hold government jobs, own property or run their own businesses. This was part of the Nazi discrimination against the Jews. The Nazis set up Jewish ghettos all across the occupied countries. This allowed them to isolate the Jews from the general population, thereby restricting the rights of the Jews while giving themselves greater control.

Anything against the will of the Nazis was punishable by death.

The ghettos were overcrowded and unhygienic. There were severe food shortages, which in many cases led to mass starvation. Jews were forced to wear Yellow Stars or badges so that they could be easily identified. Germans deliberately abused and killed Jews when they did something wrong. This was part of the physical attack that led up to genocide. The Nazis planned to dehumanize their victims. On arrival at the camps, officers would shout orders, and vicious dogs were used to keep control over the victims. Jews were treated like animals.

German industrial companies supplied the sophisticated technological equipment to build the gas chambers and the crematoria ovens. These ovens were used to burn vast numbers of bodies. Food was scarce and prisoners suffered death from many causes including starvation, disease, shooting, lethal injection and torture. Others died as a result of medical experiments conducted in the name of ‘science’ by SS doctors. These experiments violated all moral, medical and scientific codes of practice. Nazi Germans deliberately and systematically exterminated the Jews. 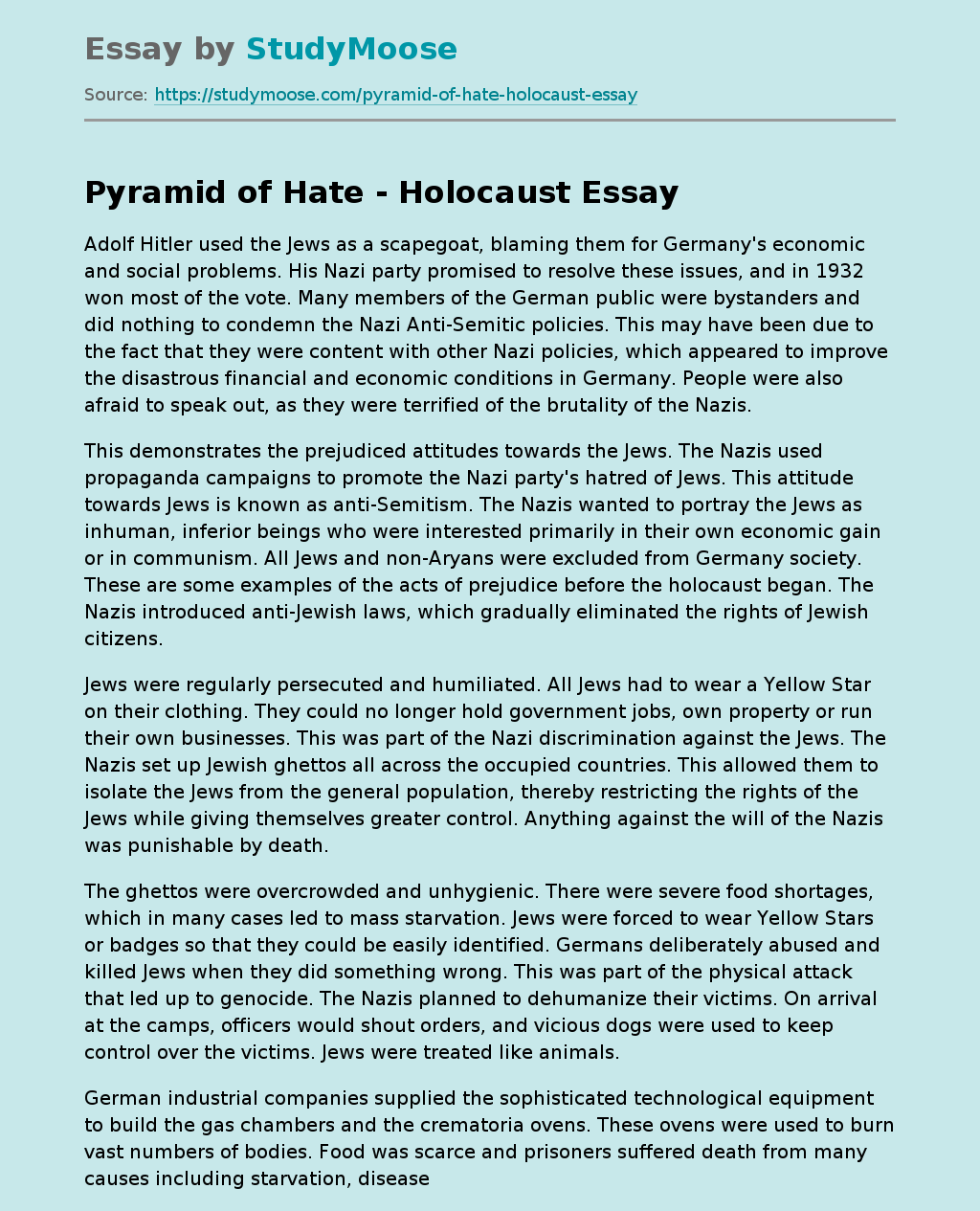