Ask any teenager today and they will tell you that they are nothing like their parents, that their parents just don’t understand them. This may be true and this may be false, it just depends on how you look at it. Teenagers of the Rebel Without a Cause, meaning the parents of today’s teens, did face a lot of the same problems and issues that we now face. Yet I am left thinking did the past teens face all the same problems at the same time as we do and were some of their “problems” not as much of a problem as it is to us.

Don't use plagiarized sources. Get your custom essay on
“ Problems of High School ”
Get custom paper
NEW! smart matching with writer

Teens from the past and present are faced with problems such as school, relationships, and friends. There were many teenage problems back then in “Rebel Without a Cause” and today’s teenagers. Most of these problems that Jim Stark and the other teens faced were similar, but my own belief is that these same problems were not as big of problem back when they were growing up.

Let’s take school and homework for example, oh sure your parents had it too but I just don’t believe that there was as much pressure upon them to get good grades. Also, get into a good college as there is for us.

And of course with the knowledge that college is right around the corner most teens also need to work. They need to save money for college, or a car, or to make the girl/boy of their dreams happy by taking them out on dates once in a while.

Plus, all this pressure and work can build up for a teen and to most of us it seems like we never have a chance to just relax and hang out with friends anymore. It relates to the movie because some of the teens do not care about homework or going to school. The reason is that was back then it was easy to get a job by only having a high school diploma with no college education.

But, now in our teen lives it is hard to get a job with a high school diploma. Another thing that is different from the past from the present is the fashion that students wear. In the past, boys wear plain regular clothes and the cool guys always wear black jackets or blazers. It is similar like what a gang member usually wears right now. Except the gangs have their baggy pants or shorts and show their boxers in black or white. It is weird how those kind of guys like to show-off their boxers or underwear. For the girls in the past, they all mostly put on dresses. Now girls mostly wear skirts or short shorts.

Plus, girls always try to put on the sexiest clothes to wear because to get all the attention and be popular. Like in the movie, Jim Stark wears different clothes from his classmates. The reason is that he moved to a lot of different high schools because he never made any friends and doesn’t fit in with the other teens. Also, in every high school he went to the teens called Jim, “Chicken”. Why he is called that because the teenagers see him acting like a chicken, when Jim does not want to get into trouble. I think back then music for teens like, “Rebel Without a Cause”, probably listened to rock and roll.

But now teens prefer rapping and hip hop music. It’s interesting how music has changed so much in the past because teens loved to get crazy on rock and roll. I wonder how teens will react if music never came to rock and roll. Probably teens will make their own music or have to try out their parent’s music, which were more hip hop and dance music. Now teens today have a mix of genres they like to listen. Most teens in the present relate their music to their emotions. The reason is because they must have some problems in their lives and music helps teens release stress.

Plus, I am sure that it happens to the teens in the past except not big problems compare to our teen years. I bet Jim Stark and his classmates love to listen to rock and roll. Even though it does not show in the movie that they played rock and roll, but back then there was a lot of rock and roll. The teens in the early years prefer rock and roll because it was something they can be themselves with their friends. Sometimes parents cannot stand their teen’s music and tells them to turn it off or take it away from them. It is weird how in the movie, it shows parents like Jim’s parents how they do not care about his school issues.

For instance, when Jim’s classmates call him chicken, he tells them to stop and be angry to his parents. Then Jim’s parents decide to move somewhere else again, which happen several times. Jim does not want that because he thinks it is going to happen all over again. So, basically Jim’s parents do not really help him and his life that much. But comparing to today’s teens, Jim’s parents and other parents show more concern for each of their son/daughter’s education to make them successful in life. I can see that every year new parents learn from their past seeing their mom and dad on how they take care of their son or daughter.

Then later on the new parents learn from their parent’s mistakes and become a better parent. There are things that are similar between our time and the movie, “Rebel Without a Cause”. One is that teens hate doing homework and waking up early for school. Teens in the past and present struggle with their emotions like in relationships or family issues. Jim shows his emotions to his parents in the movie. He tells them how he feels every time when he transfers to a new school and he is not good at making any relationships or friends.

The main reason is everyone calls him chicken because he is different from his classmates and they think he is afraid of them. I just want to say that I am not saying that teenagers of the past did not have their own problems, but of course they did, every single teen alive faces problems that they think is hard and that their whole world is crumbling down around them well at least once in a while. But now that they have grown up and turned into the parents of today’s teenagers I feel that they put more pressure upon their own teenage child in order for them to achieve more than they were able to.

A common expression is, “My parents are so strict, overprotective, or too involved in my life, because they don’t want me making the same mistakes they did when they were my age but they need to trust me and just leave me alone. ” And that expression can sometimes is kind of true. But all in all I feel that our parents do understand what we, as teenagers, are going through because they did face the same problems that we face today, but maybe with just a little less pressure. 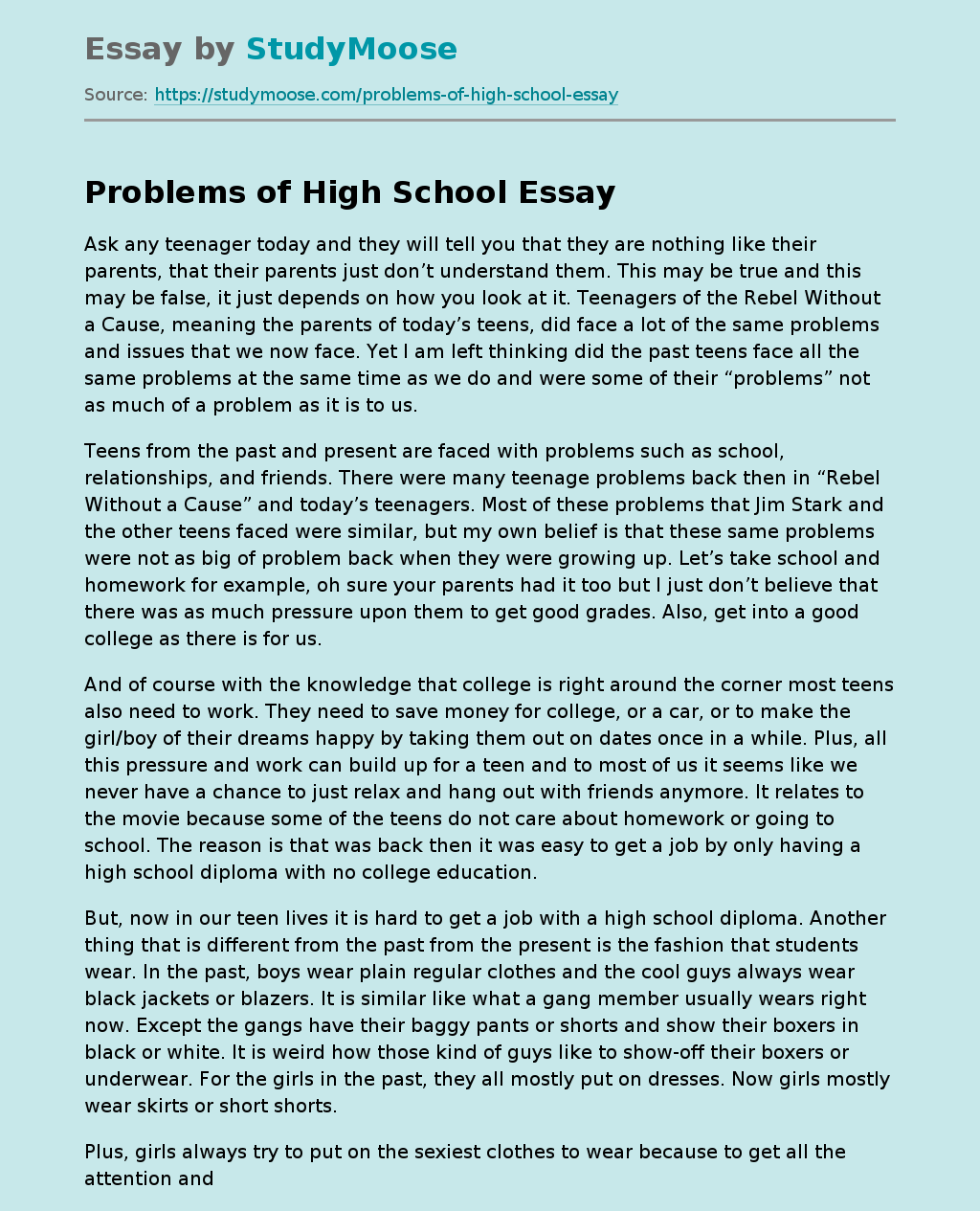