Static equilibrium of forces was investigated through the use of different weights attached to cords which were connected to a central ring, while pulleys supported them. This assembly facilitated the force band system to demonstrate that equilibrium will be attaining regardless of disturbances. However, due to errors in the experiment, the sum of the x and y component did equate to zero as predicted. The graphical solution of the experiment yield a polygon that is completed indicating that all the forces are in equilibrium while the analytical solution indicates a resultant force of 0.

Get a verified writer to help you with Polygon of Forces

Table 1: Showing symbols and meanings used in the experiment.

• To analyse static equilibrium while numerous concurrent forces is acting.

• To confirm whether the resultant of the force system of forces acting on a body at rest equates to zero or not.

A particle is said to be in equilibrium when the vector sum of the external forces acting on a point is zero. The analysis of particles in equilibrium is based on Newton’s 1st law of motion.

Which states that every object in a state of uniform motion tends to remain in that state unless acted upon by an external unbalance force. When a body remain in a uniform state of motion the sum of all the forces acting on it is zero and it is in equilibrium.

Coplanar force systems have all the forces acting in one plane. They may be concurrent, parallel, non-concurrent or non-parallel. Almost any system of known forces can be resolved into a single force called a resultant force.

The resultant is a representative force which has the same effect on the body as the group of forces it replaces. It can be determined both graphically and algebraically. The graphical methods are parallelogram and triangular while algebraically the resultant is the root of the summation square of the various forces along their individual axis. It is important to note that for any given system of forces, there is only one resultant.

Forces can act upon a rigid body and also a particle in the same way. A particle has negligible dimensions and undergoes only translational motion while a rigid body is one of definite shape and size. A rigid body will undergo negligible change when a force is applied and it undergoes both translational and rotational motion. However, both will be in equilibrium if the summation of the forces acting on them is equal to zero.

For this vector equation to be satisfied, the force’s in x and y respectively must be equal to zero. Hence;

When conducting an analysis on a rigid body the first step is to do a free body diagram on the system. The steps in doing this are as follows:

1.Select the appropriate body with the desired unknown in mind and draw an outlined shape (sketch).

2.Indicating on this sketch all the forces that act on the body including the reactions if any.

a. Sensing element- adjusting the scale marking on the instruments to line up with the horizontal

b. Signal modification-the identification of the marking that the drawing force lines up with

c. Indicator or recorder- numeric value above the marking that it is being lined up with

1) The apparatus was assembled as illustrated in figure 2 above and the weights of the hangars recorded.

2) Drawing paper was then placed on the board behind the system and a level was used to ensure that the entire apparatus is aligned.

3) The centre of the system was noted and it was disturbed to verify equilibrium.

4) Various weights were then added to the hangars on the system and it was
disturbed once more.

5) After the system came to rest, the points of intersection of all the cords were marked. Two points were also marked behind each cord to describe the line of action of the hanger.

6) Disturbance was then applied to the system in order to check equilibrium as the line of action of the hangars should cover the original points marked.

7) The values of the weight on each hangar were recorded.

8) After which, the drawn paper was removed and the points obtain were connected.

9) The protractor was used to measure the angles between the forces and the horizontal (i.e. α, γ, θ, and φ) and this was recorded in table 2.

X-component =Force*cosine of the angle

Y-component= Force* sine of the angle

The results obtained in this experiment showed that errors were associated with the values. The system was in equilibrium as when it disturbed it returned to its original position. Therefore the errors may have been caused by experimenter, the apparatus and external environmental conditions which gave the resultant 0.0880N instead of zero (0).

Friction in the pulley could have hindered the smooth motion of the cords while the attached masses tried to maintain equilibrium, thus resulting in the inaccuracy in the angles. Parallax error is a major cause factor for the inaccuracy of the results obtained. The points that were placed on the drawing paper behind each cord may not have been exactly behind the individual cord as there was a significant gap between the paper and the cord. A third form of error that could have caused inaccuracy is environmental conditions. During the experiment the force board was subjected to interference, as the experimenter caused some amount of vibration which shifts the board.

Regardless of the many precautionary measures made, the errors were unavoidable; however, the experiment was conducted in accepted manor as the resultant was close with a small degree of uncertainty.

Concurrent forces intersect at one common point, the resultant of these forces in the system acting on a body at rest equates to zero. However, the experimental values obtain for the resultant force is (FR = 0.0880 ± 0.181 N), which was calculated form sum of Forces in X direction and Y direction respectively.

It is recommended for this experiment to be more effective in future investigation and for confirmation of theories, that pulleys be situated so that the distance between the cords and the board are closer. This will reduce the errors that will be likely caused by parallax and vibration. A smoother force board can be used to reduce any negative impact that it can have on the experiment. I would also recommend repeating the experiment several times each time disturbing the system and ensuring that the cords line up exactly with the lines of action before removing the paper from the force board.

Get a verified writer to help you with Polygon of Forces 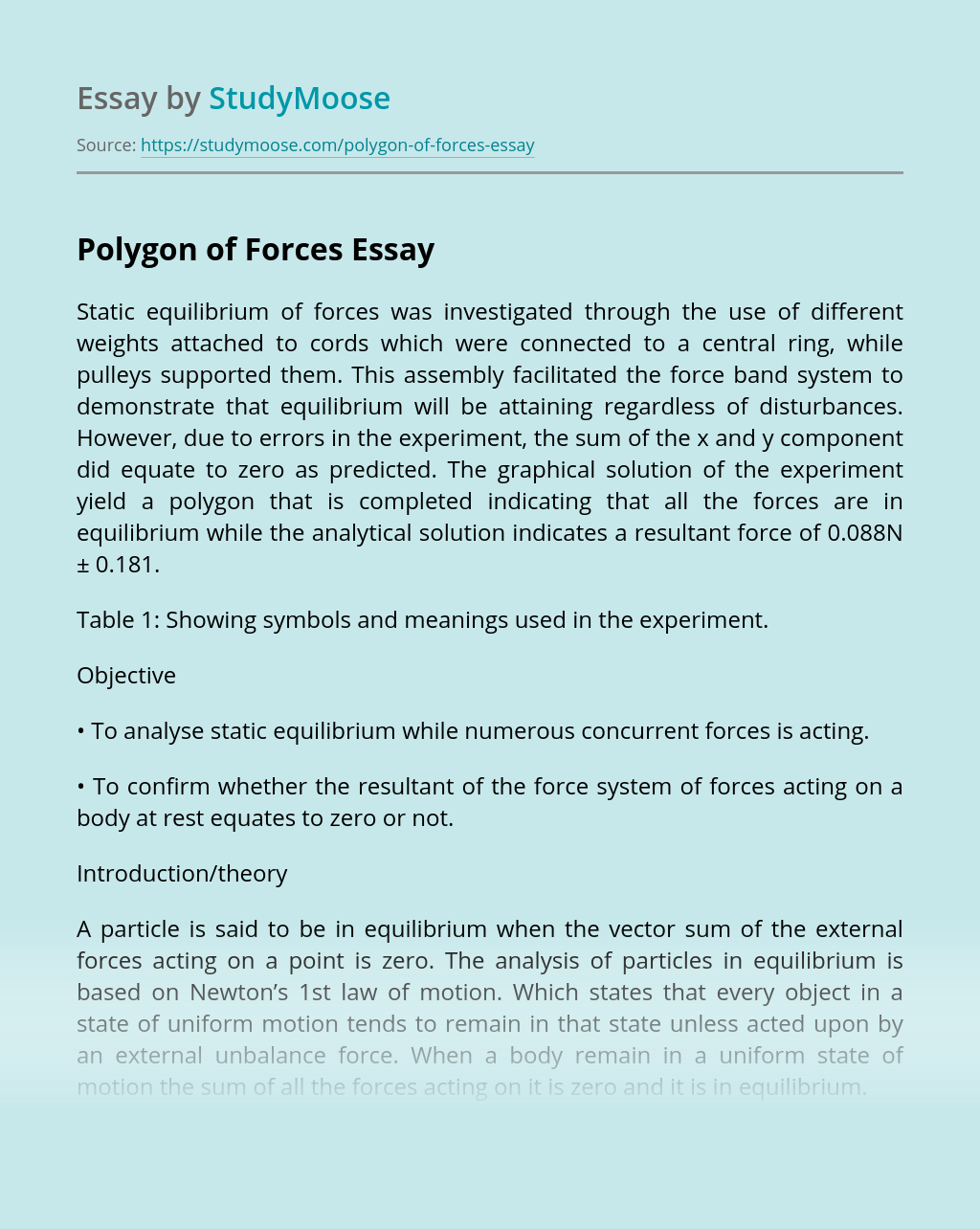 1. Objective: The objective of this experiment is to demonstrate the bending of a bean when loaded at the center of its length and examine its deflection when positioned in two different ways, when the flat side of the beam is support and when the thin side is supported. In addition, try to find linear...

Marie Curie Marie Curie was born Maria Sklowdaska on November 7th, 1867. She was the fifth and youngest child in her family. Times were tough living in the Russian parition of Poland, and her family suffered many financial hardships. She attended school and graduated as Valedictorian, but all the years of stress lead up to...

Get Essay
Separation of a Mixture of Solids

I really enjoyed this lab. After reading the introduction I started by making my own flow sheet of how I thought this lab would work. I was reminded about solubility which is defined as the amount of the solute that will dissolve in a given amount of solvent and that the extent to which a...

The main objective of this lab is to identify the given unknown organic compounds with various methods. Identification of an unknown compound is important to perform through the process of melting point (M.P), boiling point (B.P) and Infrared spectroscopy (I.R). Index of Hydrogen deficiency (IHD) and elemental analysis makes an experiment more efficient in determination...

Debate Between Rationalism and Empiricism

Werner Heisenberg (5 December 1901 – 1 February 1976) was a German theoretical physicist who made foundational contributions to quantum mechanics and is best known for asserting the uncertainty principle of quantum theory. In addition, he also made important contributions to nuclear physics, quantum field theory, and particle physics. Heisenberg, along with Max Born and...

Electric shock: When used inappropriately, electric shock can result and cause serious injury. Explosion and fire caused by electrical sparks, short circuits or overload heating in the presence of flammable material can occur. Parent or teacher supervision is required and was present during the use of electrically powered equipment (electric drill and freezer) in this experiment....